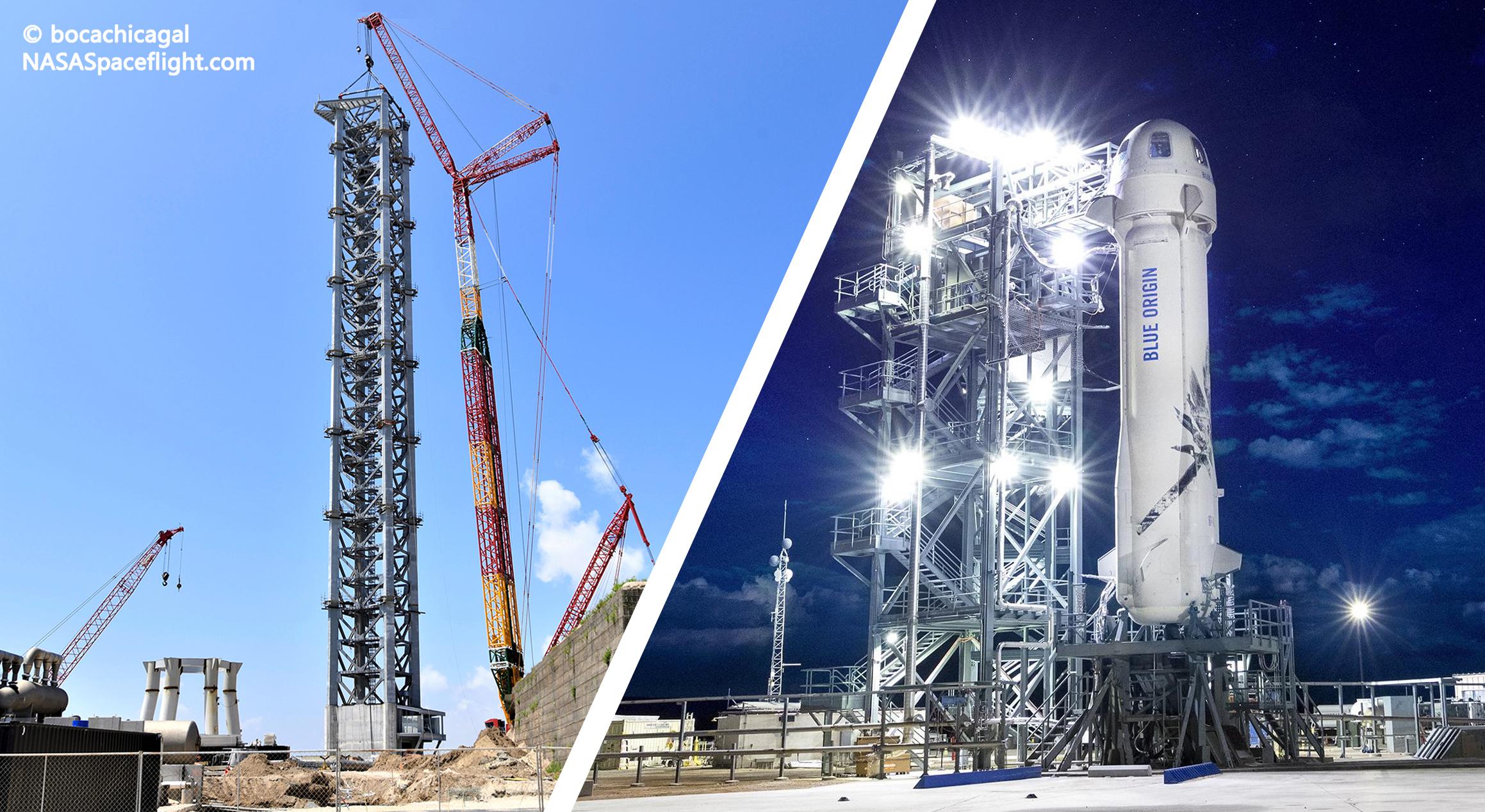 On Sunday morning, SpaceX began the process of installing the last prefabricated section of Starship’s skyscraper-sized ‘launch tower’ around the same time as startup Blue Origin kicked off a preflight briefing for its first crewed suborbital launch.

Though both events are almost entirely unconnected and have no immediate impact on each other, the simultaneity almost immediately triggered comparisons between one of the most important media briefings in Blue Origin’s 21-year history and an average busy day at SpaceX’s South Texas Starship factory and launch site. Almost exclusively funded by Amazon founder and CEO Jeff Bezos since it was founded in September 2000, around two years before SpaceX, Blue Origin is on the cusp of its first crewed launch less than two weeks after Virgin Galactic completed its first fully-crewed test flight above 80 km (~50 mi).

Approximately 600 miles southeast of Blue Origin’s Van Horn, Texas launch and test facilities, in a different corner of the vast state, SpaceX was preparing for the latest in a long line of steps towards the completion of an orbital launch site for Starship – potentially the first fully reusable orbital rocket ever built.

First revealed more than three months ago in a cryptic post from owner Jeff Bezos, Blue Origin is scheduled to launch passengers on its New Shepard rocket for the first time ever, marking the end of an extraordinarily long development period. Designed to be fully reusable, New Shepard is a small single-stage rocket powered by one liquid hydrogen and oxygen-fueled BE-3 engine capable of producing approximately 500 kN (110,000 lbf) of thrust at liftoff. Designed exclusively for the purpose of ferrying a few tourists above a mostly arbitrary 100 km (~62 mi) line separating Earth’s atmosphere and “space,” New Shepard is about the same diameter as SpaceX’s Falcon 9 and Falcon Heavy rockets but is just 15m (~50 ft) tall.

The small rocket launched for the first time in April 2015 and reached an apogee of ~94 km but instability ultimately destroyed the first New Shepard booster during its first landing attempt. Blue Origin successfully launched and landed New Shepard on its next test flight in November 2015, culminating in Bezos’ infamous “Welcome to the club!” comment after SpaceX successfully recovered a Falcon 9 booster for the first time one month later.

Along those lines, on Saturday, July 17th, SpaceX teams attached a massive crane to the seventh prefabricated section of a ‘launch tower’ that could eventually support Starship and Super Heavy stacking – and maybe even catch ships and boosters. On Sunday, not long after daybreak and about an hour before Blue Origin’s New Shepard-16 preflight briefing, that tower section lifted off under the watchful eye of several unofficial cameras operated by NASASpaceflight, LabPadre, and others. By the end of Blue Origin’s briefing, most of which involved executives or senior employees reading from scripts and none of which offered a look at actual flight hardware or “astronaut” preparations, the eighth launch tower section was mostly in place, creating a structure some 135m (~440 ft) tall.

By the end of NASASpaceflight.com’s unofficial six-hour stream, the outlet’s excellent and unaffiliated coverage of SpaceX erecting part of a relatively simple tower for the seventh time had been viewed more than a quarter of a million times. By the end of Blue Origin’s official preflight briefing for a crewed launch set to carry the richest person on Earth, the company had accrued around 20,000 views on YouTube.

Some might see ten times as many viewers flocking to an unofficial live stream of fairly mundane SpaceX construction over a briefing for the first crewed launch of a fully-reusable suborbital rocket and scoff. For those who watched both broadcasts, it’s likely less than shocking that spaceflight and rocket fans almost universally sided with a livestream showing something – anything! – happening over what amounted to a camera pointed at five people reading (mostly stale) statements off of teleprompters.

Barely 24 hours away from Blue Origin’s most significant launch ever, the company – save for a few low-res clips from Jeff Bezos – has yet to share a single new piece of media highlighting the mission’s actual New Shepard rocket, crew capsule, astronaut preparations, flight suits, launch pad, or any of the other dozens of things most spaceflight fans – and people in general – tend to get excited about. For whatever reason, Blue Origin has also worked with Texas to shut down the only quasi-public viewing area less than 10-20 miles away from New Shepard’s launch pad despite never having done so in 15 test flights.

SpaceX, on the other hand, may not have always been a perfect neighbor in Boca Chica but the company has mostly accepted the buzzing, near-continuous presence of spaceflight fans and members of the media who come to South Texas to see Starbase in person. More recently, SpaceX has actively let at least two media outlets (NASASpaceflight and LabPadre) install and operate several robotic cameras overlooking Boca Chica’s Starship factory and pad.

It’s impossible to condense it into one or two simple differences but it’s safe to say that SpaceX’s relative openness and a general willingness to engage with media and let public excitement and interest grow uninterrupted (when possible) is part of the reason that mundane SpaceX goings-on can accumulate a magnitude more interest on unofficial channels than an official briefing for the most important event in Blue Origin’s history.