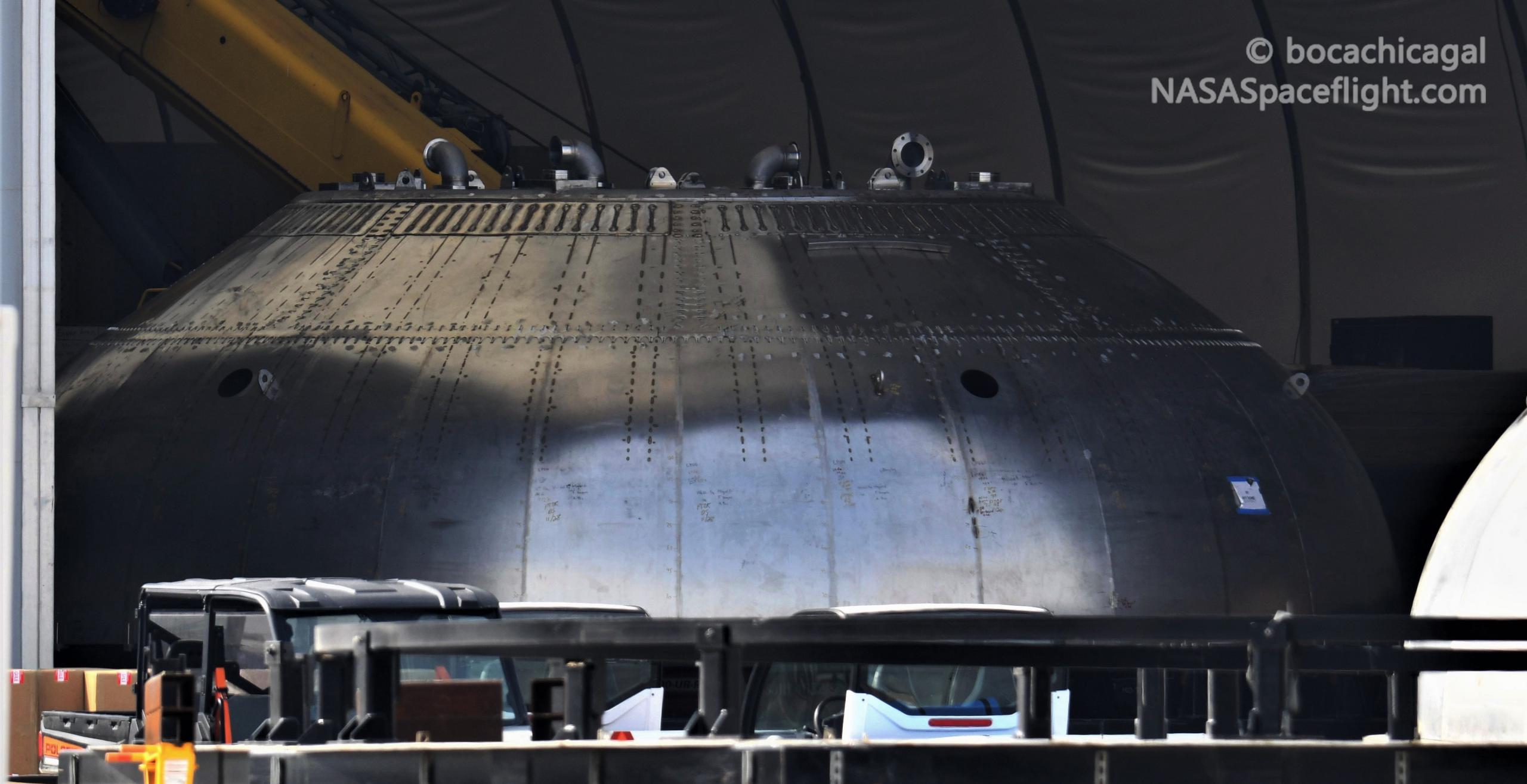 What is arguably the most complex and important part of SpaceX’s Super Heavy booster prototype has made its first appearance at the company’s South Texas Starship factory.

Following in the footsteps of Starship development, Super Heavy has been able to extensively borrow from the many lessons learned over the course of building, testing, flying, and building more Starship prototypes. SpaceX is able to use virtually identical materials, equipment, and techniques to build and assemble both Starship and Super Heavy propellant tank barrels and domes, while both stages will also share an extensive foundation of avionics, plumbing, propulsion, and ground systems, among other things.

In fact, lacking a conical nose, secondary (‘header’) propellant tanks, flaps, a reusable orbital-class heatshield, and vacuum-optimized Raptor engines, Super Heavy is actually substantially simpler than the Starships it will one day launch towards orbit. However, not everything is simpler. Super Heavy will ultimately be the largest and most powerful liquid-fueled rocket stage ever built or tested – power that demands as many as 28 Raptor engines and a thrust structure capable of feeding and withstanding them.

Designing, building, and testing such a thrust structure is arguably one of – if not the – most challenging engineering hurdle standing between SpaceX and its aspirational Super Heavy design. It’s the first of those Super Heavy-specific thrust structures – in the form of a tank dome – that was spotted at SpaceX’s Boca Chica, Texas Starship factory on January 25th, roughly six weeks after its main component was spotted.

Unlike Starship, which relies on a small central ‘thrust puck’ fit for three sea-level-optimized Raptor engines and plans for three larger vacuum-optimized engines that will attach to the side of its hull, Super Heavy’s current design iteration features as many as 28 sea-level Raptors. Aside from CEO Elon Musk revealing that Super Heavy would have a central cluster of eight engines, the precise configuration has been a mystery.

The reality, as recently captured in photos above by NASASpaceflight photographers and contributors Mary (BocaChicaGal) and Jack Beyer, appears to be a much larger donut-shaped ring with space for eight gimballing Raptor engines. The remaining 20 Raptor engines would then be installed – possible mounted to the skirt, the thrust dome, or both – in the space left between the thrust donut and Super Heavy’s skirt.

Either way, the structures behind the two rings of engines will have to withstand at least 6600 metric tons (14.5 million lbf) of thrust at liftoff – approximately twice the thrust of Saturn V and Soviet N-1 rockets and more than three times the thrust of SpaceX’s own Falcon Heavy. Holding eight Raptors, the donut structure and dome recently pictured for the first time will also have to singlehandedly stand up to 1600 tons (3.5 million lbf; two Falcon 9s’ worth) of thrust while gravity, acceleration, and some 2500 tons of supercooled liquid oxygen push in the opposite direction.

In simpler terms, the business end of Super Heavy poses an extraordinarily difficult challenge and SpaceX has already built the first true-to-life prototype, with future iterations likely close on its heels. Much like Starship, if/when prototype booster number one (BN1) passes basic pressure and cryogenic proof tests, SpaceX will likely focus the rest of Super Heavy’s first test campaign on stressing the rocket’s unproven thrust structure to its design limits.

Like Starship, SpaceX will likely try to begin with nonexplosive methods, perhaps using a similar – but far larger – series of hydraulic rams to less riskily simulate the thrust of 8-28 Raptor engines. A steel structure spotted on a recent aerial overflight of SpaceX’s Starship factory might even fit the bill for such a structure, though only time will tell.

Based on an apparent acceleration of Super Heavy assembly work that may have started last week, as well as the crucial appearance of the last missing puzzle piece in the form of BN1’s thrust dome, the first booster could be completed and ready for testing sooner than later.