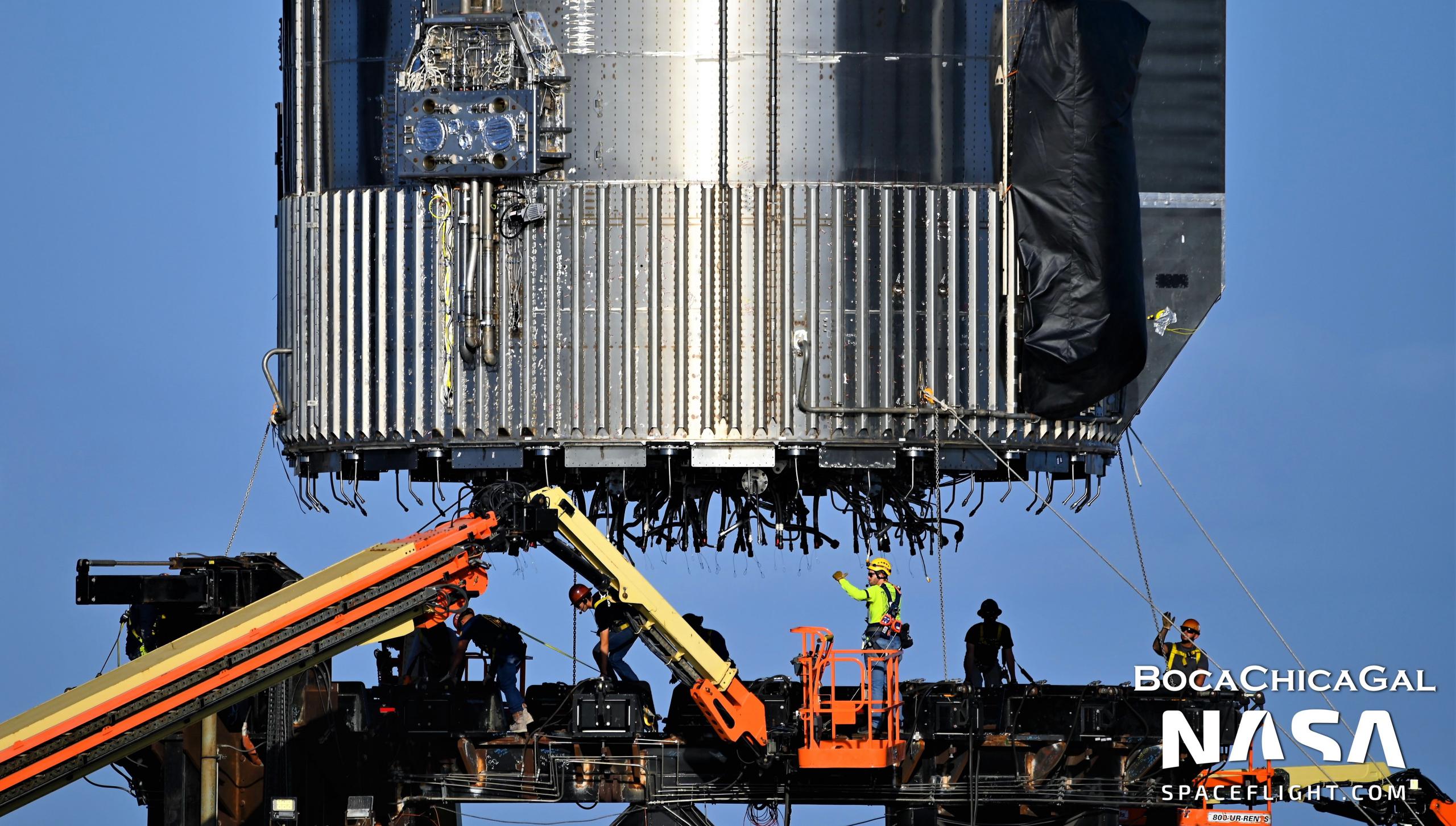 SpaceX has begun installing new ‘Raptor 2’ engines on Super Heavy Booster 7 after the prototype completed a range of tests and returned to the company’s South Texas ‘Starbase’ rocket factory.

Earlier this month, SpaceX transported Booster 7 (B7) in the opposite direction, returning the 67-meter (~220 ft) tall rocket to Starbase’s orbital launch site (OLS) for the second time after it was forced to head back to the factory for repairs. Repairs completed, SpaceX dove headfirst into the process of verifying that the booster had been returned to full health and immediately filled its tanks to the brim with at least 3000 tons (>6.5M lb) of liquid nitrogen and oxygen – better known as a cryogenic proof test.

Less than 48 hours after completing its first post-repair test, Booster 7 sailed through another full cryoproof test without losing a beat. On May 13th, two days later, SpaceX attached a crane to Super Heavy B7 and removed it from the orbital launch mount before rolling the rocket back to Starbase’s build site on May 14th. Without official confirmation, which is increasingly rare, it was impossible to determine the results of the testing with certainty, but the speed of the process and Booster 7’s rapid launch mount removal made the two most extreme outcomes the most likely.

A quick return to the build site could have been explained by a significant vehicle failure or a major issue with SpaceX’s repair job – no point in continuing to test a vehicle that can’t be fully tested. On the exact opposite hand, a near-perfect test campaign in which all objectives were more or less achieved without major hiccups could also explain the quick return. In general, the evidence was in favor of the more optimistic explanation. Had a major issue been uncovered during the first post-repair cryoproof, it’s difficult to imagine that SpaceX would have completed the exact same test – in full less than 48 hours later.

However, SpaceX moved an in-situ Raptor engine installation stand towards Booster 7 and the orbital launch mount shortly before testing restarted, hinting – for the moment – that the company wanted to begin installing Raptor engines immediately after cryoproof testing. But mid-way through testing, the stand was moved back to its storage area and Super Heavy was instead removed from the mount and returned to the factory, adding a little uncertainty.

Concerns were immediately assuaged on May 17th when SpaceX was spotted moving Raptor engines from a production tent to the ‘megabay’ assembly building containing Booster 7. While the location of the new bay makes it difficult to peek inside from public viewpoints, preventing direct confirmation, it’s very likely SpaceX has begun installing new Raptor 2 engines on Super Heavy B7.

Additionally, confirming some of the more optimistic speculation about SpaceX’s decision to move Booster 7 back to build site, two of the three Raptor engines spotted on May 17th were also labeled “E26” and “E28.” Unless SpaceX’s engine numbering conventions have changed, the labels identify the engines as three of 20 ‘Raptor Boost’ engines that will ultimately populate the outer ring of Super Heavy B7’s aft end. More importantly, the installation of any Raptor Boost 2 (RB2) engines likely indicates that SpaceX has decided to install a full set of 33 Raptors on the booster before kicking off static fire testing.

To limit risk, SpaceX could have begun test-firing Booster 7 with just 1-3 Raptor engines installed and gradually added more as confidence grew. Instead, SpaceX appears to have accepted the added risk of losing 33 brand-new Raptor 2 engines in one fell swoop in return for the possibility of a much faster test campaign. If there are no major surprises during static fire testing, in other words, Booster 7 could be ready for flight far more quickly if the process begins with all 33 engines already installed. Installing Booster 7’s Raptors, heat shield, and aerocovers will be easier back at the build site.

Doing it all at once should also help prevent Booster 7 from suffering Booster 4’s fate and wallowing, unfinished, for months without completing a single useful test. If the gamble works, the first stage of a two-stage Starship could be ready for an orbital launch attempt in just a few months. If the gamble fails and Booster 7 is damaged, destroyed, or otherwise unable to pass the necessary tests, SpaceX will simply move on to Booster 8 sooner than later, having wasted less time on a more cautious Booster 7 test campaign.

It’s unclear how long it will take SpaceX to install all 33 Raptors, construct a heat shield around those engines, and finish buttoning up the rest of Booster 7. In an adjacent assembly bay, SpaceX appears to have nearly finished assembling a similarly upgraded Starship – Ship 24 – that’s first in line to ride Booster 7 into space. The company has also tentatively requested road closures for three 12-hour test windows on May 23rd, 24th, and 25th that either vehicle could use.