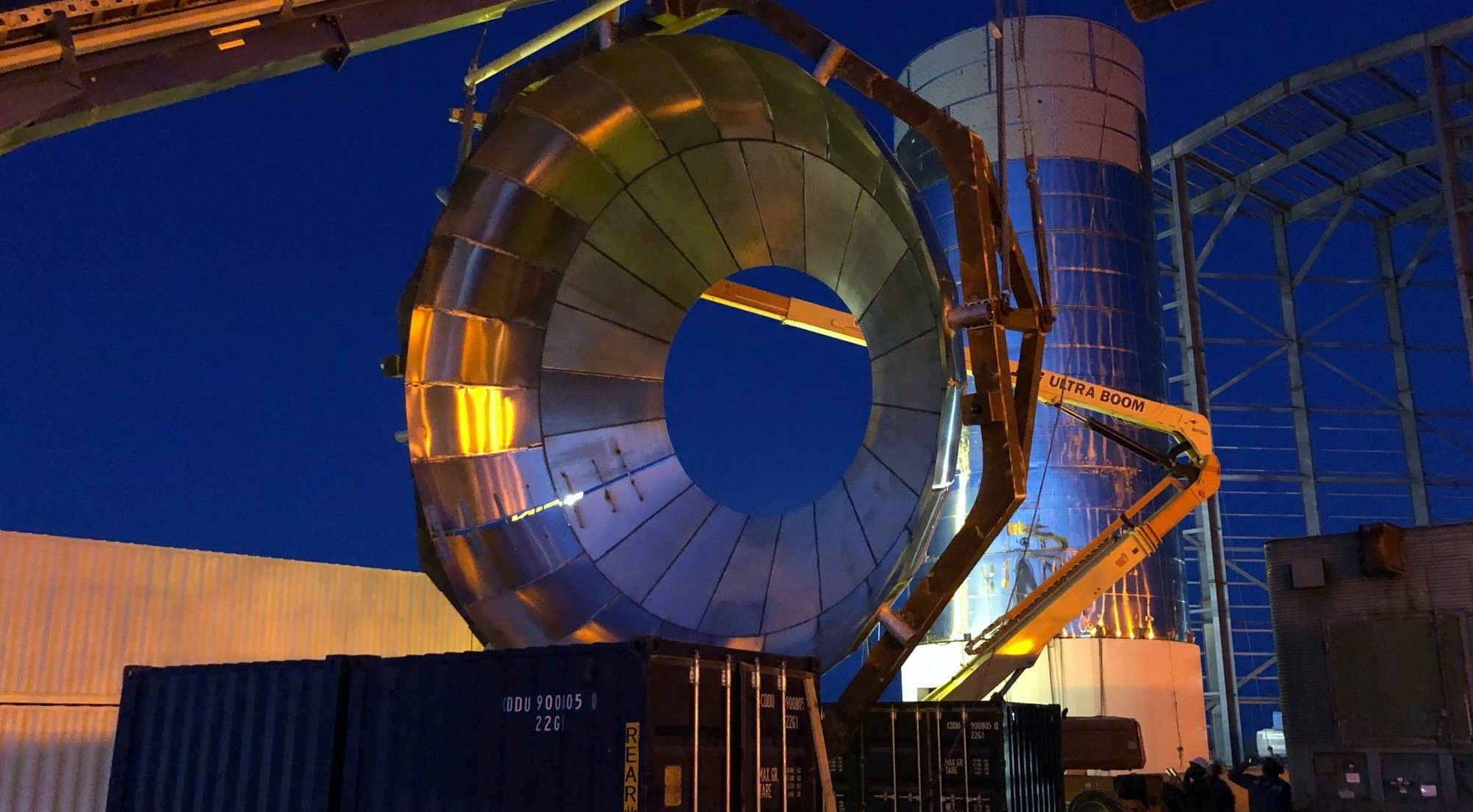 This is the latest visible step towards the completion of one of SpaceX’s two “Mk 1” Starships, said by Elon Musk to be the first orbit-capable prototypes. Per recent tweets, either or both of the prototypes – being built concurrently at separate sites in Florida and Texas – could be ready for their first flight tests as early as September or October 2019.

Set to be powered by up to three sea-level (SL) Raptors and three vacuum-optimized Raptors (RVacs), Musk has stated that SpaceX’s first two orbital Starship prototypes will likely begin flight testing with just the three SL engines installed. Recently, the SpaceX CEO did, however, indicate that development of Raptor’s vacuum variant – postponed as of a September 2018 update – had been reprioritized and said that it could actually be ready sooner than later.

Raptor Vacuum will have a significantly larger nozzle compared to the sea level engine it will be based on. According to Musk, RaptorVac will have a nozzle diameter of roughly 2.8m (9.2 ft), while the SL Raptor features a ~1.3m (4.2 ft)-diameter nozzle. With a larger diameter nozzle, a chemical rocket engine can technically generate more thrust and is significantly more efficient due to an increased expansion ratio, meaning the difference in the diameter of the nozzle exit and combustion chamber throat.

In the very simplest sense, this efficiency and thrust increase comes from the fact that a longer nozzle allows the exiting gas (reaction mass) to reach a higher velocity, thus conveying more momentum onto the rocket it is propelling.

Starship’s Raptor engines, of course, use liquid methane as fuel and liquid oxygen as their oxidizer. According to SpaceX, fully fueling a combined Super Heavy and Starship stack will require an incredible ~5000 tons (11 million pounds) of propellant – ~1500 tons for Starship and ~3500 tons for Super Heavy.

To contain such a huge amount of fuel and oxidizer, Starship (and Super Heavy) must effectively be turned into extremely mass-efficient pressure vessels, capable of supporting something like 20 kilograms of propellant with every kilogram of rocket structure.

SpaceX’s installation of bulkheads in the Texas Starship prototype are thus an inherent indication that the rocket is being readied to play the role of a massive, ultra-strong pressure vessel. While sitting vertically, a fueled Starship’s tank domes will be subjected to immense pressures and forces from the sheer weight of the liquid oxygen and methane held above them.

Additionally, the rearmost dome will likely be partially or fully integrated into Starship’s thrust structure, meaning that it will simultaneously be subjected to the thrust of 3-6 Raptors (as much as 600-1200 tons of thrust) and the gravity of 300 metric tons of methane. It’s unclear if SpaceX is planning to reinforce Starship and Super Heavy tank bulkheads with structural add-ons, but it’s safe to assume that some level of reinforcement will be required.