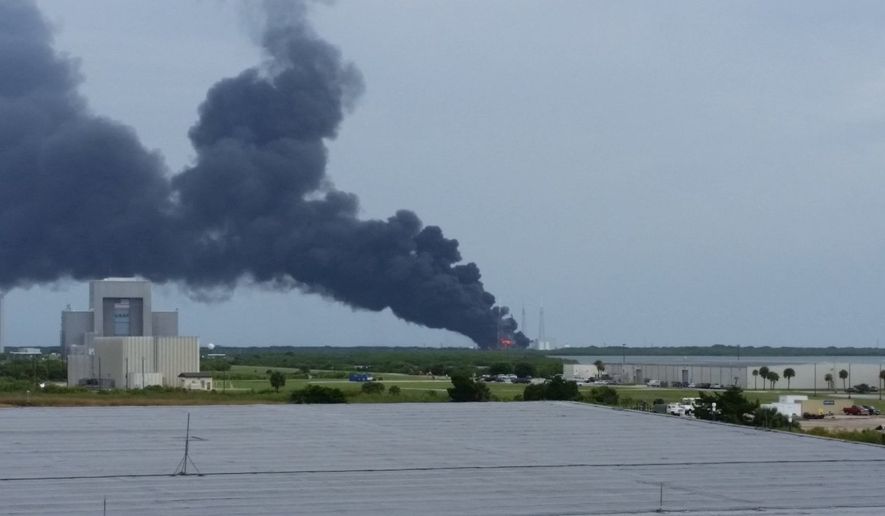 Updated 3:04pm: A new video surfaces on YouTube from USLaunchReport that provides a closer look at the Falcon 9 explosion that took place today at Cape Canaveral during a static fire test. Some viewers noted what it appears to be a projectile flying across screen (1:10min) right before the point of explosion. Is this the “anomaly” SpaceX was referring to?

A SpaceX Falcon 9 rocket exploded on its launch pad Thursday morning while conducting a static fire test at the Cape Canaveral Air Force Station in Florida. Witnesses of the incident took to social media to describe hearing several explosions followed by a fireball and plume of black smoke seen rising from SpaceX’s launch complex shortly after 9 am local time.

“We were sitting here and all of a sudden it sounded like a sonic boom and the building started to shake,” said Denny Waktins of the Titusville Area Chamber of Commerce. “There were a couple of minor booms after that and then we went outside and saw the smoke plume. It was a well-defined plume, not like a controlled burn.”

Local meteorologist Jesse Hawila captures the smoke as a result of the explosion on radar.

Wow. You can see the smoke from the #SpaceX explosion in Cape Canaveral on radar. pic.twitter.com/IWqL7IGpU4

A representative from SpaceX confirms the incident via a statement, “SpaceX can confirm that in preparation for today’s static fire, there was an anomaly on the pad resulting in the loss of the vehicle and its payload. Per standard procedure, the pad was clear and there were no injuries.”

The rocket was scheduled to launch this Saturday, September 3 on a mission to deliver Spacecom’s AMOS-6 communication satellite into geostationary transfer orbit. The satellite was to be used as part of social media giant Facebook’s mission to bring affordable internet access to less-developed countries.

Today’s incident occurred during standard rocket preparations where Falcon 9’s nine Merlin engines undergo a test-firing on a launch pad. It’s the company’s only other catastrophic failure since June of least year when a Falcon 9 exploded in flight while on a NASA mission to carry supplies to the International Space Station.