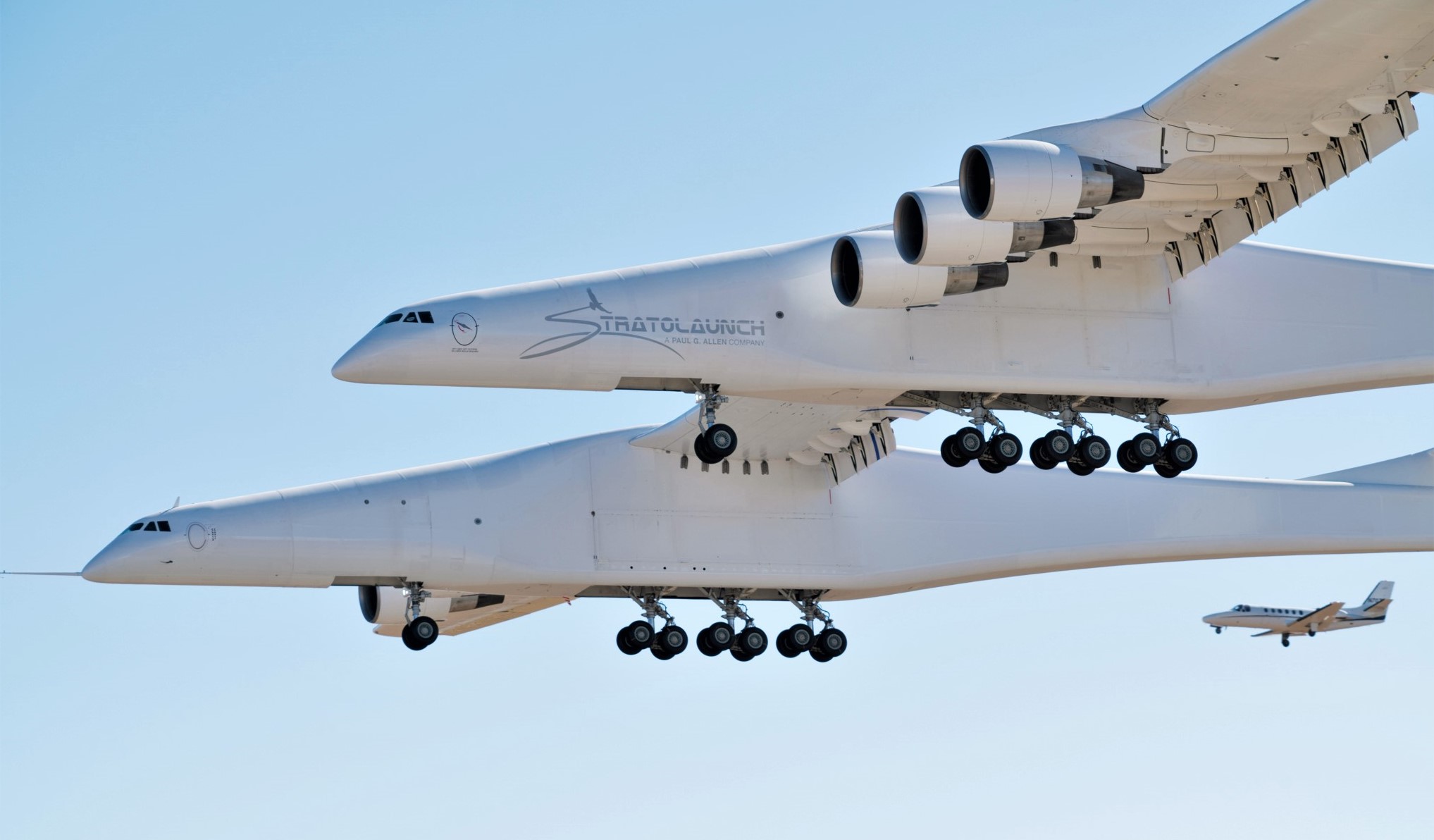 Stratolaunch's Roc took flight for the first time ever on April 13th, 2019, and it's looking likely that the aircraft may finally have the opportunity to fly again. (Stratolaunch)

In June, parent holding company Vulcan Inc. – led by Allen’s sister after his death – planned to cease Stratolaunch’s operations in anticipation of a total liquidation – including the aircraft, intellectual property, and facilities – worth up to $400 million. However, the Roc may live to fly once again after an official October 11th announcement, in which Stratolaunch indicated that the company has “transitioned ownership and is continuing regular operations.”

Prior to the announcement, NASASpaceflight.com photographer Jack Beyer posted photos to twitter appearing to show new activity at Stratolaunch’s Mojave Air and Space Port hangar. The post garnered a response from Nicola Pecile – test pilot with Virgin Galactic – who stated that operations seem likely to resume “in a few weeks” citing that hiring notices were recently sent to members of the Society of Experimental Test Pilots (SETP).

Initially, Allen developed the company to launch air-to-orbit rockets from a carrier aircraft mid-flight. To say that Stratolaunch has experienced turbulence during development may be an understatement. Since its inception, conceptualization redesigns and failed partnerships with various rocket launch vehicle companies have plagued operational efforts.

In 2011 Stratolaunch partnered with Elon Musk’s SpaceX to develop a multi-stage launch vehicle named the Falcon 9 Air that would be dropped from a carrier aircraft. The Falcon 9 Air would have been capable of delivering payloads up to 6,100kg (13, 400lbs) to low Earth orbit (LEO) from flight altitudes of 30,000ft with the assist of 4 Merlin 1D engines – the same engines that now propel SpaceX’s Falcon 9 and Falcon Heavy boosters.

In 2012 SpaceX and Stratolaunch amicably parted ways with SpaceX citing design alterations that no longer worked with their envisioned Falcon 9 Air launch vehicle.

Following the dissolution of the partnership with SpaceX, Stratolaunch partnered with Orbital Sciences Corp (Orbital ATK) – now a subsidiary of Northrop Grumman – to develop the Pegasus II which was ultimately shelved to pursue in-house developed launch vehicles. Following the death of Paul Allen in 2018 that plan was also abandoned as Allen’s sister, Jody Allen, set an exit plan for the company in early 2019 according to Reuters.

However, the recent buy out by a mystery purchaser has seemingly breathed new life into Stratolaunch as the Twitter announcement also mentioned that the company will now “bring the carrier aircraft test and operations program fully in-house.” What this means for the future of the Roc and any air-to-orbit launches remains unclear.

The Roc itself is comprised of twin fuselages connected by a reinforced center wing and features an incredible wingspan of 117m (385ft), 28 landing gear wheels, and six Pratt & Whitney PW4056 engines – as well as many other components – salvaged from donor Boeing 747-400s. It is both the largest and heaviest aircraft (excluding payload) to have ever flown.

With a nickname derived from a mythical bird so large it could carry an elephant in flight, it would have been a tragedy if the one-of-a-kind aircraft were to be scrapped, mothballed, or placed in a museum after just a single flight. With Hope Stratolaunch’s October 11th announcement, the future of the massive plane has thankfully stabilized in spite of significant uncertainty, and hope remains that Roc’s new owner(s) will find a way to continue flying the aircraft.