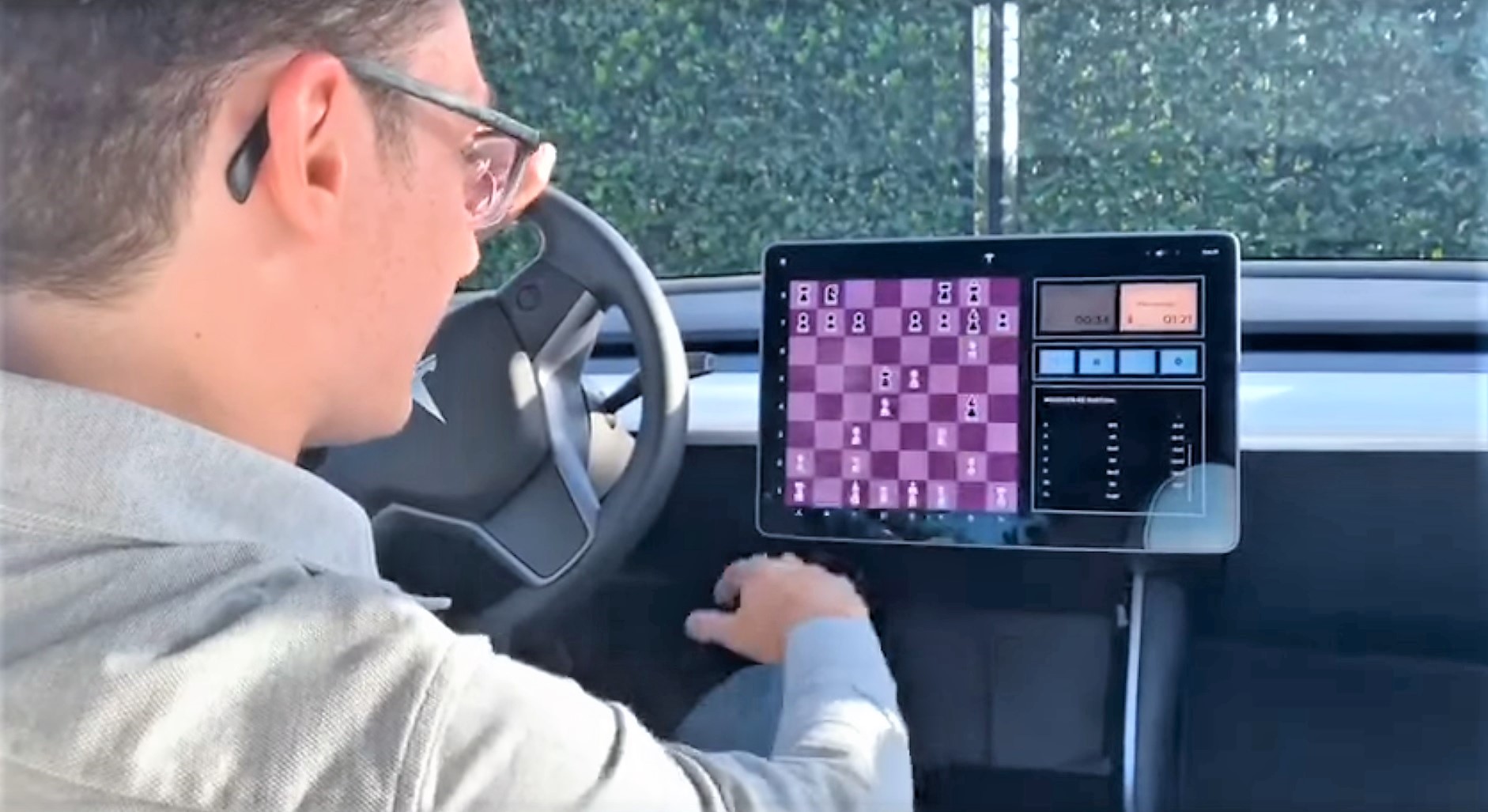 Tesla’s in-car gaming experience was designed to primarily entertain the average, everyday Supercharger visitor, but sometimes their all-electric vehicles get the chance to flex their software muscles and take on a true human champion. Chess Grandmaster Fabiano Caruana, who currently holds the #1 Chess rating in the United States, recently challenged a Model 3 as his opponent in Tesla’s version of the game.

During his in-car Tesla Chess challenge, Caruana gave a play-by-play explanation and specifically expressed his approval of the computer’s moves throughout. “It’s not making any mistakes…[It’s] playing quite impressively,” he commented in the beginning of the game. At one point, Caruana compared the software’s strategy to a live player. “Now, if it were a human, I’d hope it would be slightly scared. But I don’t think a Tesla gets scared.” The fairly quick Chess match ended in a victory for Caruana, but it seemed to be a satisfying win overall. “I’ve won the game, but it wasn’t an easy one. Not at all…it was a challenging game,” he concluded.

Chess joined the Tesla Arcade lineup just within the last week, and its arrival was full of human-vs-computer competitive spirit. “When your car can do zero-to-sixty faster than you can make your next move, we call that a checkmate,” the company’s official Twitter account teased in its announcement of the game’s release. The tweet was also accompanied by a western-themed video.

It’s not every day that I get to play against a chess-playing car! Check out the video of my match against a @Tesla: https://t.co/h1s6kQegzY. I won this round … so when are we playing @elonmusk?

Matchups like the Model 3 vs. Caruana are a good example of the type of fun Tesla aims for when including entertainment features in its electric vehicles. The California-based car maker has even more games coming to the Tesla Arcade in the near future as part of the Version 10 (V10) firmware release. “V10 will include several games & infotainment features, improved highway Autopilot, better traffic light & stop sign recognition & Smart Summon,” CEO Elon Musk recently announced via Twitter.

During an appearance at the 2019 E3 Coliseum event, Musk and legendary video game designer Todd Howard noted that Cuphead, widely regarded as one of the finest run-and-gun indie games, and Fallout Shelter, a mobile title based on the blockbuster gaming franchise, were coming soon to the Tesla Arcade. While their release has not been specifically mentioned as part of V10, the timing does seem to match up and a firmware release with major game inclusions would make sense. A new racing game played with the steering wheel called Beach Buggy 2: Tesla Edition was added also last month to replace Pole Position, and support for a second controller was released alongside Chess.