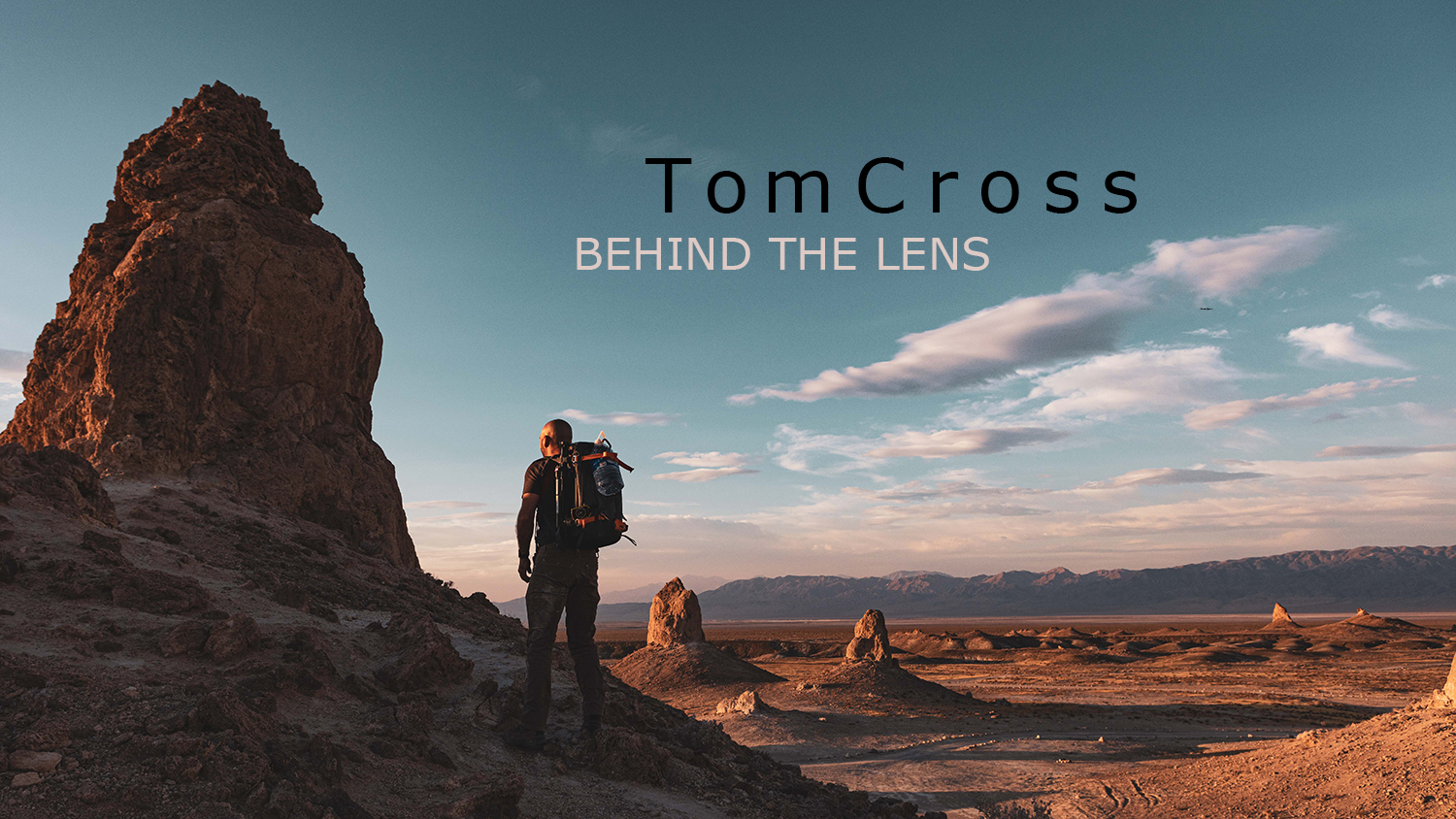 Tom Cross | Behind the Lens: “Life on the Edge”

You recognize me as a rocket photographer, but I’m often asked about what I shoot when I’m not photographing a launch. In my blog, I’ll take you with me on some of my personal adventures with my camera, and dive into my life Behind the Lens.

Through writing, I’ll share pieces of life-changing, frightening, and always extraordinarily beautiful places and moments I’ve experienced. I think you’ll see that my passion for photographing rockets isn’t that far removed from my passion of photographing Earth. I’m an adventure photographer when I’m not a rocket photographer.

The greatest journeys I’ve been on, so far, have been in the South Western United States. The terrain is extraterrestrial. It’s not oversaturated with cities, I can drive a reasonable amount of time and get away from light pollution and busy interstates. The mountains have the most dynamic weather and environmental differences. You can be in the hottest part of the earth, Death Valley, and see snow-capped mountains on the horizon. There’ll be a drought in one location and waterfalls from snowmelt in another, all within driving distance. It’s nature at its richest and most intense.

Located in Arizona, the South Rim of the Grand Canyon, carved by the sediment-rich water from the Rocky Mountains in Colorado, hence, the name ‘Colorado River’ at the bottom. It’s been flowing for at least 5 million years, scraping the layers of earth to expose time before dinosaurs, even time before life. The very bottom of the Grand Canyon is made of exposed rock that is 2-billion years old, a layer of time where no fossils are located. You can really get a sense of the earth as an actual planet down there.

The size of the canyon is unfathomable. If we’re in a simulation, the display is too much data for our minds to process. There’s so much texture, yet no detail. There’s a lot of life, but no movement. You can see the blue haze of the atmosphere as you look across to the North Rim. You feel like it’s not far, but it’s a couple of miles across. So, naturally, I wanted to toss a rock over the edge. I expected it to go pretty far, instead it actually just appeared to drop straight down. My strongest throw is seemingly very weak and it was that moment the earth just put me in my place…for the first time.

I’m not afraid of the edge of cliffs. For better or worse, my heart rate doesn’t change a bit. So I laid down on my stomach with my head hanging over the edge of the South Rim. I blocked out the sounds of people around me, the safety handrails, imagined all of humanity gone for a while to get the sense that it was just me and this planet.

I thought of how the wind swirled through the canyon while watching majestic vultures, called Condors soar around inside. In my mind, I played a video of what the snow must look like melting in the Rockies and water trickling through the rocks while gravity pulls it down to a valley to form the river that’s been flowing for millennia. I wondered about the temperature differences between the geological layers, there’s a 20-degree difference between the top of the canyon and the bottom, the bottom is warmer. I tried picturing the ancient oceans and deserts that had formed here time and time again as earth went through its natural cycles. Then, I sat down on the edge with my feet hanging over, I could only capture the wow factor of this feeling by using a fisheye lens on my camera. 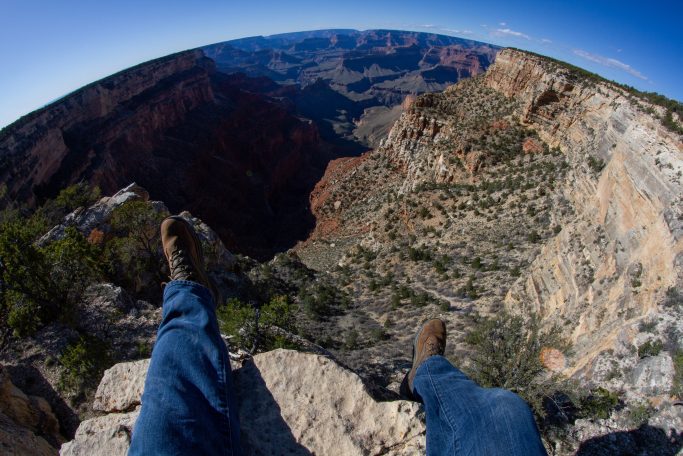 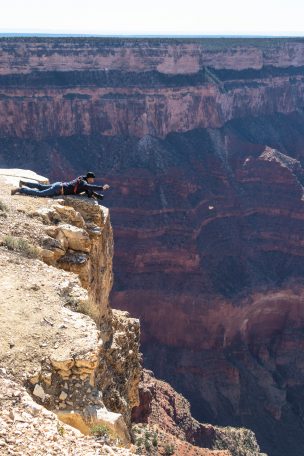 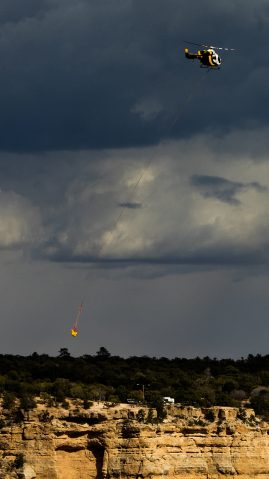 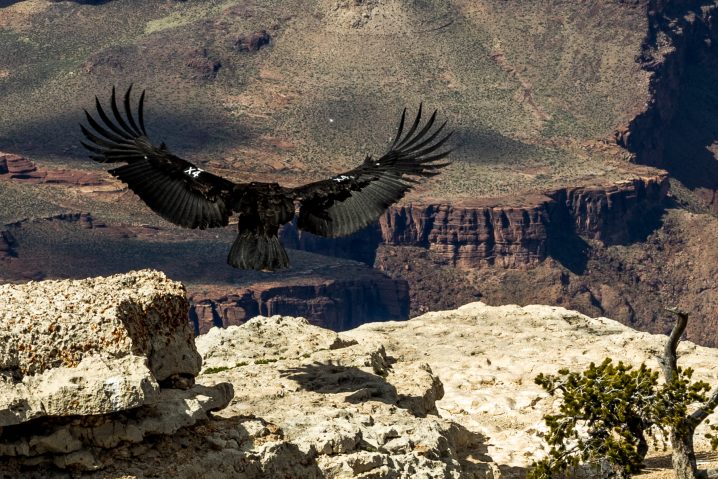 I believe humans are meant to explore. We’re supposed to migrate to other locations when seasons change. To me, it feels as natural as our circadian rhythm but we’ve interrupted that natural cycle by planting ourselves into jobs which often have no greater purpose than a comfortable paycheck. I spent a lot of time reading books by physicists like Steven Hawking, Brian Cox, Carl Sagan, among others who have explored our location in the cosmos and what we know about our position within it. Having a fulfilling career that serves a greater purpose to humanity and being able to explore our vehicle in the cosmos is not a dream.

Back to the adventures; I’ll take you on a soul searching hike through the Grand Canyon. I hiked 21 miles in 2 days, down to the Colorado River on one trail and out of the Canyon on another trail. It was a personal challenge I set for myself and the first time I’d been in a situation like it. I had all of the supplies I thought I’d need for such a hike. I was solo on this hike, all situations had to be handled on my own with only the items I had with me. How does photography fit into this? There are unexpected moments of beauty where the earth just floors me. It reminds me of how small and insignificant we are as an animal. How dangerous it can be and how precious. It gives us life and it takes it away. It’s to be appreciated. I try to capture those moments.

They weren’t conducting a rescue, it was a recovery

Humans, ugh… We are raised to believe we’re the top of the food chain. But we’re a virus to this cellular organism called Earth. These days, there are talented teams of people who are actively doing anything about reversing and preventing more damage to our home & species. Tesla and SpaceX are the pioneers of this movement. For the first time, we have the tools to help fix it in the form of products that we can purchase to leave less of an impact during our time here. Remember, you will die one day, but your impact remains…

In order to remove this inherited feeling of superiority our species is raised with, I had to feel exposed to danger, I had to make sure earth had its way with me. Whatever happens, I’d work my way through it. The danger is accessible in the Grand Canyon, signs on pathways remind people that they will die if they’re not mindful of what they’re doing.

Just before my hike down, I got a dose of reality. A rescue helicopter dropped off a rescue team to a nearby spot of the canyon then it flew away. I wasn’t able to get a clear view of the team in the canyon because National Park Rangers had the trails leading to the location closed. They weren’t conducting a rescue, it was a recovery. The rumor I heard in a restaurant, is that a family was standing near the edge for a photograph with the canyon in the background and someone had slipped off the edge. When the helicopter returned, it took only a few moments for the team to connect to the line and airlift the body from the canyon.

The next day, I’d be doing my solo hike…

Next week, I’ll take you down to the bottom of the Grand Canyon, through the South Kaibab trail and out of the Bright Angel Trail. If you enjoyed this adventure and want to go Behind the Lens with me each week on my adventures, please consider signing up to receive future issues via email.

Tom Cross | Behind the Lens: “Life on the Edge”