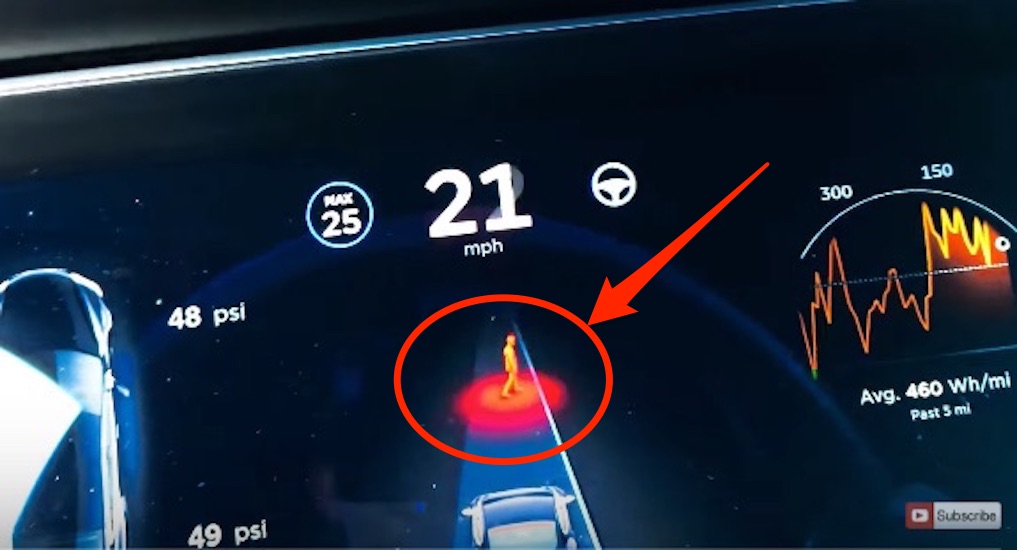 Who knew, Tesla Autopilot has a human collision avoidance system

Tesla released arguably one of the biggest over-the-air software updates in its company history when it introduced Version 8.0 with updated Autopilot in September. Not to be confused with the more recent announcement that new Model S and Model X vehicles are equipped with next generation “hardware 2” capable of Full Self-Driving, Autopilot under Version 8.0 leveraged two-year-old hardware to issue enhancements in drivability and safety through advancements in radar signal processing.

By placing more emphasis on input from the vehicle’s forward-facing radar, Tesla Autopilot was able to detect vehicle activity from two cars ahead and better react to sudden emergency braking events. A recent test using a Model X while trailing two vehicles – the furthest vehicle would simulate an emergency braking situation – demonstrated that Autopilot was able to automatically react to activity beyond what its human driver could see.

But how does v8.0 Autopilot fare against activity from a non-vehicle – let’s say, a human obstacle? Previous tests put together by Tesla owner and YouTuber KmanAuto attempted to see just that. Using a very trusting friend, Kman was able to demonstrate Autopilot’s lack of ability to account for pedestrians when it comes to emergency braking under version 7.0.

Back at it again, and with the same friend Mike Anthony, the duo staged seven separate tests to see how the latest Version 8.0 Autopilot, using radar-based technology supplemented by the front-facing camera, was able to handle situations involving a human obstacle.

Before we jump into the results of the various tests, we’d like to note that Teslarati in no way endorses or recommends this type of stunt, or any activity of similar nature.

We’ve provided the full video here with outcome of the results summarized below. Be sure to also check out the video from Mike’s perspective.

Description: Vehicle was able to detect Mike and gradually come to a complete stop on its own with no driver input. Display did not show an object. No human collision warning appeared.

Description: Vehicle was able to detect Mike walking into the car’s path of travel and bring itself to a complete stop. As Mike walked backwards and away from the vehicle, Autopilot Traffic Aware Cruise Control (TACC) was able to keep its distance to Mike and proceed forward as Mike inched backwards.

Test 3 – Tesla @ 20 mph vs. Human walking from side of road in front of car and then off the road again

Description: Vehicle was able to detect Mike walking into the car’s path of travel and bring itself to a complete stop. As Mike walked off to the side of the road, TACC resumed.

Test 5 – Tesla @ 30 mph vs. Human jogging across all lanes in front of vehicle

Description: This is the first sighting of a human collision warning indicator. Vehicle detects Mike and attempts to hard brake. “In the interest of safety I helped [brake] it, the car gave me a collision alert and it also applied the brakes.”, says Kman. 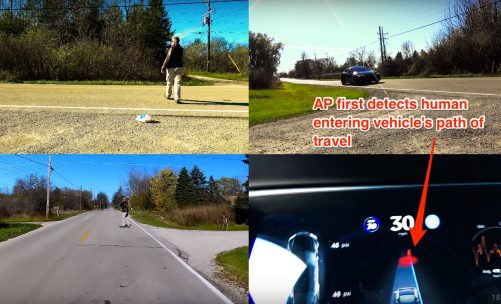 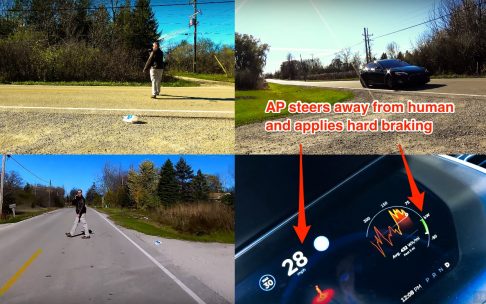 Kman indicates that the vehicle likely would not have stopped in time to prevent hitting Mike but it would have severely lessened the force of impact and possibly lessened the severity of  human injury.

Description: Vehicle was able to detect Mike walking into the car’s path of travel and bring itself to a sudden stop and avoid impact.

Description: Vehicle was able to detect Mike standing before the car and bring itself to a quick stop though no visual warning was seen on the display. It would appear the human collision warning only appears with objects that are non-stationary and enter the vehicle’s path of travel.

The test demonstrates Tesla’s remarkable ability to continuously improve upon its Autopilot suite of features through changes to its set of algorithms driven largely by data collected through the company’s fleet learning program. The test is also significant in that Tesla was able to dramatically improve the safety on its vehicles – now capable of performing emergency braking events when a human is detected – purely over-the-air and with no hardware improvements whatsoever.

With Autopilot 2.0 consisting of seven more cameras and enhanced long range sonar sensors fed from billions of miles worth of driving data, it’s not a question of if Tesla can reach full Level 5 autonomy, but one of when.

Who knew, Tesla Autopilot has a human collision avoidance system