Cohost to the TransMissions podcast and fan-fiction writer for Transformers: REANIMATED, the Washington-based Dad, has made a living by sharing his passion-fueled knowledge of the popular American animated robot television series from the 1980s.

“I’m an old school G1 Transformers fan. (G1 is how a person refers to the original Transformers toys, cartoon, animated movie, and comic books of the 80s.)” Yoshi tells me when we first connected.

Like many of us, the passion sparked in his younger years. As a kid, Yoshi spent most of his time collecting action figures, VHS Tapes, posters, comic books, and anything that would fit within his maturing and fantastical world of Autobots and Decepticons, including his Optimus Prime cookie jar.

Yoshi’s fandom for G1 Transformers, and later Tesla, would manifest itself into something much more profound over time.

In the months following CEO Elon Musk’s debut of the dystopian Tesla Cybertruck, Yoshi reached out to famed comic artist Casey Coller and asked if he would be able to bring the Cybertruck to life as a first-generation Autobot. Afterall, Coller is arguably best known as the illustrator for the official TRANSFORMERS series and can seemingly marry any concept to a G1 Transformer.

Coller agreed, and ‘Shatter’ was born.

The name Shatter, a play on Tesla Cybertruck’s “armored glass” demonstration, is like all transformers and has an internal repairing system, according to Yoshi. “He has an Electro Shock Cannon on his right shoulder used to immobilize and bring down Deceptions.”

And like all Autobots, its name defines its character. Shatter “wears its name with honor and, like Tesla, can learn from mistakes,” Yoshi tells me.

To learn more about the process of commissioning a Comic Artist to create a personalized comic book on an official blank, check out my past interview with Yoshi.

Below are Yoshi’s TRANSFORMERS comic series that found inspiration from a Tesla Roadster, Model S, Model X, Cybertruck, and even the Tesla Semi. 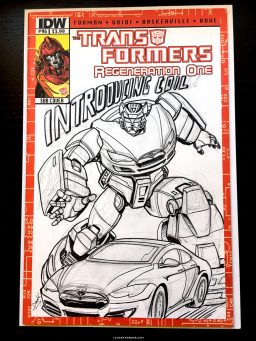 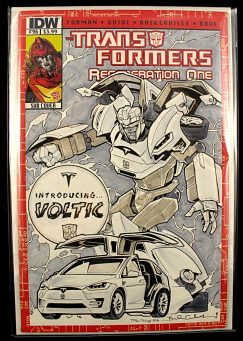 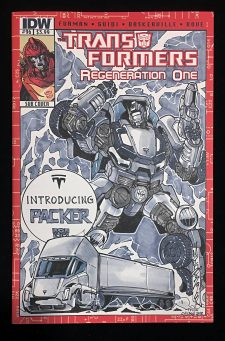 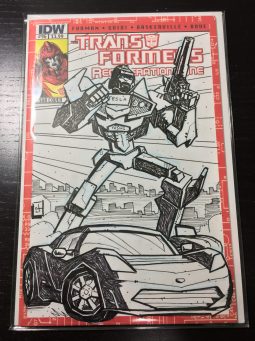