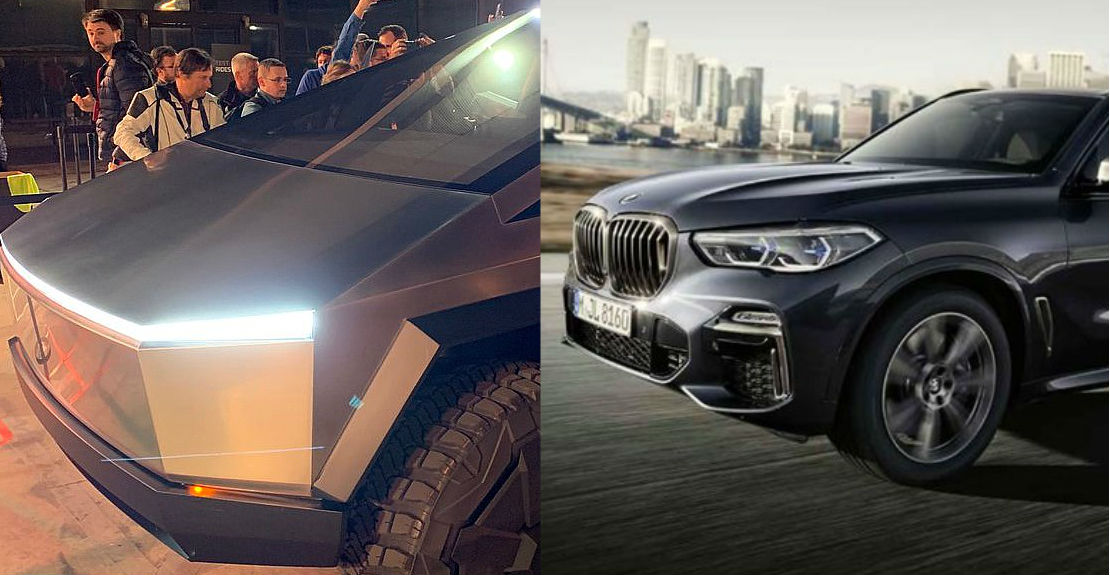 The market may be warming up to the Tesla Cybertruck has shown in the vehicle’s 200k reservations and its spreading support among social media influencers and athletes, but some rival carmakers do not seem to be as friendly to the polarizing vehicle. Among these are BMW and Fisker, both of which have seemingly thrown some shade on the Tesla Cybertruck, particularly with its durability and its angular design.

Following the Cybertruck’s unveiling, which was marred by an otherwise unfortunate incident surrounding the vehicle’s Armor Glass demo, German automaker BMW took to Twitter to promote its BMW X5 Protection VR6, an armored version of its popular SUV that is as tough as it gets. Referencing Tesla’s demo, BMW noted that its X5 Protection VR6 offers splinter protection “in case it gets hit by a metal ball,” an apparent reference to the Cybertruck’s unveiling event.

BMW’s comment is a bit interesting considering the price disparity between the X5 Protection VR6 and the Cybertruck. Starting at $39,990, the Cybertruck is priced far below BMW’s SUV, which has a base MSRP of $58,900 before options. And that’s just the regular X5 as well. Special variants such as the BMW X5 Protection VR6, which are designed to fully protect passengers, are far more expensive.

Yet it wasn’t just BMW which was all-too-willing to throw shade at Telsa for its Cybertruck. The all-electric pickup is unforgivingly angular and brutalist, and it looks almost like the antithesis of Tesla’s previous cars like the sleek Model S or the futuristic Model X. The Cybertruck’s angular frame then became an easy target for Fisker Inc. Chairman and noted automotive designer Henrik Fisker, who took to Twitter to seemingly poke fun at Elon Musk’s pickup truck, particularly its exoskeleton, by posting an image of a moving box with four wheels.

Fisker’s rather boxy comments following the Cybertruck’s reveal are quite interesting, considering that Henrik Fisker was actually once connected to Tesla. Prior to the founding of Fisker Automotive, Musk had shown the noted auto designer Tesla’s idea for the WhiteStar sedan (a vehicle that would become the Model S), but the designs Fisker ended up submitting to the electric car maker were all substandard. When confronted by Tesla, Fisker would reportedly blame the physical constraints that Musk and the company had placed on the car. Fisker would later establish Fisker Automotive with the Karma, a well-designed sedan, at the forefront.

Fortunately for Tesla then, Musk was able to hire then-Mazda designer Franz von Holzhausen to take over the WhiteStar sedan’s design that Fisker could not accomplish. The result of this was the original Model S, which has largely remained unchanged in the seven years it has been on the market. The Model S was a resounding success, earning MotorTrend‘s Ultimate Car of the Year award earlier this year. Overall, it is quite ironic to see Henrik Fisker poke fun at Tesla for its Cybertruck design, seeing as he was unable to design a sedan for the company back when it was still starting out.