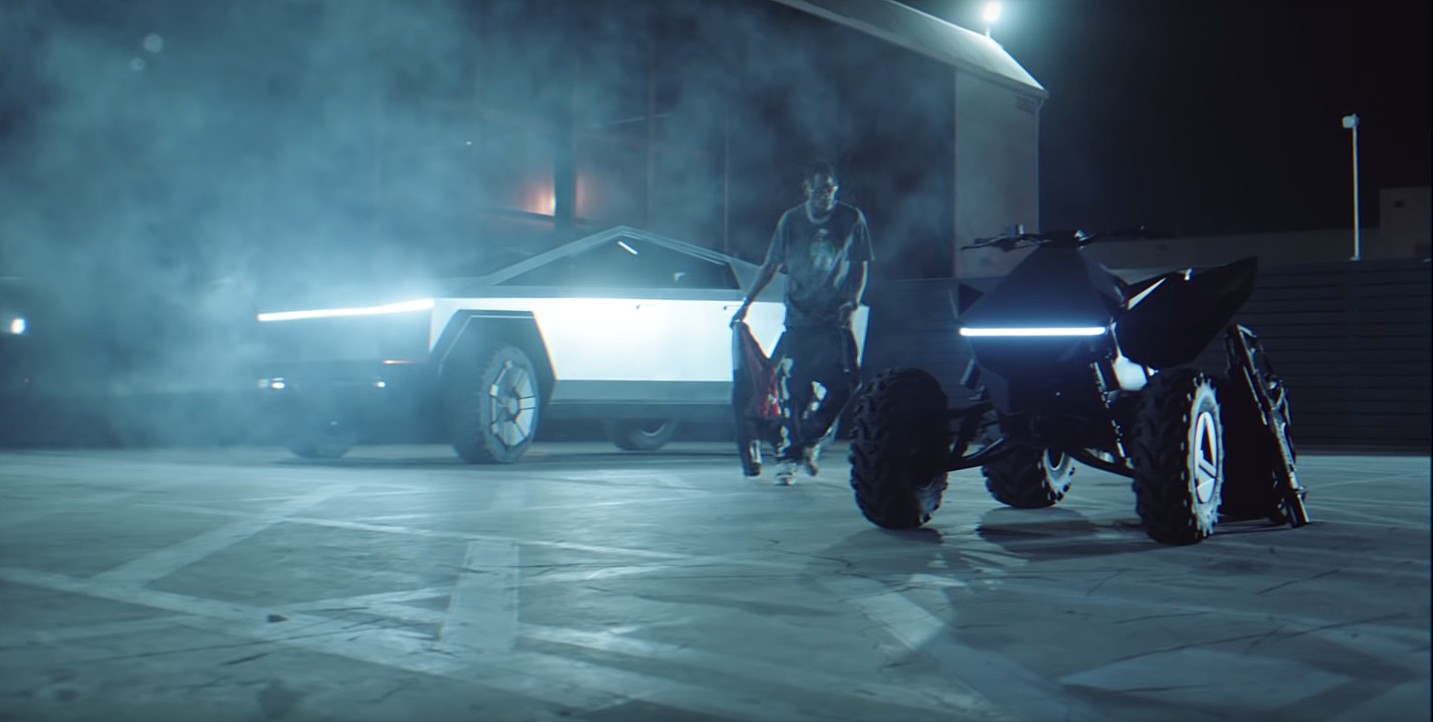 A few of Elon Musk’s most notable creations, including the newly released Cybertruck, “Cyberquad” ATV, and Boring Co. “Not-a-Flamethrower” managed to make it into a new music video from noted rapper Travis Scott.

Tesla’s recently unveiled Cybertruck and its matching ATV were included in Scott’s video, which has gained over 1.1 million views in less than 24 hours. Scott’s most recent project didn’t just include Tesla’s latest creations, either, as the track also included a group named “JACKBOYS,” featuring a number of notable names in the entertainment industry.

The song in the video is titled “GANG GANG” and features artists like Sheck Wes, Don Toliver, and Luxury Tax. Despite all of these names, the stars of the show were arguably the all-electric Tesla Cybertruck and Cyberquad. Scott, recognized by his alias “Huncho Jack” in the video, can be seen riding around in the ATV in various scenes. The Cybertruck and Cyberquad’s scenes in the music video seemed to have been shot at Tesla’s Design Center in Hawthorne, CA as well.

Known for his relationship with pop-culture figure Kylie Jenner, Travis Scott’s 2018 album “Astroworld” won the 2019 BET Hip Hop’s Best Album of the Year award and received nominations for the 2019 Grammy Awards “Best Rap Album” and the 2019 Billboard Music Awards Top Album. The album was streamed 349.43 million times in its first week, making it the fifth-largest streaming album in one week.

Scott’s most recent album has catapulted his success into extraordinary levels. It is unknown how the artist gained access to the Cybertruck or the elusive ATV, but it is likely his increased popularity has gained credibility with some of the world’s most influential figures. This includes Tesla CEO Elon Musk. In fact, Musk was spotted with some of the biggest names in celebrity culture at the annual Kardashian Christmas Party in late December. Musk was seen with girlfriend Grimes, along with Kim Kardashian-West and husband Kanye West and Travis Scott.

The Cybertruck has three different variants and starts at $39,900 for its Single-Motor trim, $49,900 for the Dual-Motor, and $69,900 for the Tri-Motor. The truck has become one of the most talked-about vehicles of the year, especially following recognition from names like Min-Liang Tan of the Razer gaming hardware company and UFC Superstar Conor McGregor. The truck’s interesting and unique build continues to defy stereotypes, becoming one of the most popular topics of the year as a result.

You can watch the GANG GANG music video from JACKBOYS that features the Cybertruck, ATV, and the Not-a-Flamethrower below.