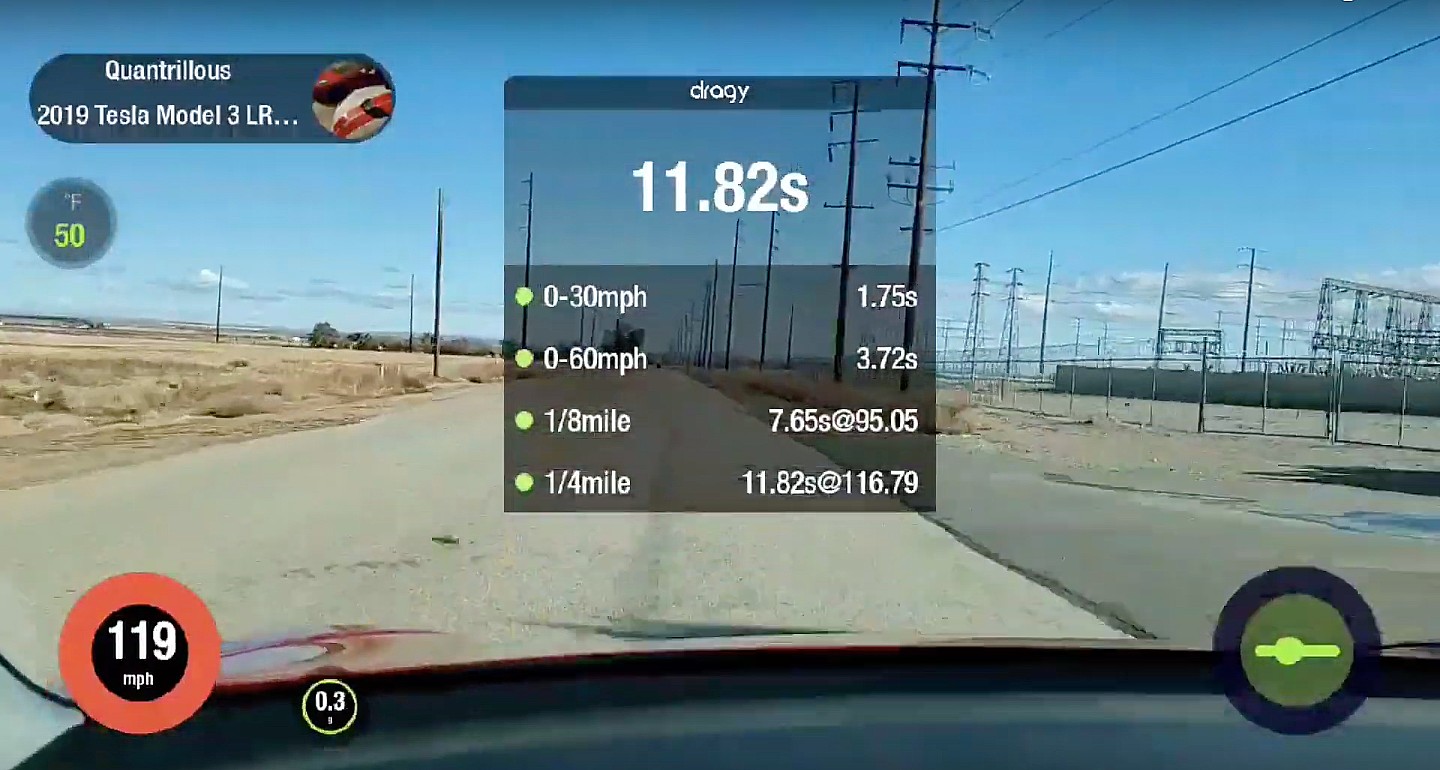 Tesla Model 3 does 0-60 mph in 3.48 seconds after Acceleration Boost upgrade

A Tesla Model 3 Dual Motor AWD owner recently shared his vehicle’s improved acceleration after it was boosted with the company’s paid Acceleration Boost upgrade. The improvements from the update were quite incredible, at one point enabling the mid-tier Model 3 to hit 60 mph in just 3.48 seconds.

YouTuber and Tesla enthusiast Quantrillous Montgomery purchased the $2,000 Acceleration Boost package for his Model 3 last week. According to Tesla, the paid boost allowed the Model 3 Dual Motor AWD to reduce its 0-60 mph time from 4.4 seconds to 3.9 seconds. If the Tesla owner’s recent tests are any indication, it appears that the Acceleration Boost may have made the Model 3 Dual Motor AWD even faster than expected.

Quantrillous used a Dragy device to measure the stats of his upgraded Model 3. In his first run, the Draggy recorded a 0-60 MPH time of 3.72 seconds, much faster than the anticipated 3.9 seconds Tesla claimed the boost would provide. The quarter-mile time was recorded at 11.82 seconds. Following runs were equally impressive, particularly a sprint where the vehicle hit the 60 mph mark in 3.48 seconds (with a 1-foot rollout). That’s a bit faster than the Model 3 Performance’s initial 0-60 mph time.

Evidently, the Performance Boost has given owners of the Model 3 Dual Motor AWD a noticeable improvement in speed and acceleration. This is quite impressive considering that the update seemed to have been significant enough that some vehicles are actually performing better than Tesla’s estimates. A half-second improvement in 0-60 mph times is no joke, after all, and to have a boost just offered as a paid OTA update is very disruptive.

Half-second 0-60 mph improvements that are downloaded over-the-air are pretty much unheard of in the automotive industry. Traditional vehicles need engine tuning, transmission modifications, aftermarket exhausts, or some other form of physical upgrade that will end up costing thousands of dollars in parts to achieve the same improvements. Not to mention, it also takes a longer amount of time to upgrade an ICE car to get a half-second reduction in 0-60 mph times.

Tesla’s paid Acceleration Boost opens up a new frontier for Tesla. The electric car maker could utilize such offers to boost its revenue, especially since rolling out such features require very little cost on Tesla’s part. It could, in a way, even be the start of an era where Tesla becomes a company that follows a software-as-a-service model.

You can watch Quantrillous Montgomery’s video of his Model 3 Long Range All-Wheel Drive vehicle performing after this purchase of the Acceleration Boost upgrade below.

Tesla Model 3 does 0-60 mph in 3.48 seconds after Acceleration Boost upgrade