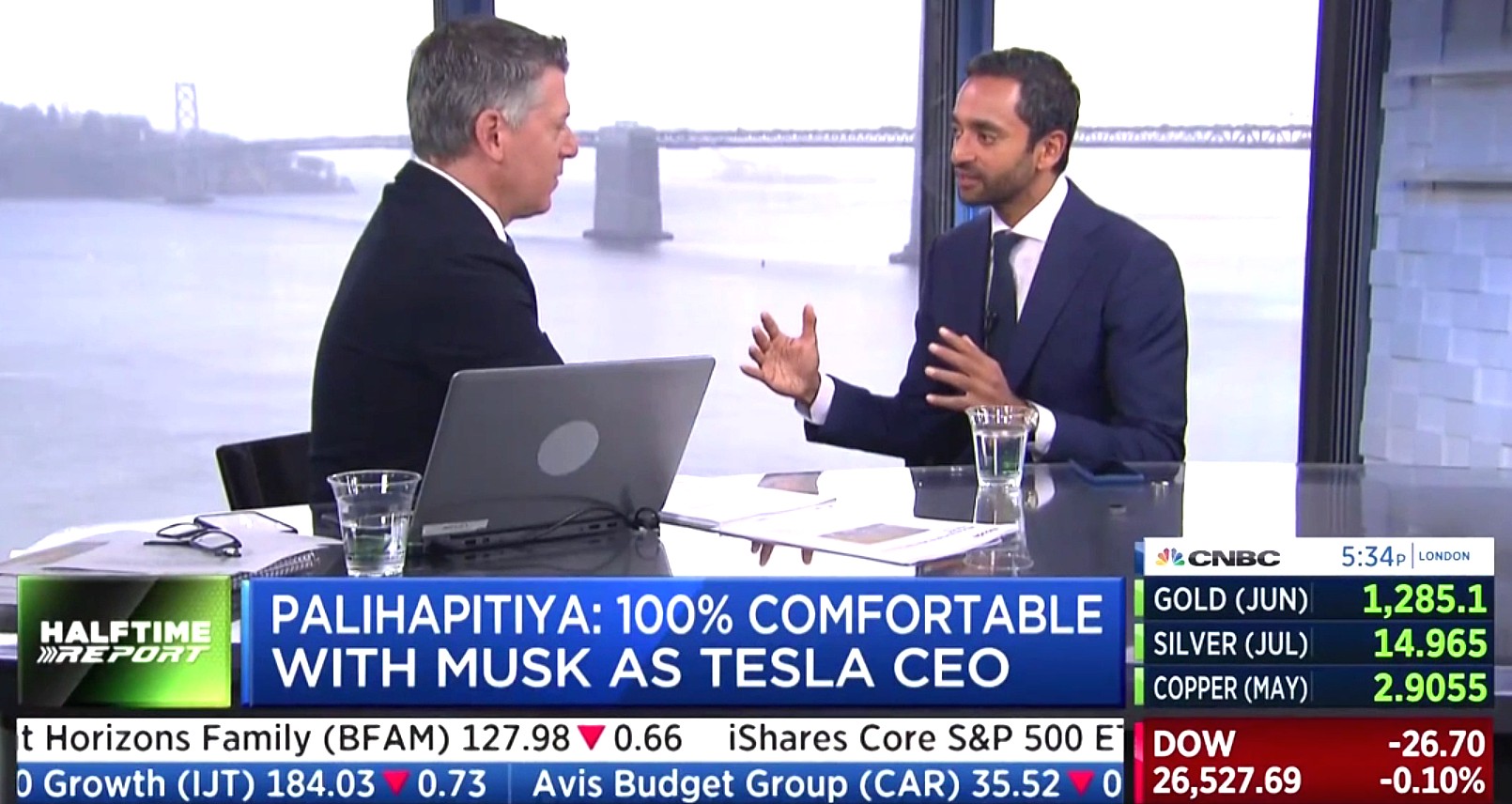 There are a lot of reasons why Tesla (NASDAQ:TSLA) is fighting an uphill battle. The company is changing the status quo in both the auto industry and in the emerging autonomous driving market. Its CEO, Elon Musk, continues to be a polarizing figure for many. These, together with the mass numbers of short-sellers betting on the company’s failure, makes Tesla a dramatic stock in the market; and this became evident in the aftermath of the company’s first quarter financial results and earnings call.

Venture capitalist Chamath Palihapitiya, an early investor in Facebook who is estimated to be worth around $1.2 billion today, believes that many are missing the whole point about Tesla. In a segment with CNBC Halftime Report host Scott Wapner, Palihapitiya explained why he fully supports Tesla, its vehicles like the Model 3, and its CEO, Elon Musk. A video of the venture capitalist’s segment has been cut from CNBC’s uploads of the interview, though copies of the footage have been saved by some members of the Tesla community since it aired (credit to @TradrFloridaFIL for providing the video and transcription of the interview).

Palihapitiya starts by arguing that Elon Musk has already completed endeavors that will benefit humanity for a long time to come, citing the reusable rockets of SpaceX, which have brought the costs of spaceflight down significantly. The venture capitalist notes that Tesla is now maturing under all the demand for its vehicles, particularly the Model 3, which has brought the company closer than ever to the mass market. While Palihapitiya admits that Tesla is not best-suited for investors who are particular with quarter-over-quarter precision, he argues that the company has nonetheless impressed on the long term.

The venture capitalist also expressed his criticism of Tesla skeptics, mainly hedge funds, who are proficient at under-hyping and “sniping” the electric car maker. This is something that has weighed down the company over the past quarters, and has caused CEO Elon Musk to respond personally to critics online. “What it’s controlled by are a bunch of vulture-like venture and hedge funds, mostly hedge funds who like to prey on that company. If you look at for example the Twitter traffic or if you look at the forum traffic around Tesla the amount of hyping or under-hyping the amount of sniping is enormous. All of that signals to me that it is a market that is out of the control of the founders and the executives and firmly in the hands of financial manipulators,” Palihapitiya said.

While Palihapitiya admits that Elon Musk has a problem with his overly-aggressive timeframes, the venture capitalist candidly noted that the world might be better off if Elon Musk were just allowed to “do his job.” “If you take a five-year step back and say what is he promised in 2014 to what is he doing in 2019 you’d be ecstatic. Similarly, if you take a step back and say from 2019 to 2024 let the man do his job, will we be better or worse off as a planet, as a species, as humanity, as consumers? Will we be better off?” he said.

A particular point of criticism for Elon Musk lies in his behavior online. Musk’s Twitter account could be considered as one of Tesla’s greatest assets or liabilities, in the way that its contents have triggered both positive and negative swings for TSLA stock. Tesla critics currently view Musk’s Twitter antics as a critical part of their bear thesis, particularly since his actions are allegedly not reflective of a CEO that is professional and in control. This was brought up by the CNBC host during the venture capitalist’s interview, and Palihapitiya was quick to issue a rebuttal. According to the billionaire, people that are caught up in concerns about Musk’s Twitter are missing the whole point, even considering the CEO’s now-infamous “funding secured” tweet.

“Okay, maybe he stepped out of bounds. My point is you’re getting caught up in the window dressing. I’m focusing on the main course. The main course is on the table. The choice for you as a buyer or a seller of that stock is, do you want to eat it? If you get caught up in all of the stuff around the edges, maybe he may mistweet from time to time. My point is, who cares? Your job as a smart investor is to separate the facts and the news from the fiction and the noise. And all of that stuff doesn’t matter. It does not change the fact that tens of thousands of consumers are buying that car faster than they can get their hands on it. It doesn’t change that the minute you sit inside that car, your definition of what is expected is altered forever and you wonder why every other car around you that you ever step in that you may buy doesn’t have the same things that that car offers. So at the end of the day, whether you like his style or not, his substance is irrefutable,” he said.

In response to the CNBC host’s question about the upcoming competition from veteran auto, the venture capitalist notes that at this point, it is evident that Tesla will be the “clear winner” in the electric car industry. This comment is not just blind support for Tesla, as even premium electric cars being produced by legacy auto today still fall short of the specs and capabilities of the company’s vehicles. Vehicles like the Audi e-tron, for example, feature more luxurious interior finishes than a Tesla Model 3, but when it comes to efficiency and software, the vehicles are years behind. Palihapitiya argues that even if Tesla reaches a point where it will need to be bailed out, larger companies like Apple or Google will likely acquire the electric car maker.

“You’re right because I remember all the Zune media players I bought after Apple released the iPod. I also remember the enormous number of amazing smartphones I bought when the iPhone was like… It’s not what people do. You know it tends to be the case that when you redefine expectations and you have a category leader, and you have an indelible brand and a mark that people recognize, the easiest decision. Let me be a little pejorative; the lazy decision is to pick the winner and go with it. And in this case there is a clear winner in electrification, it is done. That die has been cast. And so now the question is can he build the infrastructure to deliver the demand? And if given time and if given patience I believe he will and I vote with my money that he can do that.

“And everybody that bets against him can do that as well but at what stake really, because it’s not as if there’s no downside protection for the stock. The people who short this company are so short-sighted because the number of companies that would come out of the woodwork… You don’t think that Apple with 200 billion dollars of cash backstops this company and has a chance to enter a trillion dollar market overnight by buying that business if it gets imperiled in any way? Google which already tried to buy it wouldn’t try to buy it again? So what are we betting against? We’re betting against the cleaner earth because we don’t like that? We like to suck in the carbon monoxide and the fumes from all these cars? We’re betting against beautiful flat screens, beautiful ways in which to manage your experience inside the car because we don’t like that?” he said.

Ultimately, Palihapitiya argues that the bets against Tesla are usually bets against Elon Musk’s style. When the CNBC host brought up noted short-seller Jim Chanos and his stance against the electric car maker, the venture capitalist did not mince his words. “Jim Chanos makes money once a decade. And while the market rips up the guy just bleeds money, and he’s never on CNBC and every time something works he’s there for five minutes. Great for Jim Chanos, fantastic as a hedge in a portfolio where you have 1% in a short fund but the reality is being long equities makes sense. Being long innovation makes sense. Betting against entrepreneurs that are changing the world has never been a profitable endeavor. Why start now?” he said, adding that he will be happy to post his returns against Chanos’ fund any time when challenged once more by the CNBC host.

Watch Chamath Palihapitiya’s segment on CNBC’s Halftime Report in the video below.