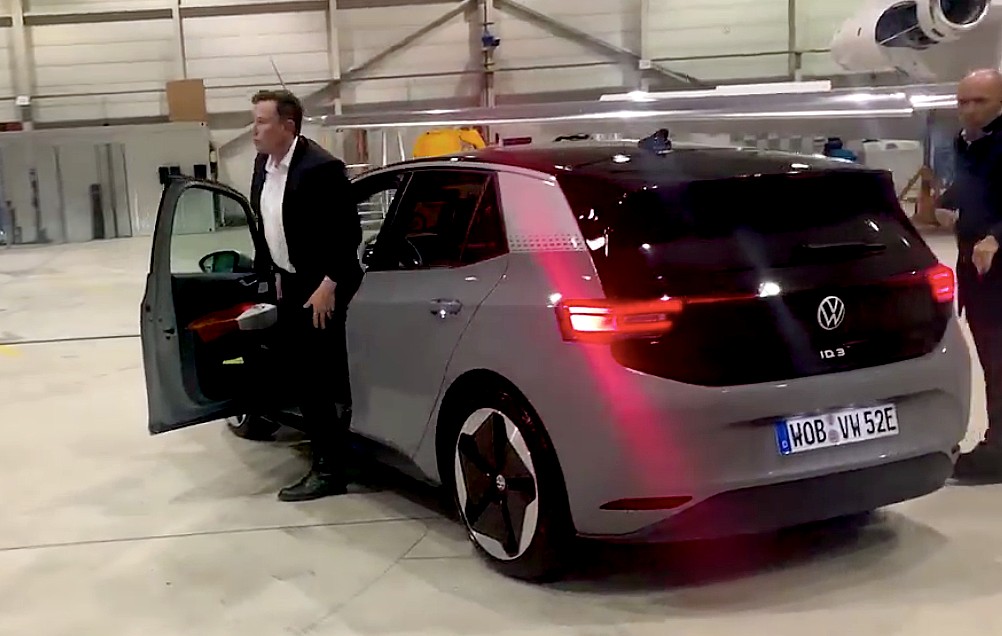 One of the more surprising elements in Elon Musk’s recent visit to Germany was his meeting with Volkswagen Group executive Herbert Diess, who hosted the Tesla CEO at the Braunschweig Airport. During their two-hour meeting, the two electric car advocates took a drive in the ID.3, Volkswagen’s first EV from its MEB platform. The news came as a pleasant surprise to the electric car community, many of whom were interested to see Elon Musk’s insights on the ID.3, a car that could rise alongside the Model 3 in the mainstream vehicle market.

Fortunately, a video of Elon Musk’s Volkswagen ID.3 test drive was recently shared by Herbert Diess in his LinkedIn profile. The short video, which was also posted by the Volkswagen Group’s official Twitter account, featured Musk and Diess engaging in friendly conversation while the former was test driving the ID.3. As it turned out, Musk seemed to be pretty optimistic about the vehicle, at one point stating that the ID.3’s steering was “pretty good” for a non-sporty electric car.

Quite amusingly, the recently-shared video included segments of Herbert Diess setting Musk’s expectations about the ID.3 by reminding the Tesla CEO that the hatchback was a mainstream car and “not a race machine.” Laughing in response, Musk lightly stated that he “just wanted to see what the acceleration is like.” Musk could later be seen seemingly flooring the ID.3 while jokingly asking Diess “What’s the worst that could happen?”

In the few segments of the test drive featured in the clip, it could be seen that Musk inquired about several aspects of the ID.3, such as its battery pack and its driver-assist features. Diess, for his part, stated that the ID.3 is equipped with German state-of-the-art lane-keeping and emergency assist systems. The clip ended with Elon Musk and Herbert Diess getting out of the ID.3, with the Tesla CEO seemingly looking over some details of the mainstream EV. The ID.4, an all-electric crossover, could be seen nearby as well.

Diess later commented in his post with some new details about Musk’s Volkswagen ID.3 test drive. According to the Volkswagen Group executive, Musk was a bit critical of the ID.3’s torque at higher speeds. Diess also told Musk that for a true sports car experience, the Tesla CEO should try out the Porsche Taycan, an all-electric high-performance EV that Musk has openly supported in the past.

“Thanks for the visit, Elon! Hope you like the video. It was great driving the ID.3 with you! You were just quite critical with the available torque at higher speed. I told you: ‘Yes, we are on the runway – but no need for takeoff – it’s not a sports car.’ For this, you should try our Porsche Taycan. Looking forward to our next meeting!” Diess wrote.

Elon Musk and Herbert Diess have openly supported each other’s endeavors in the past, with the Tesla CEO recently stating during an interview at Gigafactory Berlin that companies like Volkswagen are putting in a lot of real work to get EVs to the mainstream market. While responding to a rather critical report on the Volkswagen Group executive last year, Musk noted on Twitter that “Herbert Diess is doing more than any big carmaker to go electric. The good of the world should come first. For what it’s worth, he has my support.”

Diess, for his part, has also openly defended Musk. Last October alone, reporters suggested that while the Model 3 was successful, they still view Tesla as a “niche” carmaker capable of making low-volume cars but out of its league in the mass market segment. Diess promptly came to Tesla’s defense, stating that the American carmaker is not a “niche” company in any way. “Tesla is not niche. The Model 3 is a large-series model and they are one of the biggest manufacturers of electric-car batteries. We have a lot of respect for Tesla. It’s a competitor we take very seriously,” the Volkswagen Group executive said.