This year could start the beginning of the end for the internal combustion engine. Heck, The Economist gave the internal combustion engine an obituary this year in a recent cover story. And, according to Peter Holley at the Washington Post, “when future auto historians look back, they may pinpoint 2017 as the year electric vehicles went from a promising progressive fad to an industry-wide inevitability.”

Holley points out a number of signposts surfacing this year that pose a threat to the diesel and gas-powered automobile. The internal combustion engine (ICE) may be on… ummm, thin ice. So, as we look at the events unfolding this year, what indictors are contributing to this tectonic shift in the auto sector?

1. Tesla Model 3 ushers in the age of electric vehicles

Of course at the top of our list is the “the debut of Tesla’s Model 3” this year. Holley writes, “The company’s first mass-market vehicle has ushered in an era of excitement about EVs because of the car’s slick design and starting price of around $35,000.” But don’t let that lower price point fool you, Tesla is poised to achieve healthy margins for the Model 3 too.

China has proved a massive market opportunity for Tesla. And CEO Elon Musk may soon be announcing a Tesla factory in Shanghai. China’s also the world leader in electric vehicle sales by a wide margin. It’s reported that, “in addition to setting aggressive production quotas for EVs, China plans to scrap internal combustion engines entirely as soon as 2030. By taking a lead role in the shift to plug-ins, the world’s largest auto market is forcing the rest of the international community to follow in its footsteps.” And, other countries are following China’s lead.

Gas stations have been taking some unlikely cues from Tesla. And, “some experts believe electric cars have sounded the death knell of the American gas station.” John Abbott, Shell Oil’s business director admits, “We’re looking at having battery charging facilities.” This past week Shell signed an agreement to buy the electric vehicle charging company, NewMotion, which, “operates more than 30,000 private electric charge points for homes and businesses in the Netherlands, Germany, France and the U.K.”

4. Auto mechanics have less work to do

Electric cars require far less maintenance than gas-powered cars. “One of the primary reasons that auto owners visit a mechanic is for an oil change, which raises a question: What happens when vehicles no longer rely on oil? It’s not that electric vehicles won’t require maintenance (they still have brakes, tires and windshield wipers, after all), but their engines are far simpler, experts say.” Tony Seba, a clean energy expert, notes that electric vehicles, “have 20 moving parts, as opposed to 2,000 in the internal combustion engine… [and] are far cheaper to maintain.”

Jessica Caldwell, analyst at Edmunds admits, “You really do feel like this electrification thing is suddenly very real… There’s a momentum we haven’t really seen before. It’s coming from other countries around the world and from big automakers, and that’s forcing everyone else to comply.” Although, to be fair, it’s conceivable some of Big Auto’s EV announcements could just be feel-good window dressing for their brands. After all, legacy automakers are using some crafty wordplay hyping electrified cars instead of all-electric cars. 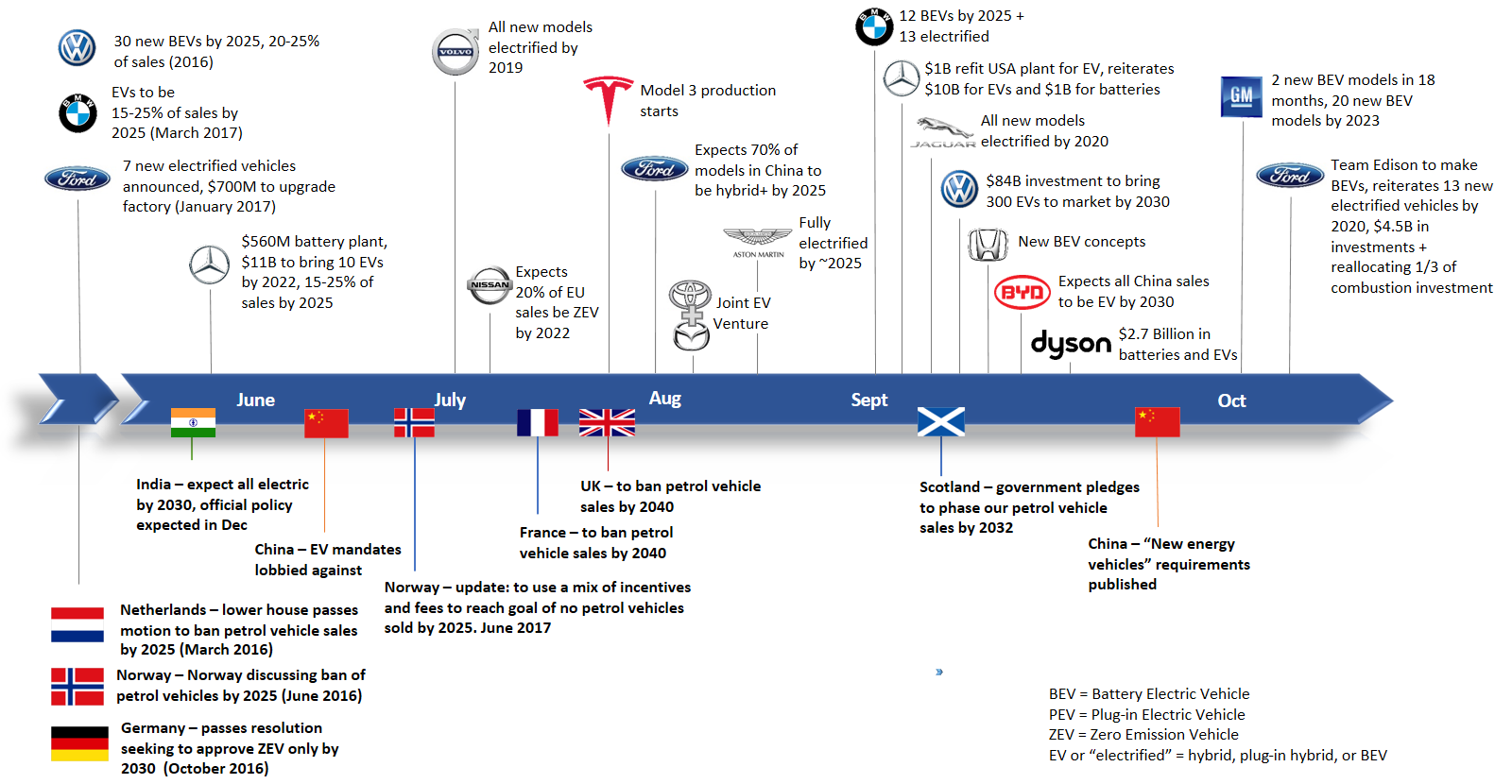 Above: Announcements from automakers (and countries) committing themselves to an electric vehicle future (Image: Teslarati)

With tales of cartels and collusion surrounding Germany’s dirty diesel programs, public perception is starting to shift. And the research is conclusive, electric vehicles are cleaner. Gina Coplon-Newfield, Director of Sierra Club’s Electric Vehicles Initiative explains, “Depending on how electricity is produced in your region, plug-ins are from 30 percent to 80 percent lower in greenhouse gas emissions.” She notes if companies like GM step up with plans to launch EV fleets, reductions in carbon emissions and improvements in air quality could be “hugely beneficial.”