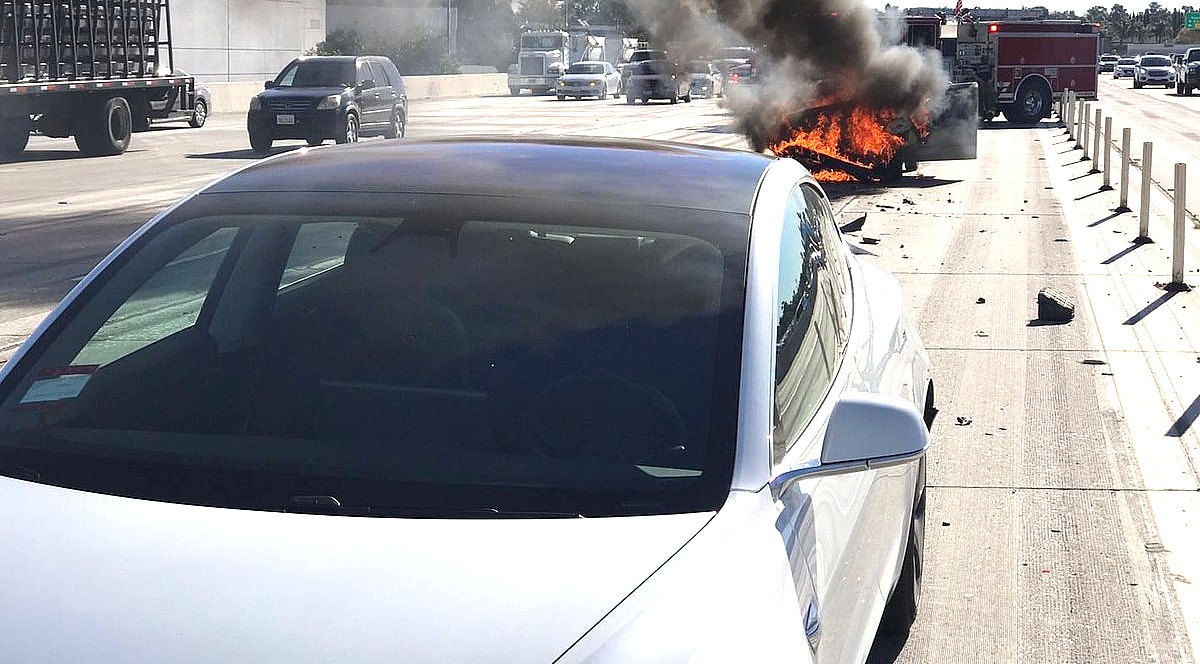 A Tesla Model 3 owner recently shared a harrowing incident he experienced in a Los Angeles freeway late last year. As he was driving his electric car, the Model 3 owner heard the unmistakable sound of screeching brakes behind him. What followed was a violent crash that resulted in the vehicle that crashed into the electric sedan bursting into flame.

Recently relating his experiences recently to Tesla owner-enthusiast Vincent Yu, the Tesla owner noted that the other car, a Nissan Sentra, was traveling at high speed before it smashed into his Model 3. So massive was the impact that the Sentra’s front bumper ended up embedded on the electric car’s rear bumper. Amazingly, the Model 3 driver was able to escape from the accident with only a minor sprain. The electric car also proved remarkably durable, as its chassis and battery were undamaged.

The Nissan Sentra was not so fortunate. Its front end was totaled due to the collision, and it ended up burning in the middle of the highway. The driver of the Sentra survived the accident, though the person was wounded due to the impact.

Since the Model 3 proved to be a tank of a vehicle, the Tesla owner was able to get the car repaired. The entire process lasted around three months, including one month spent waiting for OEM parts. The Model 3 only needed to have its trunk and some components replaced before it was perfect and roadworthy once more.

Apart from highlighting the durability of Tesla’s electric cars during collisions, the recently-related story of the fiery crash involving the Tesla Model 3 highlights the dangers inherent in vehicles equipped with the internal combustion engine. Negative connotations being spread around Tesla’s electric cars suggest that the vehicles are prone to bursting into flame during crashes, but the opposite is true. During an accident, a vehicle that is propelled by controlled explosions is more likely to catch fire than one that is powered by a battery pack.

This is something that was highlighted by National Transport Safety Board (NTSB) Survival Factors investigator Tom Barth, who noted previously that there is “no indication that Teslas are any more prone” to catch fire than any other vehicles on the road. Barth added that when severe crashes happen, any car, regardless of whether it is propelled by electricity or gasoline, has the potential to catch fire.

Tesla’s electric cars are among the safest vehicles currently on the road, with the Model 3 earning a flawless 5-star rating from the National Highway Traffic Safety Administration (NHTSA). Data from the NHTSA also lists the Model 3 as the car with the lowest probability of injury among all the vehicles it has tested, followed by the Model S and X.