Tesla is sending out emails inviting owners to sign up for a special winter-themed event this March. Dubbed as the “Tesla Winter Experience 2019,” the event will allow a number of lucky owners to experience the high-performance capabilities of the company’s vehicles in icy conditions firsthand. The event will be held at Kemi, Finland, and will involve the company’s all-wheel-drive variants of the Model S and Model 3.

As noted in Tesla’s message, owners and guests attending the event will be receiving a number of perks. Apart from enjoying an intense drive over an ice track accompanied by a professional driver, participants will be receiving complimentary travel, accommodation, as well as daily breakfast and lunch. A special dinner held at the Kemi SnowCastle — an iconic spot in Finland considered as the world’s largest snow fort — will also be offered to the event’s attendees. Following is the email Tesla recently sent out today.

“This March, we might bring you and a friend to the frozen sea in Finland.

“Sign up for a chance to experience a unique ice driving event with Model 3 and Model S in Europe. Enjoy Model 3 Track Mode and the unparalleled power and best-in-class acceleration of Model S as you race across a wintery ice track with a trained professional. Winners receive complimentary travel, room and board, and a special dinner at the Kemi SnowCastle.

In the event’s official webpage for North America, Tesla pointed out that the capabilities of Track Mode — the Model 3 Performance’s exclusive setting that allows the electric sedan to endure extended sessions of high-intensity driving — will be showcased in Winter Experience 2019. Tesla also explained some details behind its cars’ performance in icy conditions, stating that its AWD vehicles offer impressive traction thanks to their dual motors that digitally control torque to the front and rear wheels.

Tesla’s page for the event in Europe is headlined by the Model 3’s arrival in the country. The company also mentions an extra perk that was not included in the event’s North American page — a travel satchel from TUMI, one of the electric car maker’s partners. Below is a comparison between Tesla’s webpages for the Winter Experience 2019 for North America and Europe. 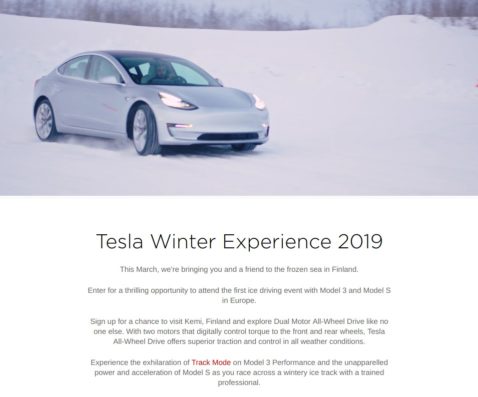 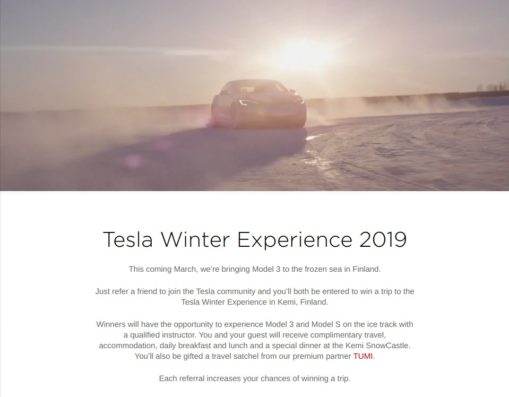 Tesla’s upcoming Winter Experience in Finland appears to be yet another program aimed at cultivating and strengthening the company’s engagement with its loyal customer base, while raising interest for the Model 3 in Europe at the same time. Considering that deliveries of the Model 3 to the region will likely be underway by the time the event is held, the Winter Experience would likely generate more buzz about the electric sedan, particularly among residents of the European region.

Tesla is now in the process of shipping the Model 3 to Europe. Reports indicate that Tesla is planning on shipping 3,000 Model 3 per week for the region, which will be comprised of Long Range and Performance versions of the vehicle. In his recent email to employees, Tesla CEO Elon Musk also noted that the company is attempting to start shipping the Mid Range Model 3 RWD to the international market sometime around May. That is, of course, until Tesla could begin producing the Model 3’s ever-elusive $35,000 Standard Range RWD version.

Watch Tesla’s teasers for the Winter Experience 2019 event in the clips below.