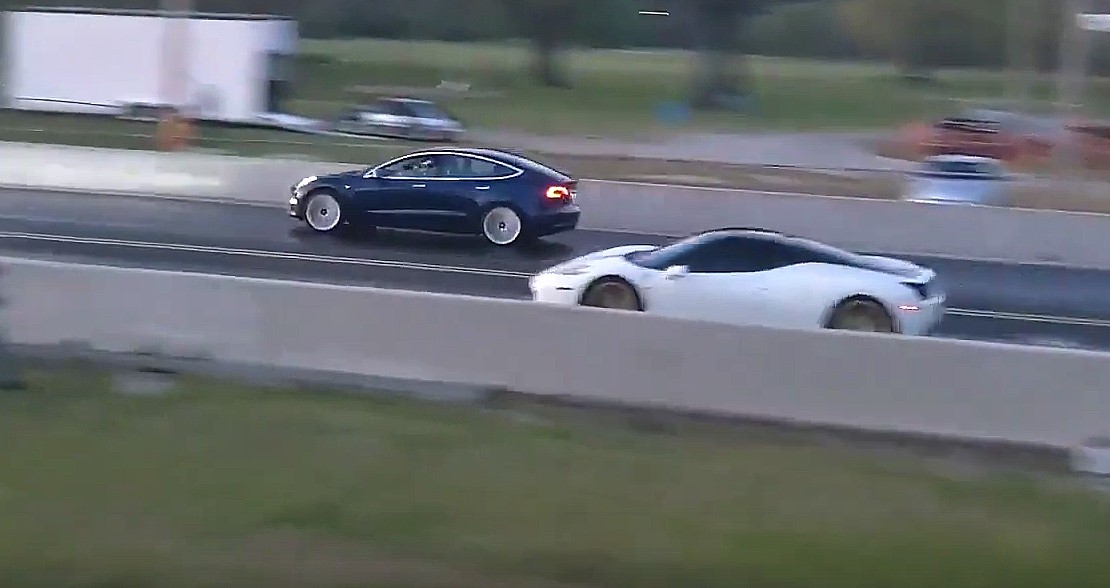 A Tesla Model 3 Performance has shocked a group of drag racing fans by going on a head-to-head battle against a Ferrari 458 in a 1/8-mile drag race. Thanks to an over-the-air power boost and the instant torque of its dual electric motors, the all-electric high-performance sedan from Silicon Valley was able to give the Italian supercar a good fight, plus a lot more.

The Model 3 Performance that battled the supercar has received the over-the-air Peak Power Increase update from Tesla. The update, which was mentioned by Elon Musk during the launch of the $35,000 Standard Model 3 and on Twitter, increases the peak power of a Model 3 by around 5%, which results in a top speed increase of about 10km/h or 7 mph.

It should be noted that even without the Peak Power Increase update, the Model 3 Performance is already a blazingly quick car, with its 0-60 mph time of 3.2 seconds and its Track Mode feature, which allows the vehicle to run multiple laps around a closed circuit without losing power. During a test with veteran race driver Randy Pobst, the Model 3 Performance with Track Mode was able to match the performance of a 2016 Porsche Cayman GT4 around the “Streets” of Willow Springs International Raceway in CA.

Quite fittingly, the Model 3 Performance’s record in Willow Springs matched the track time of one of Motor Trend‘s Best Driver’s Car winners in the past, the 2011 Ferrari 458 Italia. The Ferrari 458 is among the best vehicles that have been created by the Italian supercar maker, with its naturally aspirated V8 engine regarded as one of the best (if not the best) sounding V8 ever produced. Since its launch in 2009, the 458 has been described as the perfect car, and such a statement is not too much of a hyperbole. The only “drawback” that could be considered for the Ferarri 458 is its price, which starts at $239,340 for the base model, as noted by Autoblog. Higher priced variants such as the 458 Speciale are even more expensive.

Even a stunning piece of internal combustion machinery and art such as the Ferarri 458 has its work cut out for it, particularly when it’s faced with a high-performance electric sedan that gets more powerful simply because of a software update. At the beginning of the race between the Model 3 Performance and the Ferarri 458, the host of the event called out the two vehicles, asking “The Tesla, will it shock everybody?”

As soon as the race started, it became evident that the Model 3 was going to do just that. The electric sedan started the race by establishing an early lead over the Italian supercar, and by the time the 458 was able to get its rhythm by shifting its gears, the Model 3 had already completed the race. Jeff Brockway, who uploaded the race on YouTube, noted that the Model 3 Performance ran the 1/8 mile in 7.4 seconds, beating the Ferarri 458, which crossed the 1/8-mile mark in 7.6 seconds. The shocked reaction from the event’s audience and host after the Model 3’s win proved appropriately satisfying.

Watch the Model 3 Performance battle a Ferarri 458 in the video below.