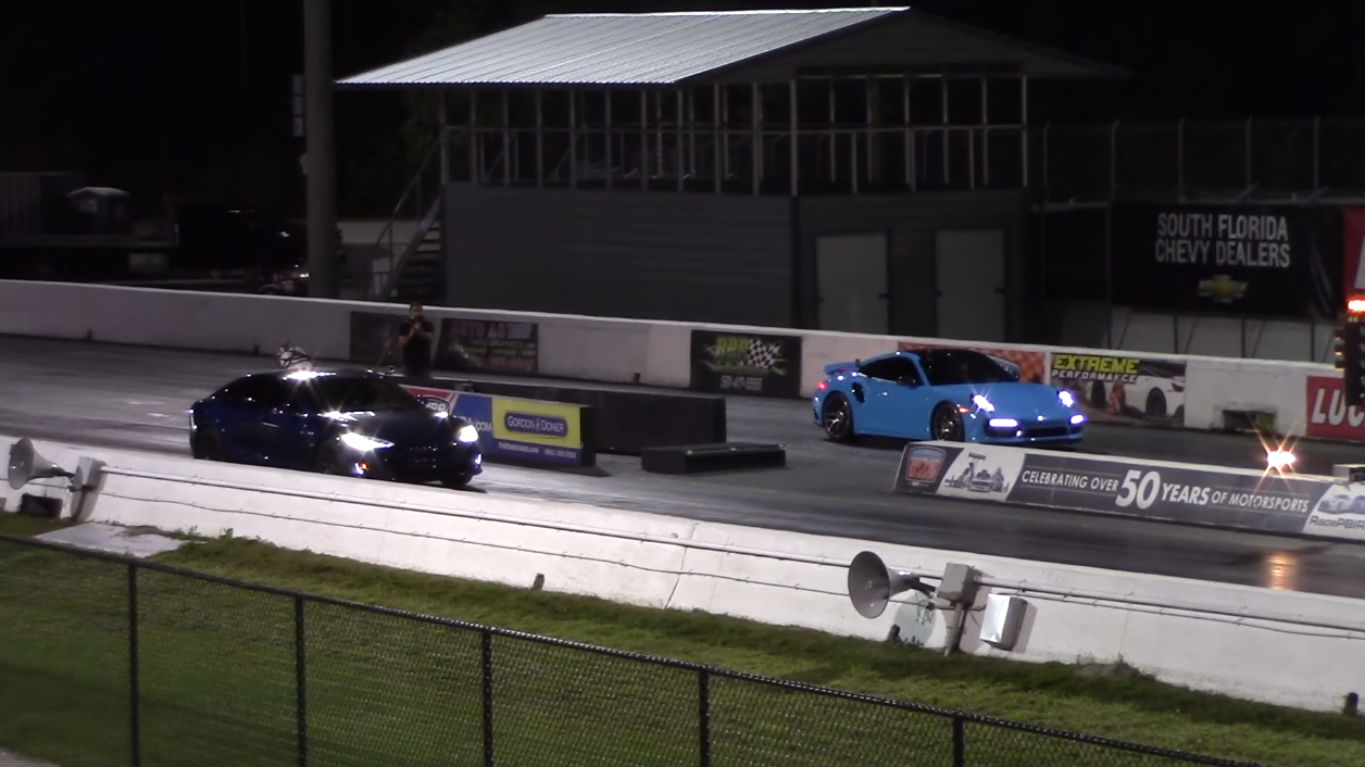 The Porsche 911 Turbo S in DragTimes’ recent video is no ordinary 911 Turbo S, as it is modified with a Full Exhaust- No Cats Champion Tune. This particular modification allows the German-made ICE sports car to improve its horsepower to 675 hp from its stock 580 hp. With this mod, the 911 Turbo S’ 3.8-liter Turbocharged Flat 6 engine could send a Tesla-rivaling 588 hp to its four wheels. The Porsche is also equipped with an all-wheel-drive drivetrain and a 7-speed dual-clutch transmission, allowing it to reach its top speed of 205 mph quickly.

On the other hand, the Tesla Model S P100D that Brooks, the host of DragTimes, was driving, was all stock. Equipped with dual electric motors that are capable of instantly producing 920 ft-lbs of torque off the line, the Model S P100D is no slouch. Just like the modified Porsche 911 Turbo S in DragTimes’ video, the Tesla also produces 588 hp to its four wheels, thanks to its all-wheel-drive drivetrain.

As could be seen in DragTimes’ most recent video, neither the electric family sedan nor the pedigreed ICE sports car gave way to the other. Off the line, the P100D was noticeably quicker, thanks to the instant torque from its twin electric motors. Brooks’ reaction time of 0.019 seconds also helped the electric family sedan get an early lead. As the quarter-mile race neared its end, and as the modified Turbo S shifted to its higher gears, the ICE sports car was able to catch up, beating the Model S P100D to the finish line. It should be noted, however, that the Model S P100D did not use Launch Mode during the race.

A second race was attempted by Brooks, but the modded Porsche 911 Turbo S spun out and was forced to forfeit the run. The YouTuber ended the video with the assurance that a rematch would happen in the future.

As we noted in a previous report, Brooks of DragTimes recently took his Model X P100D in a quarter-mile battle against an Acura NSX. Despite the Acura NSX’s hybrid system featuring a 3.5-liter Turbocharged V6 engine and three electric motors, the far heavier Model X P100D was able to get the win, reaching the quarter-mile marker 0.25 seconds faster than the Japanese-bred supercar.

Brooks’ Model X P100D also set a quarter-mile world record last month, finishing the run in just 11.281 seconds at 118.37 mph. Immediately after that, the heavyweight electric SUV was pitted against one of the fastest ICE SUVs in the market today — the jeep Trackhawk — a monster of a vehicle that features a 707-hp engine based on the legendary Dodge Hellcat. Just like the Acura NSX, however, the Model S P100D walked all over the Jeep Trackhawk.