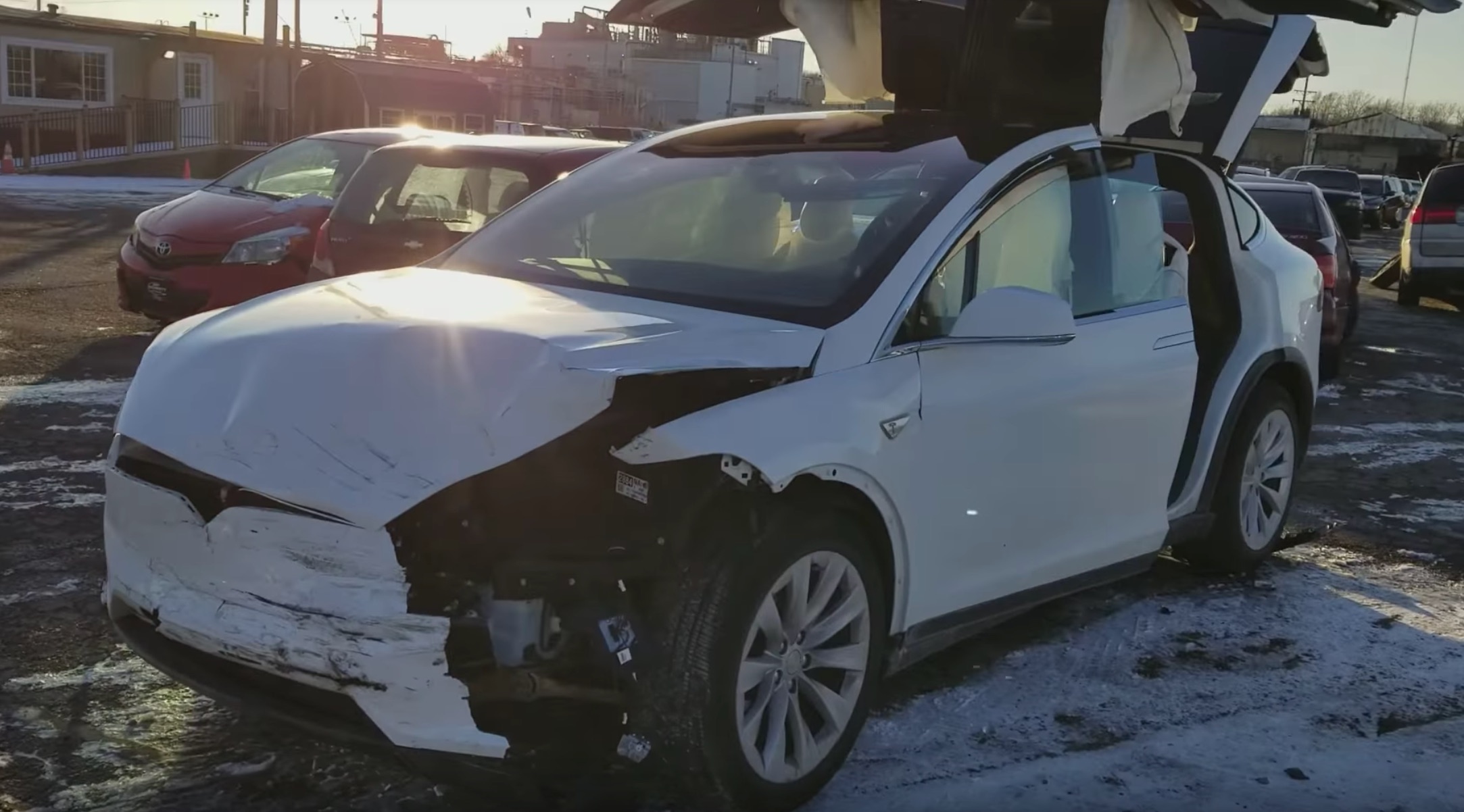 Tesla takes pride in the Model X’s stellar safety ratings from the National Highway Traffic Safety Administration (NHTSA), which awarded a full 5-star crash rating for all categories and subcategories of the electric SUV. These excellent safety scores were put to the test recently, when a Tesla Model X 75D got involved in a serious crash in Dayton, Ohio.

The aftermath of a Model X 75D accident was shared by Jordan Hart, a Tesla enthusiast and owner of YouTube’s Driving The Future channel. According to Hart, a small sedan ran a red light in front of his wife’s Model X 75D, which was traveling at about 55 mph. The accident resulted in a collision that damaged the electric SUV’s front left side.

The impact from the accident completely ripped off the Model X 75D’s left headlight and a large chunk of its bumper, exposing the internals of the vehicle. The hood of the heavyweight SUV was also bent out of shape.

Despite the significant impact, however, the Tesla was able to protect Hart’s wife by cocooning her in the safety of Model X 75D’s twelve airbags. We saw a similar occurrence last year when a Tesla Model X saved the life of an entire family and their pet after it was involved in a horrific traffic accident at an intersection. “I waited 4 years for this one and would wait 4 more if that is what it took to protect my family like this.” said the driver of the Model X at the time.

In a statement to Teslarati, Hart stated that immediately after the collision, his wife was able to drive the Model X 75D to the side of the road. She was also able to exit the vehicle without any issues as well. The electric SUV then sent a message about the accident to Tesla, which immediately reached out to his wife.

Hart further stated that he was able to utilize his smartphone’s Tesla app to navigate directly to his wife and her Model X 75D’s location. He and his spouse were then informed of the nearest shop where the electric SUV could be towed to. The shop also gave Hart and his wife a quote for the Model X 75D’s repairs.

The quote for the Model X 75D’s repairs as a result of the accident was estimated to be $40,000. While not specifically stated by Hart, the steep bill might be due to the Model X’s all-aluminum panels, many of which need to be replaced entirely.

While unfortunate, the recent accident involving a Model X 75D seems to validate the NHTSA’s safety ratings for the electric SUV. Due to the vehicle’s weight and low center of gravity, the Model X was able to absorb the impact from the violent collision without rolling over.

During its announcement of the Model X’s 5-star safety rating, Tesla estimated that passengers of the electric SUV have a 93 percent probability of walking away from a crash without any serious injury. Looking at the aftermath of the recent Model X accident, it appears that Tesla’s estimate is quite accurate.

Jordan Hart runs Driving the Future, a YouTube channel dedicated to Tesla and its vehicles. Just last summer, Hart set a cross country record in a Model S 85D, traveling from Los Angeles to New York in 51 hours and 47 minutes. The feat was done in order to raise awareness to the human trafficking trade. According to Hart, his cross country Model S run, together with his wife’s recent Model X accident, just proved how reliable and safe the carmaker’s vehicles really are.

“The record run proved to me how reliable Teslas are. This unfortunate incident has proven to me how safe they are. I intend to never let my wife drive anything else.”