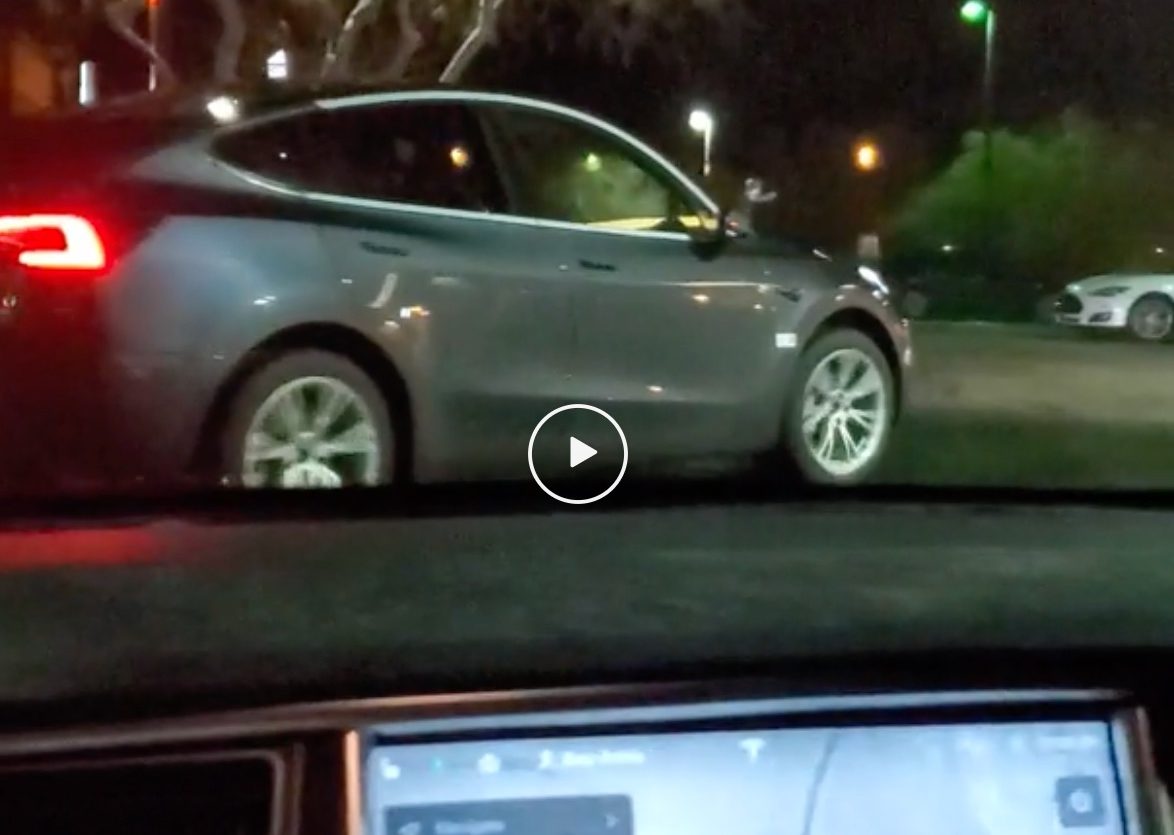 A Tesla Model Y with a combination of matte black window trim and Tesla’s signature chrome trim was spotted at the Barstow, CA Supercharger station over the US Thanksgiving weekend.

Tesla owner and Redditor ChooChooSparky recounts pulling up next to the all-electric crossover while charging, but without initially realizing it was a Model Y.  “When I pulled up I thought ‘Wow, they’re serious about blacking it out to take a nap.’ Then when he pulled off the cover and I saw the black model 3 style door handles, ‘That’s no regular Tesla SUV!!,'” noted the Tesla owner.

Another Redditor was in the scene and confirmed the sighting.

“My wife and I were there when it was charging. They had the car completely covered and the guy driving it stayed in the car. I would have never noticed it was a model Y if they hadn’t started putting the cover on,” user Uofaer wrote.

In a video posted to r/teslamotors, the Midnight Silver Metallic Model Y can be seen leaving the Barstow Supercharger station,  a common stopping point between Los Angeles and Las Vegas, and one of Tesla’s first fast-charging stations in Southern California. Noticeable is the Model 3-style door handles and “chrome deleted” matte black trim which made its first debut at the Tesla Model Y unveiling in early 2019. However, chrome trim was also present on the vehicle, a standard finish for the Model S, Model 3, and Model X.

“It actually looked like the chrome trim had tape wrapped all around it. A little part on the front door looked lifted up,” Redditor ChooChooSparky added.

Another Model Y spotted in the wild from r/teslamotors

This marks, at least, the fifth Tesla Model Y sighting in recent months and a strong indicator that pre-production could be taking place in early 2020. Just last month, a Model Y was spotted cruising along California Route 17 with several measurement apparatus most likely used to calibrate driver-assist features. Other Model Y sightings revealed the elusive “Wind Turbine” wheels, which were first showcased on a Model 3 prototype at the vehicle’s unveiling event.

As more and more sightings of the Model Y testing on public roads are reported, we can only assume that Elon Musk and his team are gearing up to produce what is anticipated to become the company’s best-selling car. Originally slated for the Fall of 2020, the new customer delivery date of Model Y has been moved up to Summer 2020.

There are also reports that Tesla has instructed parts suppliers BizLink and HOTA to begin production of Model Y parts earlier than scheduled. This indicates that mass production may soon start, possibly even before 2019 ends.

Tesla Model Y has a starting price of $48,000, seating for 5 to 7 people, and available in a Long Range, Dual Motor, and Performance configuration.