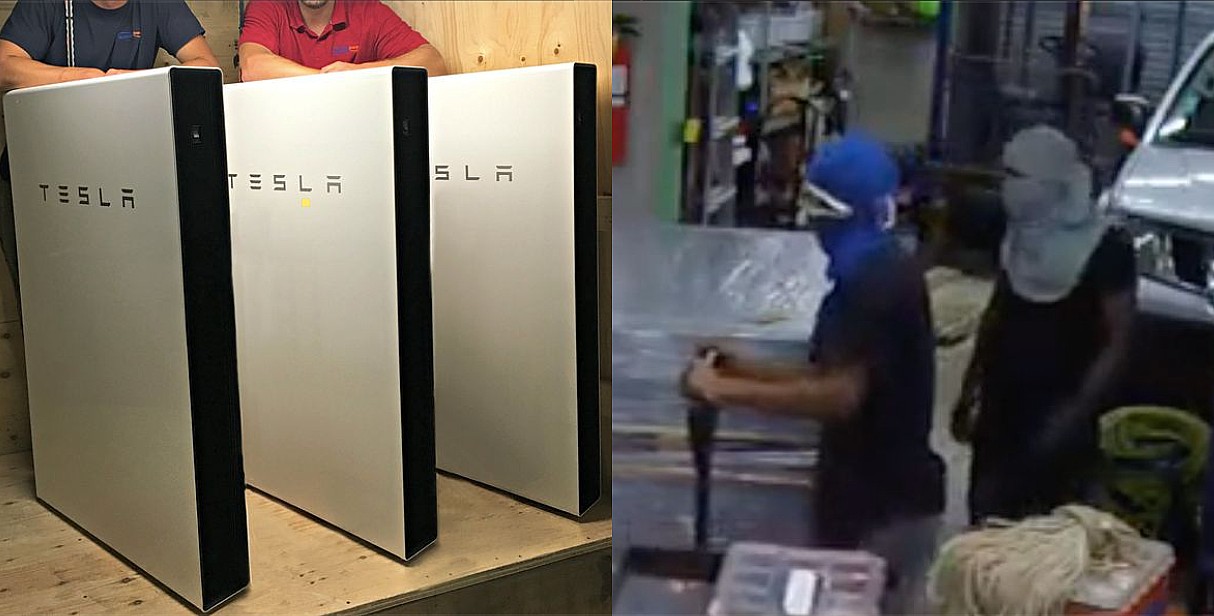 Last Friday, a warehouse owned by ProSolar Caribbean in the Virgin Islands was subjected to a rather strange theft. While its employees were spending time with family for the Thanksgiving weekend, a couple of men broke into the company’s St. Thomas warehouse and stole six Tesla Powerwall home batteries and a Ford SUV.

Following the theft, ProSolar Carribean proceeded to offer a $10,000 reward to anyone who could provide information that could help retrieve the Powerwalls, which are estimated to cost about $45,000 together. Fortunately for ProSolar, the Powerwall thieves did not seem to be the most competent.

Footage of the men was recorded by the surveillance system in ProSolar’s warehouse. A detective also found fingerprints on the site. Unbeknownst to the thieves, ProSolar promptly reported the theft to Tesla as well, providing the electric car maker with the serial numbers of the batteries that were stolen. With this in mind, ProSolar partner Brad Spernak noted in a social media post that the thieves were pretty much just harboring a “giant paperweight” in their hands.

Explaining further, Spernak noted that Powerwalls are sophisticated batteries that could not be operated in a simple manner. The batteries require additional equipment to run, and they are also monitored by Tesla, which provides over-the-air updates as they are released. Powerwalls are not even that valuable to those who salvage parts, since they do not have a lot of copper and valuable metals. Those that attempt to take apart a Powerwall may be out of luck too, since they are high voltage batteries.

The thieves also stole a 2008 Ford Escape, the oldest vehicle in ProSolar’s fleet and the one that is most prone to breaking down.

In a statement to the Virgin Islands Daily News, ProSolar Director of Operations Brian Walden remarked that he received a call from a detective from the VIPD on Tuesday morning informing him that the stolen Powerwalls and SUV have been retrieved. “They told me they recovered the car and the Powerwalls,” he said.

V.I. Police Commissioner Trevor Velinor, for his part, remarked that while the stolen items have been retrieved, police have not yet made arrests on the case. Velinor noted that an investigation on the matter is still ongoing, though based on what authorities have found so far, it appears that the thieves were familiar with the times when the ProSolar warehouse and a neighboring business would be unoccupied.

Unfortunately, the Powerwalls that were retrieved have been damaged, and thus, the batteries must now be returned to Tesla for recycling. Part of this is due to the thieves removing the Powerwalls from their boxes and sliding each one on the concrete floor. This resulted in the paint on one side of the batteries being scraped off.

As for Walden, he noted that he is just glad that the batteries had been retrieved. “The reward was offered partially to recover the material and also to incentivize someone and say, ‘Look, that behavior’s not appropriate.’ So right now, we’re glad to pay the reward, we’re glad that someone stood up and said that’s not right and we’re glad to get the material back, even if it’s not necessarily usable,” he said.