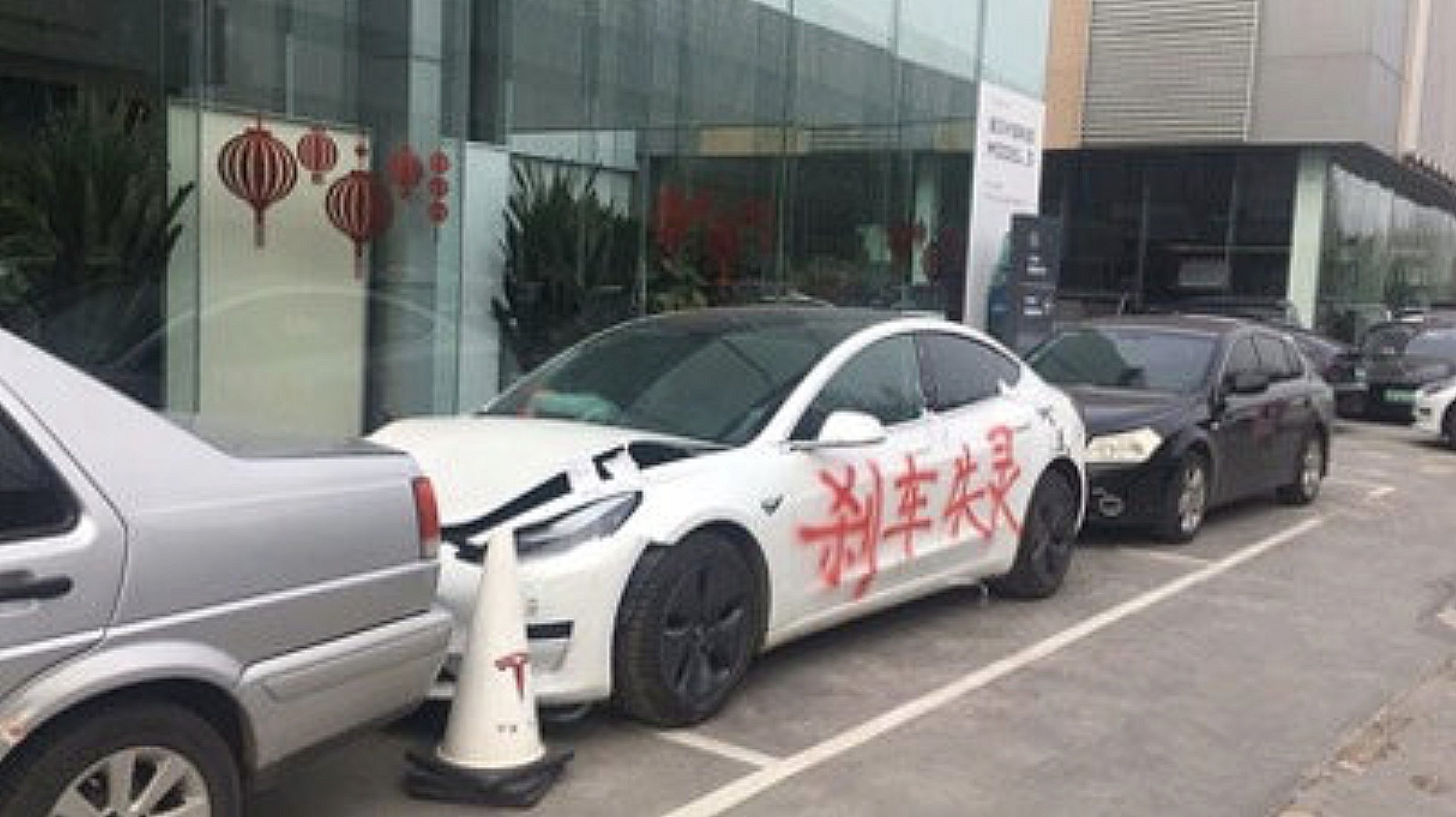 Tesla is navigating through a difficult bout with an owner in Shanghai, China, named Zhang Yazhou, who appeared at the Shanghai Auto Show last week in protest of what she claimed was a faulty Model 3 braking system. Tesla has now issued a more lengthy and detailed description of their encounters with Mrs. Zhang, revealing that she not only vandalized her own car with red spray paint, but she also denied any requests made by Tesla to have an independent, third-party company investigate whether the Model 3 had braking issues.

On April 19th, Zhang climbed on top of a Model 3 that was positioned at the Tesla booth at the Shanghai Auto Show. Wearing a shirt that said “Tesla Brake Failure,” Zhang yelled “Tesla brakes failed me” to a crowd of spectators who surrounded the all-electric sedan. As a result, Tesla has released several responses, including data from the accident that showed the driver, who was actually Zhang’s father, was driving at a speed that was above the posted speed limit and engaged the braking system successfully on more than 40 occasions in the half-hour leading up to the accident.

Now, Tesla is making more attempts to reveal the story to the public and is revealing its interactions with Zhang.

On Tesla’s official Weibo page, the company stated that Zhang talked to Tesla on April 27th, and the automaker was willing to continue communicating and try to come to a solution. After a five-day stint with the Police following the protest, Zhang returned home and told Tesla reps, “I just came back. I need to adjust. I hope you can show an attitude that really solves the problem. When you have this attitude, we will communicate.”

Tesla revealed that Zhang was in the passenger’s seat during the accident and that traffic police came to the conclusion that the driver, Zhang’s father, was “fully responsible for the accident because he did not maintain a safe distance from the vehicle in front.” After the vehicle arrived at a local service shop for repairs on February 22, Tesla says Ms. Zhang put a seal on the vehicle three days after its arrival so nobody could enter the car. Tesla says that Zhang believed the vehicle’s data could be tampered with, and this was the reason for the seal being placed on the doors. Zhang had the still-wrecked vehicle towed to Tesla’s Zhengzhou Fotamen showroom on March 5th, where it would be sitting in the public for everyone to see.

The following day, Zhang placed a banner that read “Brake Failure” on the car, and Tesla began offering Zhang the option of having third-party inspectors take a look at the car on their dime. Zhang refused, saying that she was not interested in having the car looked at by “non-accredited third-party testing agencies,” and warned that Tesla should “look for pressure from the media” if the car wasn’t returned.

Zhang then came back to the showroom where her car was located and spraypainted the exterior of her wrecked Model 3 with red paint. The words once again said, “Brake Failure.”

“The Tesla staff are still actively communicating with Ms. Zhang, trying to find a solution, and negotiating with her husband, Mr. Li, hoping to minimize the impact and help her maximize the benefits within a reasonable range. Mr. Li made it clear that he still has a “team” from Beijing assisting him, and being helped by others in “cooperating” with others can only be obedient,” Tesla added. Zhang resealed her vehicle on March 21st.

According to Tesla, Zhang then had the car towed to the Zhengzhou Dahe Auto Show, where two hired models stood beside the car. Zhang then made her appearance at the Shanghai Auto Show on April 19th. Tesla says that it is still working to iron out the situation and work with Zhang and her husband, who is identified as Mr. Li. Tesla sent a sealed version of the vehicle data that was available 30 minutes before the accident occurred to Zhang’s house.

“Since February, we have been doing our best to actively communicate with Ms. Zhang and her family. We sincerely hope that we can promote vehicle inspection as soon as possible and give a result to the friends who care about Tesla,” the company concluded.