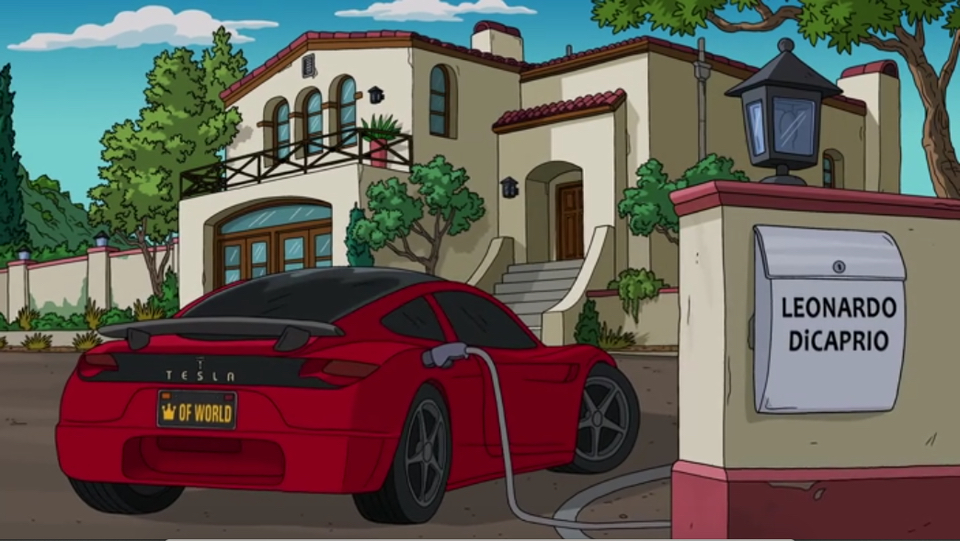 Tesla’s upcoming all-electric supercar, the next-generation Roadster, recently got a cool cameo in an episode of the long-running animated series The Simpsons. The new Roadster’s appearance in Season 32 Episode 5 of the long-running show was very brief, but it does highlight how Tesla’s vehicles are continually featured in mainstream media.

Quite interestingly, the new Roadster in the episode belonged to Hollywood A-lister Leonardo DiCaprio, who was charging the all-electric supercar inside his property. The words “Tesla” were clearly emblazoned at the rear of the car, together with a plate that read “King of the World,” a reference to the actor’s iconic leading role in Titanic.

Hints that the vehicle was the next-gen Roadster could be found on the car’s rear, roof, and silhouette, all of which bode a strong resemblance to the supercar unveiled in 2017. That said, the rear of DiCaprio’s Roadster in the recent Simpsons episode featured a two-tone paint job at the rear, a configuration that would be pretty interesting if implemented in the vehicle’s real-life version.

Roadster cameo in the latest Simpsons episode! from r/teslamotors

This is not the first time that The Simpsons has featured a Tesla in its episodes. Kent Brockmant has used his Model S’ Summon in the middle of an ongoing kerfuffle at the valet, and Mr. Burns had been shown stealing electricity from billionaire Richard Branson to charge his Tesla. Krusty the Clown was also shown physically attacking Homer in Season 30 Episode 8 while his Model S was on Autopilot. Elon Musk has been featured in a dedicated episode as well.

What is rather cool about The Simpsons is the fact that the show has an eerie knack for predicting the future. These range from Donald Trump’s presidency, Disney’s acquisition of 20th Century Fox, smartwatches, the rise of the game Farmville, and even the coronavirus pandemic. With this in mind, and considering the number of times that the show has specifically featured a Tesla, it would not be surprising if the electric cars do become ubiquitous in the coming years.

The seeds are already there, after all, with Tesla already building mass-market cars like the Model 3 and the Model Y, as well as an upcoming $25,000 electric vehicle. Projects like the Cybertruck, despite the pickup’s polarizing design, may eventually prove to be massive successes for the company. The same is true for projects like the Tesla Semi, which has the potential to disrupt the trucking industry.

In Season 26 Episode 6 of The Simpsons, the show featured a futuristic version of New York, and as it turned out, one of the biggest buildings in the city’s skyline was marked “The Tesla Building.” That’s not such a bad idea at all, minus the invading creatures in that episode, of course.