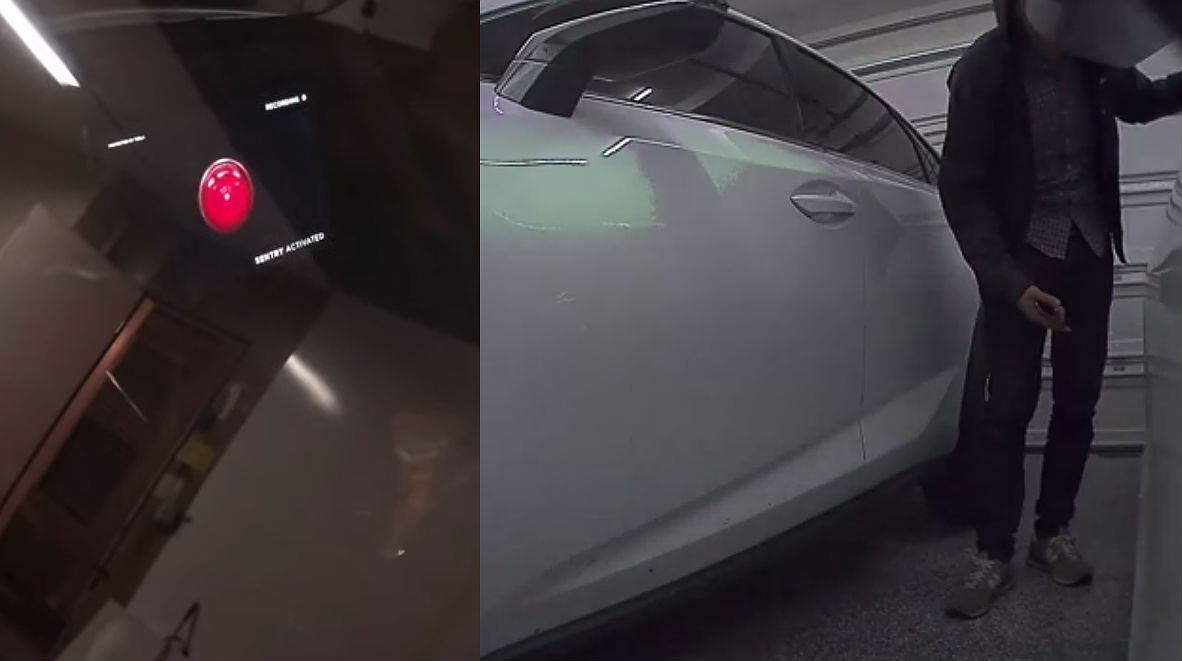 The first videos of Tesla’s Sentry Mode in action have been shared online. As could be seen in the recently-shared clips, the new feature taps into the vehicles’ systems and Elon Musk’s love of pop culture to deliver improved security in a very loud and very nerdy way.

Sentry Mode features three states. Once activated, the security system enters a “Standby” state, where the vehicles’ external cameras begin recording to monitor and detect potential threats. Sentry mode then enters an “Alert” state if the electric car perceives a minimal threat, such as someone leaning against the vehicle. An image from Model 3 owner and r/TeslaMotors member u/Spamium reveals that the “Alert” state involves the electric car’s center screen displaying visual warnings, including the red “eye” of 2001: A Space Odyssey‘s AI, HAL 9000.

One of the recently posted videos of Sentry Mode in action shows exactly how the “Alert” state works. In the brief clip, Model 3 owner Alex Najera attempted to open the vehicle by pulling on the rear door handle while the electric car was locked. Immediately, the vehicle’s lights flickered, the center display activated, and HAL 9000’s red eye started blinking on the Model 3’s screen. The words “Recording,” “Sentry Activated” and “Protected by Tesla” also became visible on the display.

In the event of a break-in, Sentry Mode enters the “Alarm” state, where the vehicle activates its audible alarms, maximizes the brightness of the center screen, and plays music at maximum volume. This, of course, attracts attention to the electric car, and in an ideal scenario, would disorient a thief enough to abandon a break-in attempt.

In a follow-up post on the r/TeslaMotors subreddit, Model 3 owner u/Spamium noted that he was able to trigger Sentry Mode’s “Alarm” state by pounding on his vehicle’s windows. The Tesla enthusiast later added that the Model 3 flashed its turn signals, activated its horns, and sent a push notification on his Telsa mobile app.

Interestingly, he also noted that the flashing turn signals and horns disengaged after he opened the Tesla app. It should also be noted that the Model 3 owner’s recent video does not provide an accurate representation of the volume coming from the car’s speakers in the event of a break-in, considering that the vehicle’s windows were fully rolled up.

The addition of Sentry Mode to Tesla’s security systems is a welcome update for owners, particularly those who were victims of break-ins. As noted by Teslarati after looking through police records of incidents involving Tesla’s electric cars, some of these break-ins, particularly in the San Francisco Bay Area, have rewarded thieves with generous spoils, such as luxury watches and premium gadgets.

Here is a video of Sentry Mode’s recording capabilities, captured from one of the Model 3’s cameras.

And here’s an extensive review of Sentry Mode from another Tesla Model 3 owner.