Tesla’s Sentry Mode is helping deliver justice again by capturing the faces of thieves involved in a Model S break-in and burglary in California.

The owner of the Model S, a urologist named Nishant Patel who practices in Santa Clarita, returned from a meal in downtown Los Angeles to find that a bag left in the back seat of his all-electric sedan containing a computer, checkbook and expired prescription pad had been stolen after the front right window was shattered. The Tesla app on Patel’s phone had alerted him to the incident immediately after detection, but he unfortunately missed the notification. Thanks to Sentry Mode, however, the entire incident had been captured on video and enabled him to provide police with close-up imagery of the suspects.

As seen in the captured video, two men are involved in the incident. A first man in a straw hat initially peers into the backseat of the Model S, after which he acts excited by what’s found and calls over to a second man dressed in all black. The second man then then breaks the front right window. Both men’s faces are very clear in the footage, and all angles of the break-in were included from Sentry Mode’s use of all 8 vehicle cameras.

At the time of the initial report of the incident by NBC LA, the Los Angeles Police Department had confirmed to Patel that the suspects had been identified, and that he’d be updated once an arrest was made. 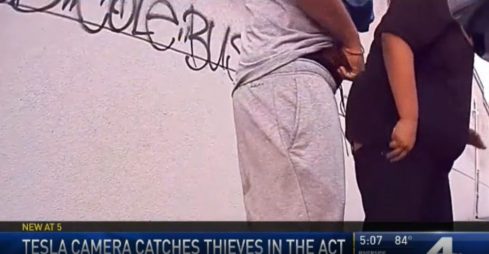 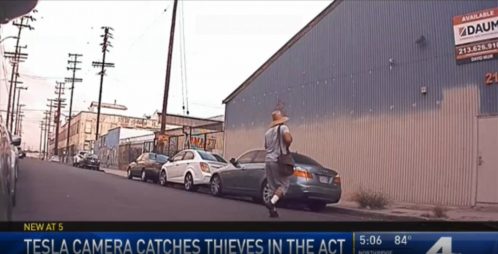 Tesla’s Sentry Mode has been a helpful tool for owners on numerous occasions since its release. In May, the feature captured two vandals laughing as they keyed a Model 3 and dented its door with the door of a Dodge Ram. A disgruntled neighbor was also captured spraying acid on a Model 3 in early June.

Perhaps one of the more well-known incidents assisted by Sentry Mode was a San Francisco break-in that happened in April wherein a Model 3 had its rear quarter window smashed. The car’s security system captured the perpetrator’s face and license plate, but the police did not respond quickly to the incident report, according to the owner. Once the break-in was escalated to the local news, however, the police then investigated and made an arrest shortly thereafter. Another incident in Philadelphia involving a hit-and-run by a local politician was also a well-read headline once the owner released the Sentry Mode video of the entire event.

Although Tesla’s Sentry Mode has already provided owners with a great set of tools to help deter and rectify illegal acts, the car maker continues to improve the feature with over-the-air updates. In response to owner requests, a location-based option was added in May, which enables drivers to set places where Sentry Mode automatically turns on. Among these options are “Exclude Home,” “Exclude Work,” and “Exclude Favorites”. That same update also enabled Sentry Mode to be be activated by saying “Keep Summer Safe,” a phrase taken straight out of Rick and Morty, an animated sci-fi dark comedy that CEO Elon Musk is fond of.

The full NBC LA video report of Patel’s incident is below: