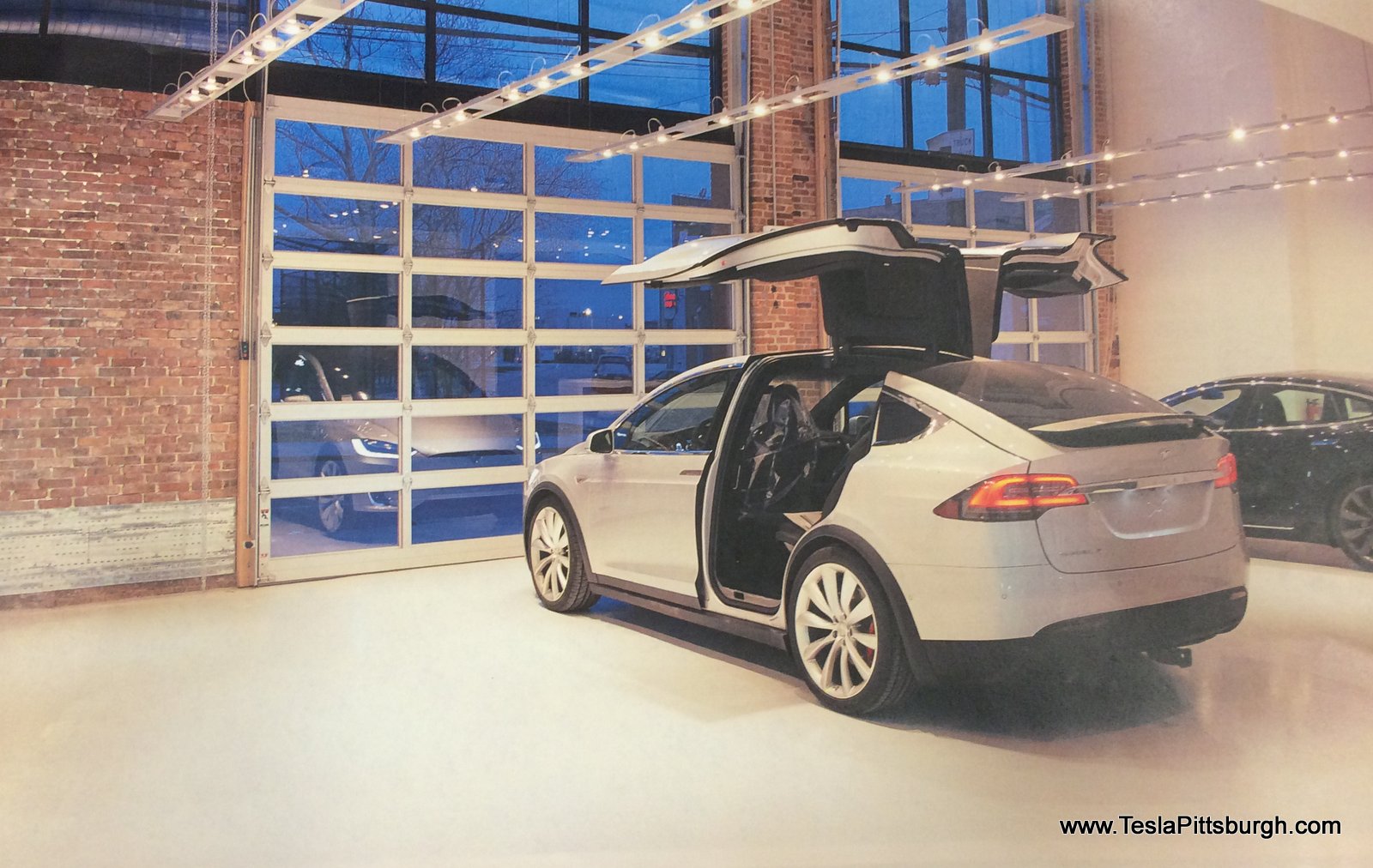 Tesla’s mysterious plans for a Pittsburgh Service Center have been rumored for several years but nothing could be confirmed. Then about a two months ago, concrete information began appearing on the public record. In June, Marshall Township planners gave their approval for the plans to move forward and now that they have been approved by the township supervisors, it’s time to release all the known details. If you look closely at the pictures, you may recognize a logo imprinted on the face of the main entrance: the logo of Ethan Allen Furniture.

The store was sold to a Florida-based LLC in February. That LLC retains ownership of the building and will lease it to Tesla.  In accordance with legislation already passed by the state government, the company is allowed five “dealerships” statewide. The property is located north of the city between Wexford and Cranberry in Marshall Township. As early as April, Tesla was on the agenda for the Planning Commission, but then postponed their appearance. 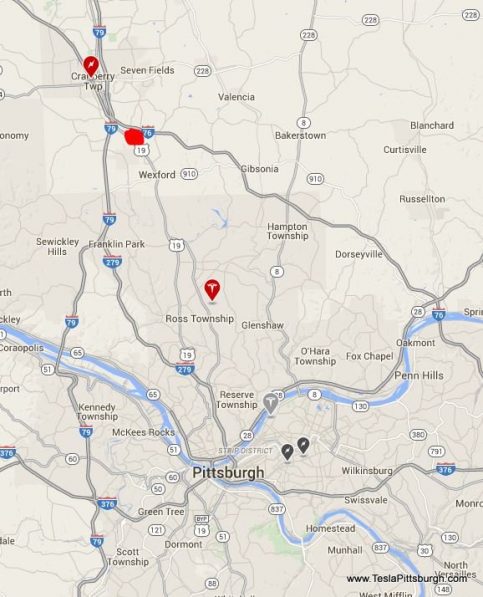 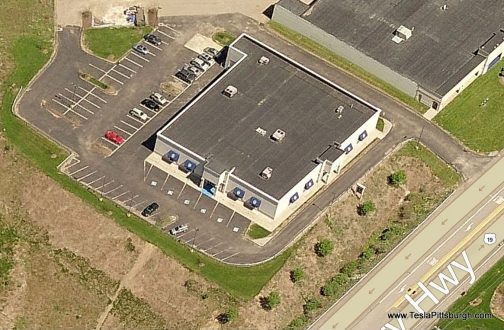 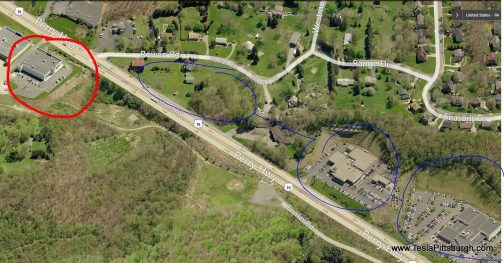 The upper red Tesla mark is the Cranberry Township Supercharger (map). I’ve placed a red dot on the site of the former Ethan Allen. The red Tesla mark in the middle of the map is the Ross Park Mall store location where the company recently held an exclusive grand opening event. The light grey Tesla mark is likely used to denote the geographic center of our local Ranger’s service area. The two smaller dark grey marks are destination chargers in the city.

The former Ethan Allen is on Route 19 (also known as McKnight Road as it passes through the closer suburbs), a busy commercial corridor that stretches through the entirety of the northern Pittsburgh region and on up through Cranberry (where the Supercharger is). The section pictured above is the third major concentration of car dealerships along the road, between the Wexford and Warrendale exits of I-79. The former Ethan Allen is circled in red. The brighter two blue circles are existing Lexus, Volvo, Land Rover and Jaguar dealerships. The blue circle closest to the Ethan Allen is currently being developed into a Maserati dealership. Somewhere in that row there will also be a Bentley dealership. The new service center shares a plaza with another building that houses some medical offices and a backyard playground equipment store. The terrain necessitates that customers choose between driving down a blank-walled alley or around the side of the store (which looks like it should be the front). The lot is somewhat awkward, but it does have a commanding view over the nearby dealerships from the side-oriented main entrance. The shaded parking spaces indicate Tesla’s planned areas for inventory cars.  One of the supervisors questioned if that was an adequate number, but given Teslas are built-to-order they rarely have a lot of on-hand inventory– unlike a traditional dealership. There is a lot of additional parking along the backside of the store– but that’ll expanded even further for service loaners, deliveries and customer cars waiting to be serviced or picked up.

Having never shopped for a retail property, it’s hard to gauge how big some of the stats on the realty company’s brochure are– but the building certainly seems large enough and Tesla will have no problem filling it from wall-to-wall. The interior of the store looked wide open for possibilities on paper, but that ignores some of the facts on the ground as you’ll see in a moment. The side-mounted lobby splits the building down the middle, with service on the backside edges and retail on the front sides where the windows are. Not much can be done along the alley-facing wall other than offices and storage, since all the restrooms and utilities are there.

Here’s the approach from Route 19 to the building. The dated beige and pink will be going away, replaced with a clean and modern palette of white and dark grey. It’s only after you drive up to the building that realize the front door isn’t the front door. There’s no parking here and no room to add any. Tesla will also be putting some money into new exterior lighting and removing the awnings and their metal frames.
A large side-folding door will be added to the road-facing façade. It will accordion open to allow customers to drive their newly delivered cars out onto the street for the first time.

Sneaking a peek inside the glass doors, the building’s former life is still quite evident. Walls for all of the display “rooms” for the furniture litter the floor plan. They’re not substantive but it will still be a lot of debris to clear. The tiled “path” around the store will also be demolished. Floor treatments are expected to be a combination of tile and polished or painted/sealed concrete. 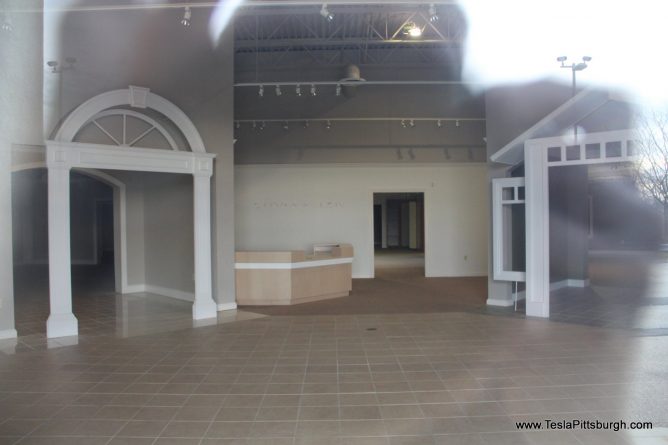 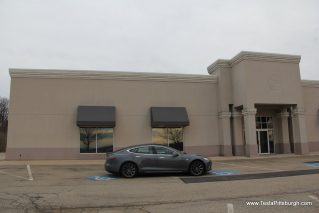 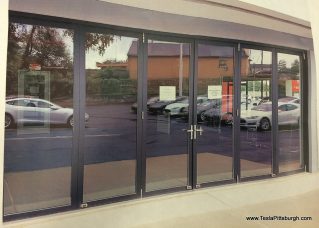 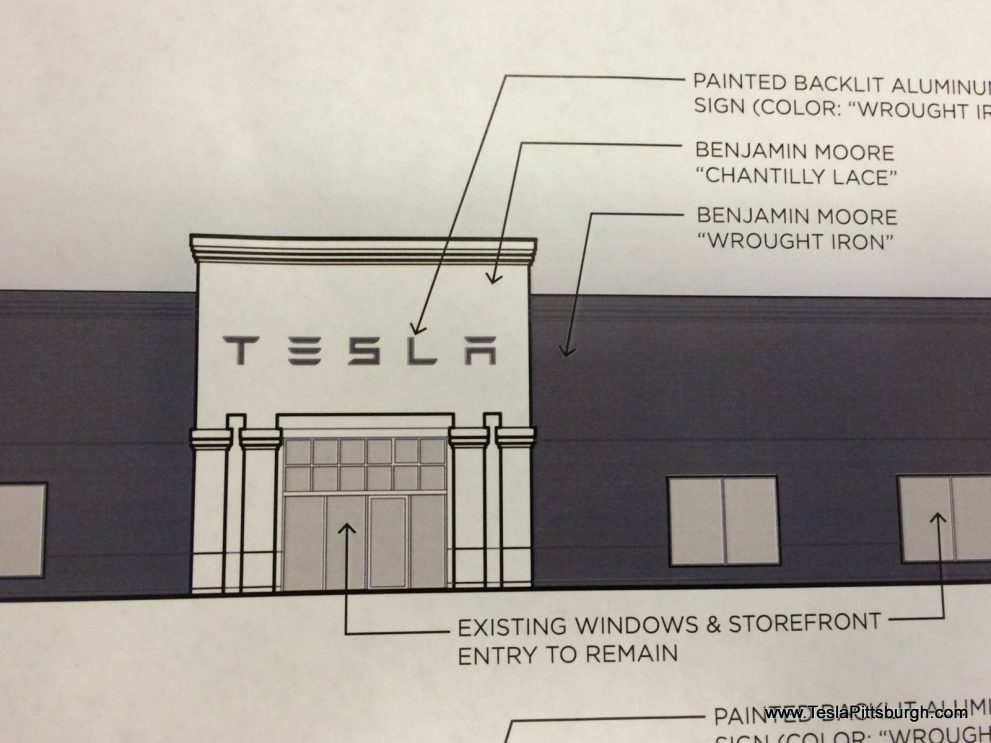 Rounding the corner, it becomes clear that I didn’t respect the handicapped parking lines during my scouting run last winter. There, I admit it—but I wasn’t exactly putting anyone out, so save your letters for the bro-trucks blocking Superchargers.

The main entrance shows the Ethan Allen logo engraved into the façade. All the other signage was simply painted over with what seem to be black rattle-spray cans. Tesla will be renewing the stucco and painting it in their own colors with back lit signs similar to their other locations.  You’ll note in all these pictures that the current state of the parking surface is not particularly inspiring either. More expense but also more confirmation that Tesla is willing to make some major capital investments into the Pittsburgh market.

Looking inside the main doors, you can see how the lobby splits the building into two halves. Tesla’s current floor plans indicate a receptionist will guide you to the right for sales, straight ahead to a lounge area or to the left where service advisors have their desks. Like the road-facing façade, the main façade will be gaining a large door. Located on the far left side, the door will be a large commercial sized rollup door. The door will open into a drive-through passage leading behind the service desks and customer lounge and into the work areas of the service department. According to the plans, it seems necessary that this will designated as either an entrance or exit.

The layout of the building means that the back of the store is actually the side next to the front of the store… instead of the side opposite. For Tesla this presents an interesting opportunity in their renovations in that everyone who visits will get a clear look at the work going on as cars are driven in for service. For most dealerships the service area is hidden away behind the store and often a bit grimy, but for Tesla it’s actually a selling point with typically clean and bright work areas with colorful machinery and tools. Hopefully they’ll include windows from the customer lounge area to the service area. 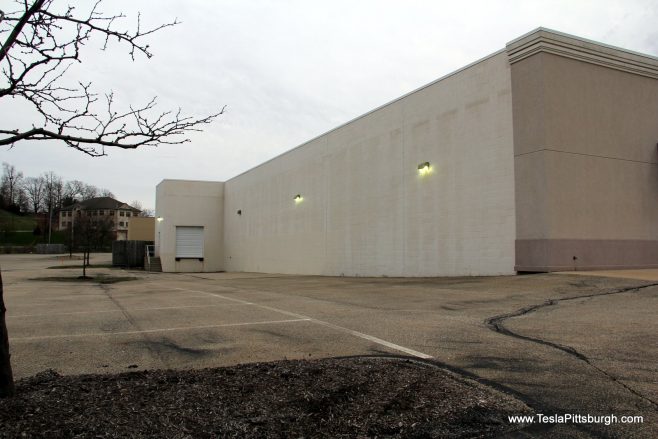 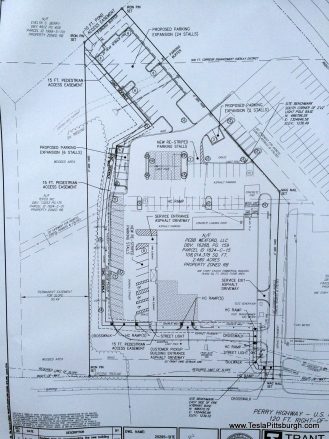 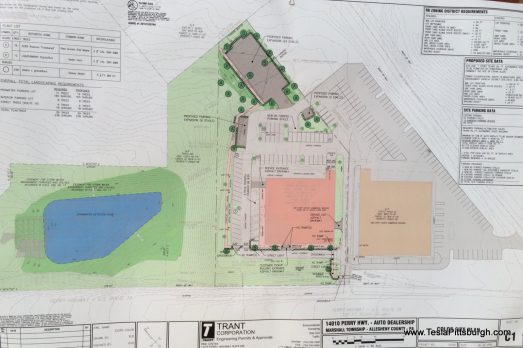 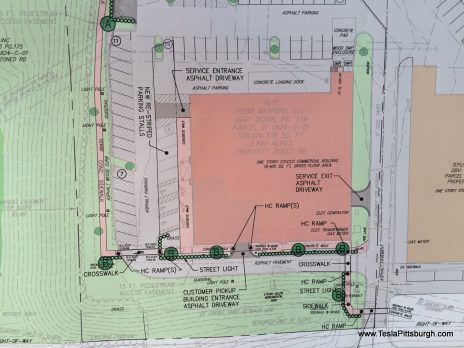 If you consider that the existing loading dock is level with the internal floor, you can see there is an elevation change issue for that main wall’s new vehicle access. Not sure how they’ll resolve that discrepancy but the floor plans suggest a ramp up into the service area will be necessary while the loading dock is retained for parts delivery.

The rear of the property will be getting an additional 24 parking places and extensive landscaping. The parking expansion is probably just for the ebb and flow of deliveries but could also indicate that Pittsburgh might host some of the regions CPO cars as they await reconditioning and resale. A number of other parking stalls are added here and there as the lines are revised, but there is no immediate evidence of customer HPWCs or charging slots.  Chargers for service/store use are expected to be in the ten shaded spots marked in the middle of the back lot.

The presence of an easement for utilities would suggest power for part of the lot could be made readily available even though the building’s utilities are currently located on the farthest alley corner. Completing our lap around the outside, the alley/driveway between the former Ethan Allen and the neighboring building shows an arrow straight driveway from Route 19. This will be great for trucks delivering new cars and for the Rangers (and their trailers) who will be based out of here. Tesla’s plans indicate another large rolling garage door will be added to the front half of this side. That door will access the service area directly and will probably be designated as either entrance or exit only. Exiting the parking lot on the other side provides easy access to another arrow straight road back to Route 19.

If all goes according to what appear to be Tesla’s plans, it’ll– quite literally– be an uphill battle for the some of the local dealers because Tesla will hold the high ground in Marshall Township.  Construction is expected to begin almost immediately with a grand opening late this year, perhaps November.

One interesting prohibition that did come from this meeting. The supervisors are limiting the site to the sales of car and associated retail merchandise and accessories. The company is specifically forbidden from selling “other product lines” such as the Powerwall. If Tesla decides later they’d like to market those (or SolarCity panels), they’ll have to reappear in front of the board for approval.