The latest “My Tesla crashed for no reason while on Autopilot” saga continues after a driver claims his Tesla Model X was destroyed when it crashed on a country road in Montana while driving on Autopilot (AP). The discussion took place on the Tesla Motors Club forum with a a friend of the driver whose screen name is Eresan stating,

“Both 2 people on car survived. It was late at night, Autopilot did not detect a wood stake on the road, hit more than 20 wood stakes, tire on front passenger side and lights flyed away. The speed limit is 55, he was driving 60 on autopilot. His car is completely destroyed. The place he had accident does not have cellphone signal, it is 100 miles from the hotel. We are on a 50 people Wechat messenger group. I woke up today saw he managed to get internet to ask people in the Wechat group to call tesla for assistant.”

New details emerge from Tesla indicating that logs from the Model X show that Autosteer was enabled. However the vehicle detected no force on the steering wheel for more than two minutes and thus began to gradually reduce speed, stop, and turn on the emergency lights, according to a statement issued by a Tesla spokesperson.

The car traveled around a right hand curve, then went off the road. It traveled about 200 feet on the narrow shoulder, taking out 13 posts, said trooper Jade Shope. No citation was issued to the drivers because the trooper believed any citation would be void if the car was operating on Autopilot as claimed by the driver. That is a fairly curious position for a law enforcement officer to take, since there is no way for authorities to determine at the scene of an accident whether Autopilot actually was or was not activated.

So what happened? Driver error? A computer error? No doubt, Tesla will have information about the crash available soon after it downloads the data stored in the car’s computer. But there already are people on TMC questioning the authenticity of the driver’s claim that Autopilot was engaged in this Model X at the time. 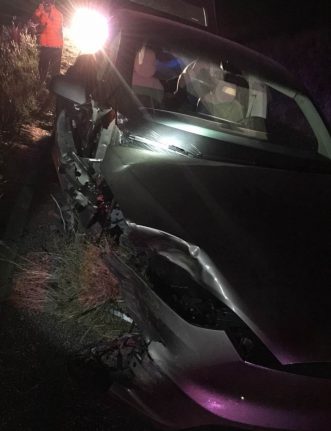 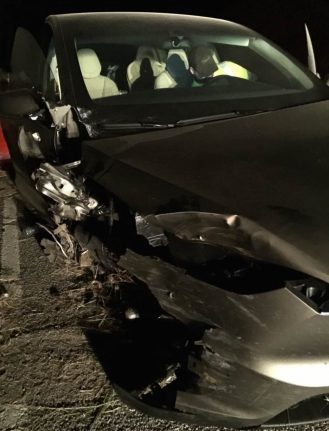 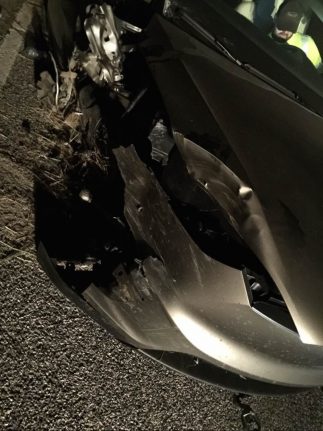 Several TMC members have commented that using AP on a dark country road with crossroads at 2am in the morning is not a smart thing to do. There are also questions about the speed limit on that section of road. 60 mph seems too fast for conditions under any circumstances. TMC member mrElbe posted, “And I thought Tesla drivers were a bit brighter than the average one out there. But apparently not! Using AP at 2am on a sketchy road is just negligent.”

To which Eclectic responded, “Or even suicidal. I know the area where the accident is said to have happened and it’s not a place for AP use at 2 AM. There are all sorts of animals that cross roads in the area, from deer to antelope to even elk. Whatever the person was doing at 2AM, he or she made a series of bad calls. I couldn’t imagine using AP on I 90 under those conditions, let alone a county road in farm/game country.”

Eresan added a second post several hours later that read, “Just got more photos from the driver. The car was in autopilot at speed between 56-60, the car drove off the road hit the guard rail wood posts. I questioned him how can AP drove off the road himself, he said he also want to find out. Photo attached the wood posts he hit.”

The implication is the driver suspects Autopilot failed and wants an explanation from Tesla. This all comes at a time when the press is buzzing the fatal accident in Florida two months ago and the Model X that rolled over on the Pennsylvania Turnpike last week. NHTSA and NTSB are now conducting investigations that may lead to a tightening of regulations on semi-autonomous systems like Autopilot.

TMC member electricity says, “I’m starting to fear Tesla will limit AP even more and screw it up for the rest of us because of the stupidity of others.” To which zambono replied, “Title [of the thread] should say, ‘Idiot using technology incorrectly crashes vehicle and blames others’.”