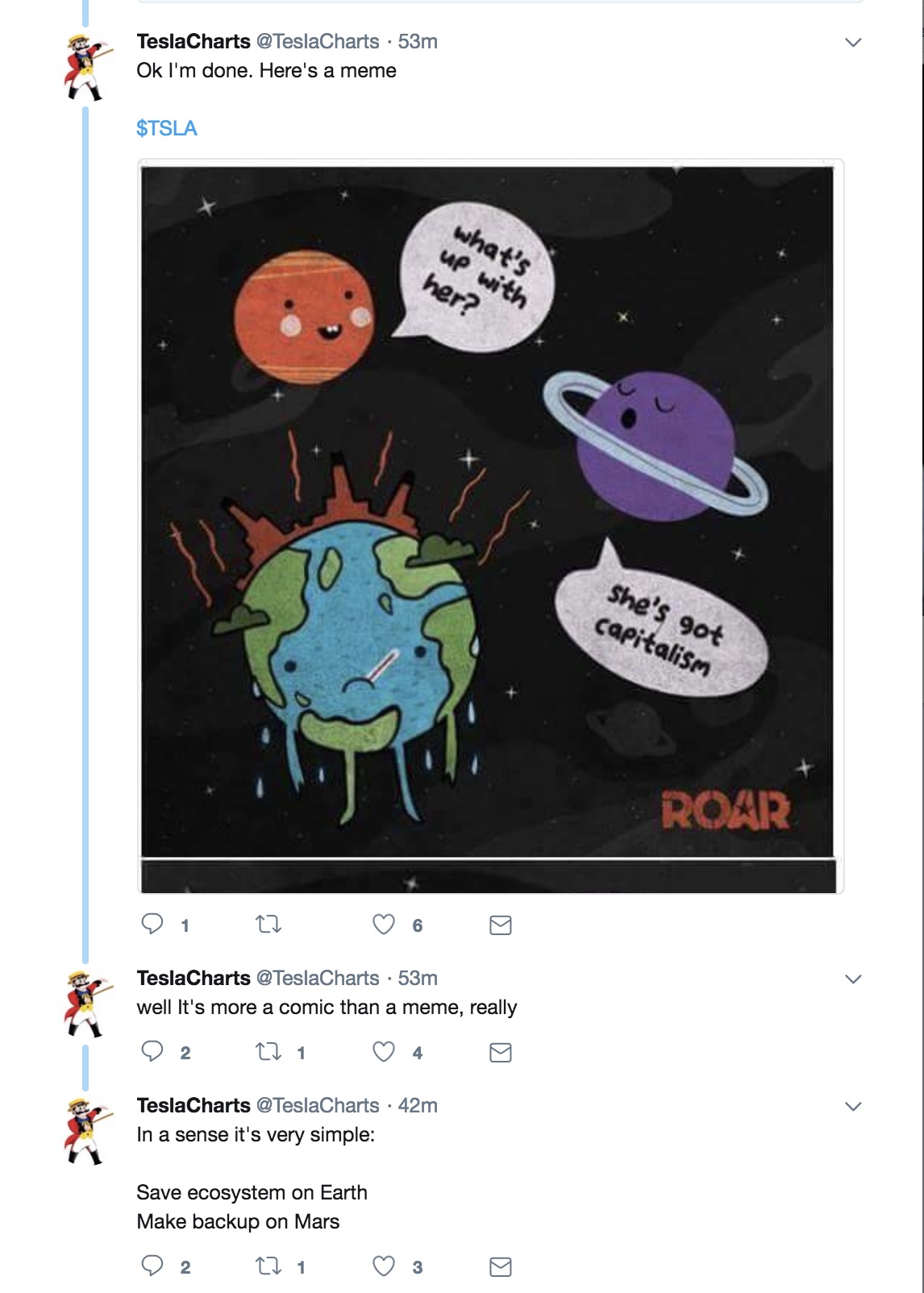 Tesla is a polarizing company, attracting equal numbers of dedicated followers and staunch critics. This is particularly prominent on Twitter, where Tesla bears and bulls spar on a daily basis about the state and future of the company. As the lineup of Tesla’s supporters and dissenters continue to grow by the day, parody accounts of some known short-sellers have emerged, such as @TesIaCharts (a parody account of known short-seller @TeslaCharts) on Twitter. One of these parody accounts recently took to Twitter to discuss Elon Musk’s vision for humanity, and surprisingly, the thesis presented actually makes sense.

Tesla is the most shorted stock in the US market. Thus, it is unsurprising to see many outspoken critics online, some of whom admit to holding short positions in the company. A number of these short-sellers have become the center of their own drama over the past month, such as Seeking Alpha author and outspoken bear @MontanaSkeptic1, who opted to leave Twitter after his identity was unveiled and became a focal point for Elon Musk.

Here’s a link to the tweets themselves, but in the event that the account deletes these tweets later, here are some screenshots of the epic thread.

As constant dissenting voices to Tesla’s initiatives, short sellers have managed to attract the ire of Elon Musk. When Musk posted his first blog post last week about taking the company private, he specifically mentioned entities that are incentivized to attack Tesla — a direct reference to short-sellers.

“As the most shorted stock in the history of the stock market, being public means that there are large numbers of people who have the incentive to attack the company. I fundamentally believe that we are at our best when everyone is focused on executing, when we can remain focused on our long-term mission, and when there are not perverse incentives for people to try to harm what we’re all trying to achieve,” Musk wrote.

Elon Musk’s reactions on social media and his open disdain for Tesla’s short-sellers is one of the areas that he can definitely improve on. Musk is never one to back down when faced by an aggressive critic on Twitter, and as the past months have shown, there were multiple times when Musk, unfortunately, left arguments worse for wear.

Nevertheless, considering the amount of negativity and drama surrounding TSLA, a good degree of Musk’s temperament towards bears and short-sellers is quite understandable. Some Tesla bears, after all, have a tendency to attack Tesla and its supporters without hesitation. Among these is Gordon L. Johnson, an analyst from Vertical Research Group and a noted Tesla bear, who ended up apologizing to his firm’s clients after he issued a note he wrote based on inaccurate information being spread about Tesla.