The Tesla Model 3 recently got its first professional review from a veteran auto journalist. In an article published in the Wall Street Journal, Pulitzer-winning journalist Dan Neil gave the Model 3 performance a glowing review, stating that the car is a “magnificent” piece of automotive engineering that is “representative of the next step in the history of autos.”

Tesla is currently offering test drives for the Model 3 Performance in selected showrooms across the United States. Key publications such as CNET‘s Roadshow also posted teasers about an upcoming review of the vehicle. Based on Neil’s report, the Model 3 Performance is being touted as one of the electric car company’s best vehicles as of date — one that can push Tesla to new heights.

Dan Neil’s review of the Model 3 Performance was largely positive. Though he stated that the car would have performed better had it been equipped with better tires, and he likened the vehicle’s 15-inch touchscreen as the “broken flower pot on Mona Lisa’s head,” Neil was nonetheless impressed by the electric sedan. Neil noted in his WSJ article that while Tesla as a company has its own fair share of issues, including those fueled by CEO Elon Musk’s actions on Twitter, the Model 3 Performance is a star, considering its speed, raw power, and handling. Neil’s observations about the car’s performance mirrored some of the conclusions of Sandy Munro, who conducted a teardown of the Long Range RWD Model 3. Just like Neil, Munro gave a positive review of the vehicle’s capabilities, even stating that whoever designed and tuned the Model 3’s suspension could easily be an “F1 Prince.”

Thanks Dan, you are a tough reviewer, so this means a lot coming from you. Please lmk even smallest nuance that can be improved. https://t.co/eRuPyN1p7I

Neil’s positive review did not sit well with Tesla’s staunchest critics. His Twitter feed, for one, was quickly filled with vitriol. The comments section of his Model 3 Performance review in the Wall Street Journal were filled with much of the same criticism as well. Neil defended himself on both places, and on Twitter, he ended up crossing tweets with some notable Tesla short-sellers, including Mark Spiegel and the vocal MontanaSkeptic1, who recently debated Tesla bull Galileo Russell on the Quoth the Raven podcast. Over the weekend, and amidst what appeared to be an overwhelming amount of negativity from Tesla shorts, Neil opted to delete his Twitter account. Fellow automotive reporter Urvaksh Karkaria posted a tweet later on claiming that Neil decided to let his Twitter account go because of the responses to his Model 3 Performance review.

so #teslatwitter ran @Danneilwsj off Twitter. humans are so overrated. a damn shame, really.

Screenshots of Neil’s final hours on Twitter were captured by members of the Tesla Motors Club, and from what could be seen in the images, the Pulitzer-winning journalist was engaging Spiegel and the MontanaSkeptic1 before he deleted his account. Both Tesla shorts seemed to have taken issue about why Neil has not reviewed the Jaguar I-PACE yet, as well as the $35,000 Standard Range RWD Model 3. One of Neil’s responses to Spiegel also gave the impression that the Tesla short was suggesting the vehicle given to the journalist was “prepped” especially for him (a notion that Neil described as having “no possibility”). 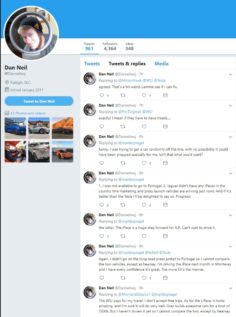 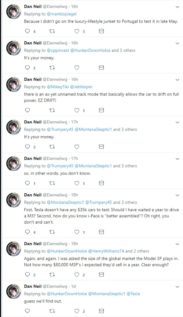 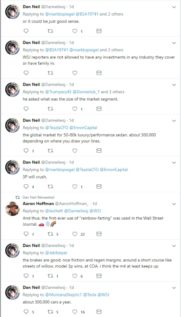 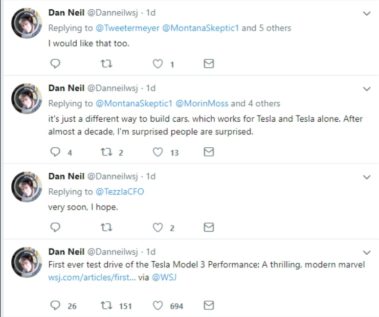 Overall, it is unfortunate to see journalists of Dan Neil’s caliber be subjected to criticism simply because he wrote down his opinions about the Tesla Model 3 Performance. Neil, after all, might be friendly with Musk, but he is never one to shy away from questioning the CEO’s statements. Back in 2011 alone, Neil made a bet with Musk about when the company could start producing the Model S. In an article in the Los Angeles Times, Neil described Musk’s timetable for the all-electric sedan as an “audacious timeline that makes many in the car industry roll their eyes.”

Tesla might be controversial amidst Elon Musk’s occasional Twitter outbursts and the company’s tendency to meet its target timelines later than expected, but at the end of the day, the vehicles it produces ultimately speak for themselves. After all, professional reviewers like Neil, who are veterans of the auto industry, are praising the Model 3 Performance not because of Elon Musk’s rockstar status, but because of its own merits. And that, ultimately bodes well for Tesla.