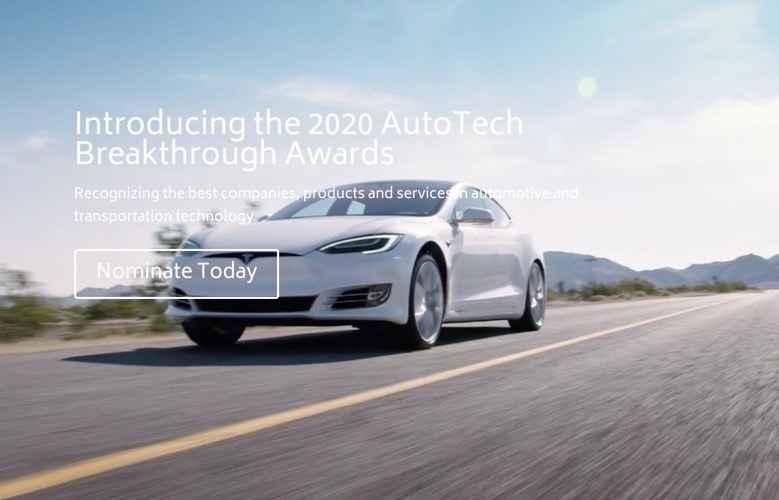 For its inaugural year, the organization received over 1,250 nominations from 12 different countries across the globe. Each nomination was evaluated by a panel of experts within the larger tech industry, with winning products and companies being selected according to a set of metrics. Bryan Vaughn, managing director at AutoTech Breakthrough, described the nature of the awards in a press release.

“The quest to build mobility systems of the future presents a myriad of complexities and the AutoTech Breakthrough Awards program aims to recognize ‘breakthrough’ transportation models and technologies that are addressing these complexities head-on, laying the foundation for more integrated and seamless mobility around the world. Our 2020 AutoTech Breakthrough Award winners circles provides a glimpse into where mobility is headed and we extend our sincere congratulations to all of the exceptional honorees as they pave the road for the future of the Transportation industry,” he said.

AutoTech Breakthrough’s inaugural awards listed some surprising winners in its “Electric Vehicles” category. The company did not list the nominees it received for the segment, but it did announce that General Motors won the “Auto Battery Technology Innovation of the Year” award. Lucid Motors, which recently took the wraps off the production version of its Air sedan, was selected by the awards’ panel of experts as the “Overall Electric Vehicle of the Year.”

GM has made announcements about its Ultium battery program earlier this year, which are large-format, pouch-style cells that can be stacked vertically or horizontally inside a battery pack. The Ultium batteries, which are designed for Level 2 and DC fast charging and are sized up to 200 kWh, will be used in the Hummer EV, GM’s competitor to vehicles like the Rivian R1T and the Tesla Cybertruck. That being said, GM has not released the specifics of its Ultium batteries in the same way as Tesla with its upcoming tabless 4680 cells, which were extensively discussed during Battery Day.

Quite interestingly, AutoTech Breakthrough’s awards did not feature any products or vehicles from Tesla, despite the market intelligence firm featuring the Model S heavily on its official website. Tesla was also mentioned by the organization in its discussion about the transportation market’s ongoing shift towards the adoption of electric vehicles.

Read the press release for the inaugural AutoTech Breakthrough Awards Program below.