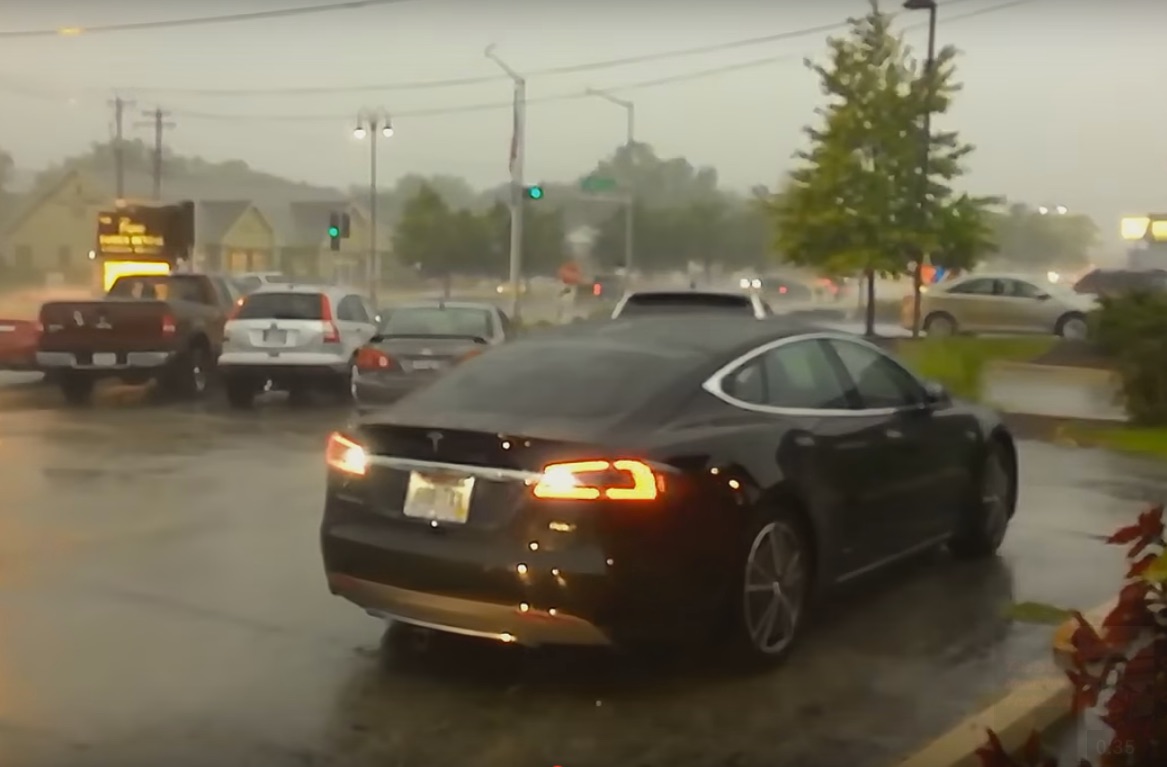 Amidst all of the excitement surrounding Tesla’s latest set of engineering achievements in Firmware 8.0, we tend to lose sight of how progressive the company has been through the many introductions of industry-first automotive feature sets. One such feature is Tesla’s Summon capability that allows Model S and Model X owners to remotely control their vehicles through a mobile app. or key fob.

Akin to controlling a large remote control toy car, albeit one that can cost upwards of $100k and outrun a Lamborghini, owners can use Summon to prompt their Teslas to automatically drive itself out of a garage and come to greet them each morning. Or an even better scenario, which we recently caught on YouTube personality KmanAuto’s channel, Summon a Tesla to come pick you up during a heavy downpour.

Watch as Kman’s Model S turns itself on before backing out of a parking space to pick up its owner during a torrential rainstorm. A bystander is heard asking, “How does that work?”, to which Kman has a simple reply. “Magic”.

Tesla released the Summon feature earlier this year as part of a Firmware 7.1 over-the-air update. The feature, currently in Beta and arguably a critical component to the company’s Autopilot suite, is a first step towards the company’s goal to build fully autonomous vehicles. According to Tesla, “Eventually, your Tesla will be able to drive anywhere across the country to meet you, charging itself along the way. It will sync with your calendar to know exactly when to arrive.”

The company’s statement is inline with what CEO Elon Musk told analysts and investors earlier this year during its second quarter earnings call. “Full autonomy is going to come a hell of a lot faster than anyone thinks it will. And I think what we’ve got under development is going to blow people’s minds. Blows my mind.”

As fleet data continues to assist Autopilot with drawing out higher-definition maps, combined with innovations in charging technology that will eventually allow a vehicle to charge itself, future iterations of Summon will be part of an all-encompassing suite of features that initiates fully autonomous driving.

According to Musk, “Full autonomy, it’s really a software limitation. The hardware exists to create full autonomy, so it’s really about developing advanced, narrow AI for the car to operate on. I want to emphasize narrow AI — it’s not going to take over the world, but it needs to be really good at driving a car. So, increasingly sophisticated neural maps that can operate in reasonably sized computers in the car — that’s our focus. I’m very optimistic about this. It’s exciting, it blows me away, the progress we’re making. So I think if I’m this close to it and it’s blowing me away, it’s really going to blow other people away when they see it for the first time.”