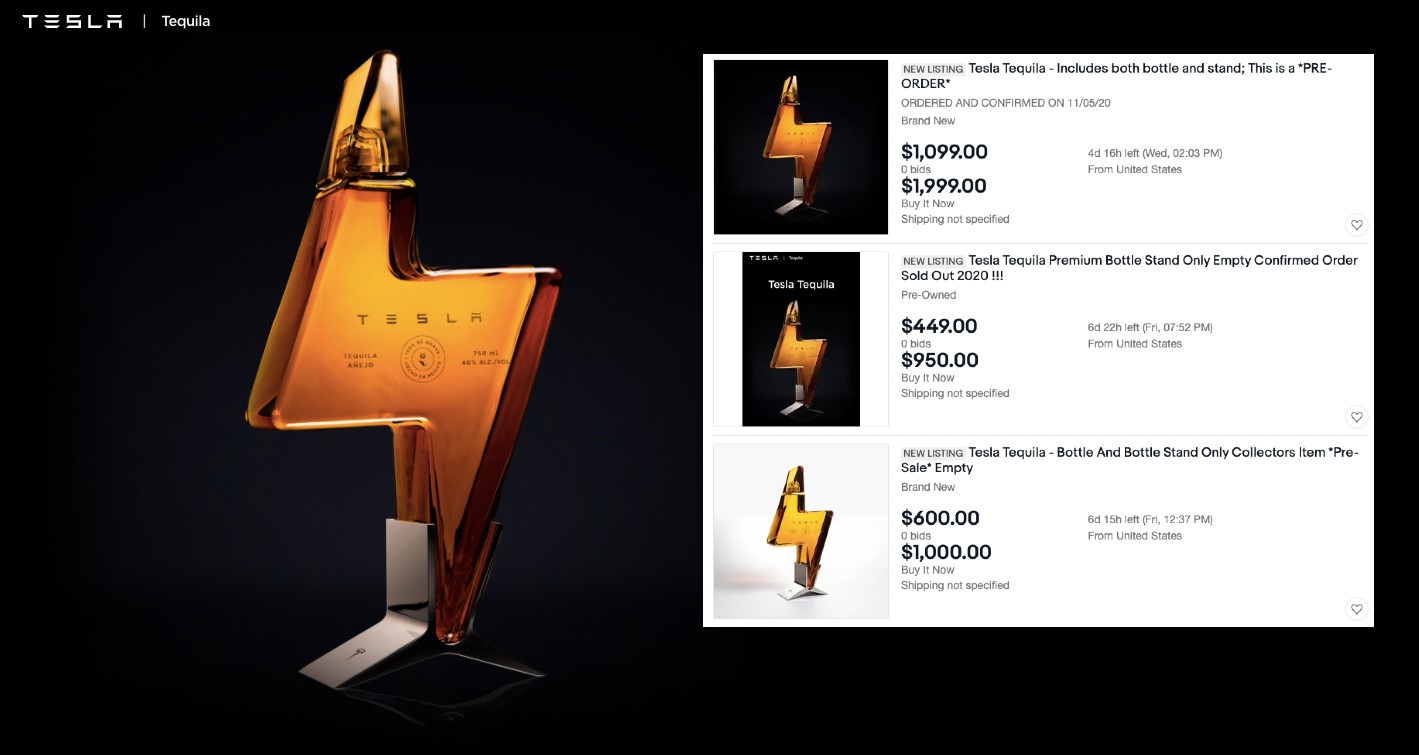 Scalpers are already selling Tesla Tequila for $500-$1000 on eBay

Similar to Tesla’s other limited-edition merchandise, Tesla Tequila appears to have attracted scalpers online. Just hours after going out of stock in the electric car maker’s official shop, listings for Tesla Tequila started getting posted on eBay. And they are not affordable, with some bottles commanding a price of $500 to over $1,000.

What’s rather interesting is that some of the listings seem to be only selling empty bottles of Tesla Tequila. Other entries list only parts of the product such as its metal base. Some of these entities were observed promptly by the Tesla community, with TSLA shareholder Christopher Dungeon sharing a number of them on Twitter.

Inasmuch as the prices of the Tesla-branded alcoholic beverage are quite shocking due to scalpers online, this is not the first time that such a thing happened. When the Boring Company Not-a-Flamethrower went out of stock back in February 2018, it did not take long before scalpers were pricing the limited-edition product well into the thousands of dollars. The Boring Company Not-a-Flamethrower was sold by the tunneling startup for $500.

The Tesla Tequila does have the makings of a future collector’s item. The product itself is very attractive and well-designed, with its lightning bolt-shaped bottle and stunning metal base. Considering Tesla’s other merchandise, there is a very good chance that Tesla Tequila will likely come with some well-designed packaging as well. Javier Verdura, director of product design at Tesla, remarked on Twitter that the company had fun designing the alcoholic beverage.

The wait for the release of Tesla Tequila took about two and a half years. Since the product was teased by Elon Musk in a lighthearted and undoubtedly controversial April fool’s joke in 2018, the alcoholic beverage was immediately requested by the Tesla community. These requests became even more notable when Elon Musk shared what appeared to be a mockup of a “Teslaquila” bottle on his now-deactivated Instagram page.

Tesla eventually applied for a USPTO trademark application for “Teslaquila” but it was rejected by a patent examiner since the name was allegedly too similar to “Spirit Tesla,” a beverage from Serbian brewing company Valjevsko. Considering that the electric car maker released a product called “Tesla Tequila,” it appears that the company has, at least for now, not pursued its initial branding.

Scalpers are already selling Tesla Tequila for $500-$1000 on eBay