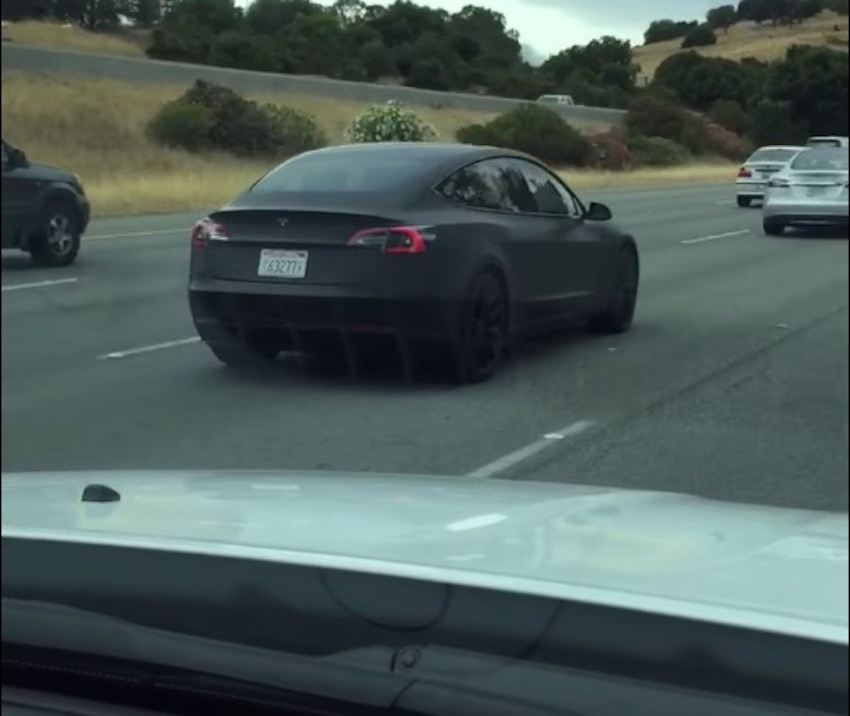 The man behind one of the most prominent anti-Tesla accounts on Twitter, @skabooshka, has been issued a temporary restraining order after allegedly trying to cause an accident during a Model 3 test vehicle’s Navigate on Autopilot demonstration. The noted TSLAQ member reportedly drove so recklessly that his vehicle ended up triggering the Model 3’s crash emergency avoidance maneuver.

The temporary restraining order was granted by the Alameda County Superior Court in CA on Friday, though it is still unknown if the restraining order has been served. In its filing, Tesla claimed that California resident Randeep Hothi, the man allegedly behind the TSLAQ @skabooshka account on Twitter, had “stalked, harassed, and endangered” three employees who were driving a Model 3 in the Bay Area. The electric car maker noted that this was not the first time that the noted short committed acts against the company, as he also reportedly injured a member of Tesla’s security personnel when he was caught trespassing on company property.

Tesla explains its request for a restraining order as follows (credit to Twitter user Nafnlaus for providing screenshots of the documents). The following are excerpts from Tesla’s restraining order.

Respondent has a history of trespassing at Tesla’s facilities, unlawfully taking photographs and video to post on his Twitter account, and other misconduct, as explained in the Leslie Declaration. However, in recent months, Respondent’s conduct has escalated and has resulted in violent and intimidating confrontations with Tesla employees.

In an incident in February 2019, Respondent hit Tesla’s security employee Tyler James with his car as Mr. James approached Respondent to ask him to leave Tesla’s private property. Mr. Tyler suffered minor injuries. The Respondent did not stop and fled the scene. The Fremont Police Department were called and arrived on the scene. The Department later attempted to issue Respondent a warning notice of trespass, but was unsuccessful because Respondent has avoided and been uncooperative in meeting with Fremont police officers.

More recently, on April 16, 2019, Respondent stalked, harassed, and endangered (three Tesla employees) who were driving on the highway in a Tesla-owned Model 3 vehicle bearing manufacturer plates and mounted with camera equipment. In particular, Responded pursued these employees on the public highway for about 35 minutes, variously driving ahead of, beside, and behind them, and swerving dangerously close to the vehicle. Respondent swerved so close to the side of the Tesla that the vehicle’s side-collision (crash) avoidance safety feature was triggered to engage an emergency maneuver to avoid the collision.

These employees had no prior knowledge of Respondent’s interactions with Tesla, but it appeared that Respondent was trying to interfere with their drive, and each feared that Respondent’s road conduct would cause a collision and injure them. Fearing for his safety and for the safety of the other passengers in the Model 3 (a Tesla employee) called the San Francisco Police Department at that time. However, because no officers were in the area, (the Tesla employee) ultimately did not request that an officer be sent to their location.

On April 22, 2019, Tesla will host an event at its headquarters at 3500 Deer Creek Road, Palo Alto, during which Tesla employees will be demonstrating vehicle functionality in manufacturer-plated vehicles on nearby roads. Respondent has expressed interest in this event on Twitter, and his Twitter followers have encouraged him to try to follow and interfere with these drives. Respondent is a vocal Tesla detractor, claims to be a Tesla short-seller, and tweets extensively about his desire to see Tesla (and its Autopilot technology) fail. To ensure the safety of Tesla employees and the public, temporary protection is needed, on April 22,2019, for any Tesla employee driving a Tesla vehicle with manufacturer plates within 5 miles of Tesla’s headquarters at 3500 Deer Creek Road, Palo Alto, California.

It should be noted that @skabooshka’s actions mentioned by Tesla in its restraining order disturbingly mirror some of the suggestions proposed by the TSLAQ community when the noted bear posted images of the company’s Model 3 test car on Twitter. Among these suggestions include braking in front of Tesla’s test vehicles, as well as intentionally swerving into the electric cars’ lane to ensure that the company’s demonstrations are authentic. Other Tesla bears also joked that it would be amusing if the Model 3 crashed.

The Tesla critic’s reckless actions seemed to have stemmed from a particular focus on Tesla’s upcoming Autonomy Investor Day on April 22, where the electric car maker is expected to give investors a deep dive into its full self-driving initiatives, including its custom Hardware 3 computer. Test rides on vehicles equipped with unreleased features of Autopilot and the Full Self-Driving suite are also expected to be held in the event.

Neither Tesla nor Hothi have responded to requests for comment to media publications such as The Verge, though the @skabooshka Twitter account boldly declared on Saturday post that “I will not rest. This is my promise. Tesla is a zero. @elonmusk will go to prison.” Elon Musk, for his part, noted on Twitter that the actions of the noted Tesla bear was something that he has never seen before.