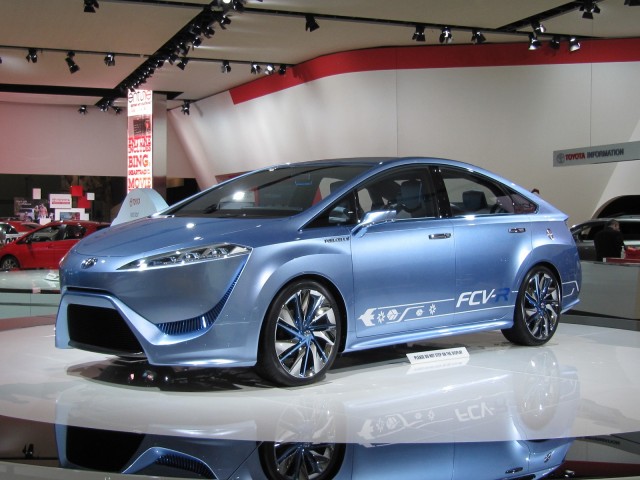 Toyota’s upcoming fuel-cell powered car will be priced roughly in line with the Tesla Model S, and deliver around 300 miles on a full tank of hydrogen, the company has revealed, ahead of the FCV-R-based vehicle’s debut at the Tokyo Motor Show later this year. The new car, which may be launched under Toyota’s own brand or as a Lexus, will cost in the neighborhood of $50,000 “depending on how big your neighborhood is” US advanced product development VP Chris Hostetter said, Bloomberg reports, with Toyota targeting something “price competitive” with Tesla’s sedan.

The Model S kicks off at $69,900, before any federal tax credits are applied. The start-up, founded by Elon Musk, originally offered a cheaper version, at around $52,400 after credits, but axed the model after discovering that only 4-percent of buyers opted for it in favor of more expensive versions with greater range.

These latest numbers from Toyota are more vague than the Japanese company has been in previous months about the fuel-cell vehicle. Back in May, Toyota said that it would be priced at $50,000 and that it expected to sell around 11,000 each year, as well as suggesting it would be sold as a Lexus.

Now, though, the company declines to forecast sales, and says that it has not finalized model or branding. However, Toyota now says to expect the final decision in time for the Tokyo Motor Show in November 2013, with the production vehicle potentially hitting forecourts as early as 2014 as a 2015-model-year car.

Nonetheless, despite Toyota’s – somewhat tempered – enthusiasm, fuel-cells are not universally acclaimed. The technology uses hydrogen, stored at high pressure in tanks usually under the trunk or rear seats, that is passed through a stack of polymer electrolyte membranes coated with catalyst layers: each produces under one volt, but given sufficient density can output sufficient energy to power the car.

The advantages to fuel-cells, advocates say, are that they only emit oxygen as a waste product, and can be fueled on hydrogen sourced from water put through an electrolysis process. However, critics point to the fact that, in actuality, most commercial hydrogen is produced from natural gas, undermining some of its eco-friendly credentials. There’s also a requirement for power to actually compress the gas – in the case of Toyota’s FCV-R concept, which the production car will be based on, to 690x normal atmospheric pressure – into the car’s tank.

Perhaps Toyota’s biggest challenge – and one which Elon Musk has highlighted – is infrastructure: so far, although there are a few hydrogen refueling stations in the US, they’re sparse. Unlike an EV, the FCV-R cannot simply be plugged into a regular power outlet for a straightforward (if slow) top-up. Meanwhile, Tesla pushes ahead with its Supercharger network, as well as flirting with even faster battery-replacement systems.

One possibility is that the commercial car will see a markedly staggered release, likely focusing on California – where “hundreds” of fuel-cell vehicles are already in operation, and the highest density of hydrogen refueling stations exist – before feasibility for the rest of the country is ascertained.