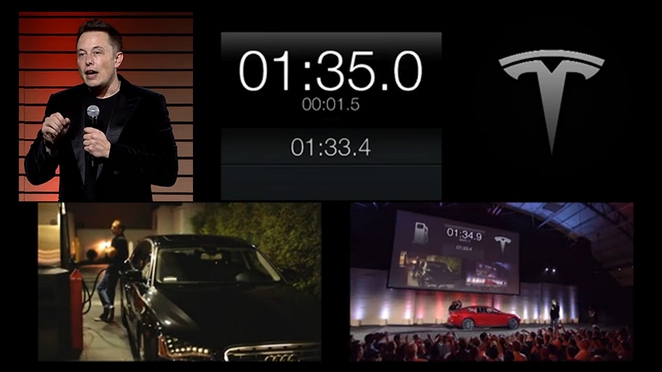 Tesla will set up automated stations later this year that the electric-car company says can remove a spent battery pack and install a fresh one in less than two minutes.

On a stage Thursday night surrounded by Tesla investors and enthusiasts, CEO Elon Musk showed the robotic system in action on two Model S cars while a camera crew simultaneously filmed a driver filling up an Audi A8 at a gas station. The Audi, which required about 23 gallons of fuel, took roughly four minutes to refuel, or a minute more than the time required to swap the batteries on the two Model S sedans.

While it was hardly a scientific experiment, Musk said it would take 90 seconds from start to finish, and the process – which uses equipment similar to that used at the company’s Fremont, Calif., factory – was barely noticeable aside from watching the car’s suspension rise and fall from the battery’s weight.

Once the driver parked the car over a trap door, automated controls unbolted the battery from the undercarriage, slipped it below the stage floor and bolted in a new battery, all without the driver having to exit the vehicle.

The idea behind the swaps, Tesla said, was to “give people a second choice” to recharge.

“Now they can charge for free or do a battery swap for a cost,” Tesla spokeswoman Alexis Georgeson told MSN Autos.

Drivers will pay between $60 and $80 for a battery swap, or whatever the local equivalent is for 15 gallons of premium gasoline, the company said. Tesla will let Model S owners swap as many times as they want, although it will require them to pay the difference in warranty and age should they swap into a newer battery.

Tesla did not reveal details, but told MSN Autos it would charge drivers a set amount per kilowatt-hour if they decide to keep the battery indefinitely, depending on how much capacity their original battery has lost. Eventually, when the system is filled with used batteries, owners may be able to receive credits if they use an older pack.

Tesla already has eight Supercharger fast-charging stations that allow Model S owners to recharge their battery pack by up to 80 percent in about 30 minutes, at no cost. The new battery-swap stations will be added to existing fast-charge stations, starting in California later this year along Interstate 5 from San Francisco to Los Angeles, and later along the Boston to Washington, D.C., corridor, Tesla said. No attendants will be required, and the entire system – save for some storage for the 50 new battery packs the company plans to have at each station – will be done underground. No reservations will be needed.

Battery swapping has long been a hot idea in the electric-car industry, although no company has been successful with it. The Israeli company Better Place was one of the first to install large-scale battery-swapping stations, but it went bankrupt last month. Fisker Automotive, another failed company that used to sell the Karma plug-in hybrid, had designed its battery packs to be “hot swappable” in less than 30 minutes, but it is in bankruptcy court searching for a potential buyer.

Europeans have adopted a simpler alternative whereby an electric car’s batteries are leased from the automaker and replaced for a reduced cost at the owner’s discretion. Smart, Renault and Nissan have offered such programs, which lowers the car’s sticker price dramatically but requires the owner to enter a multiyear contract.

Earlier Friday, Nissan said it would offer a battery leasing program for all U.S. Leaf owners by mid-2014 for $100 per month and would, per its warranty, replace the battery if the capacity drops below 70 percent over five years or 60,000 miles.