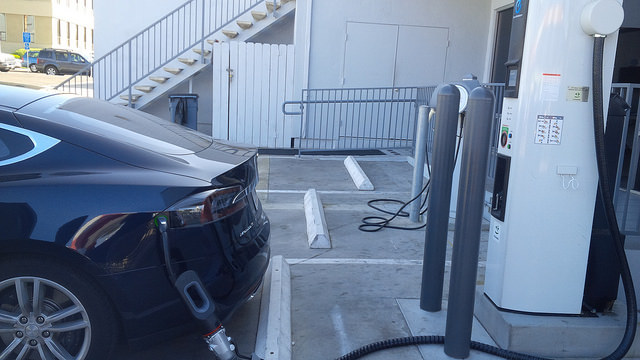 As part of its settlement with federal and state regulators over its diesel emissions cheating scandal, Volkswagen has agreed to invest $2 billion in charging infrastructure over the next 10 years. The money is supposed to come in chunks of  $500 million every 30 months. Volkswagen is largely free to decide how and where to spend the money, but a good portion of it will be spent in California, the state with the highest concentration of electric cars.

According to Automotive News, the money may be used for EV charging stations and hydrogen fuel stations, brand neutral ad campaigns to boost awareness of EVs, or zero emission car sharing and ride hailing programs. Some see this as the answer to the chicken or egg dilemma that has plagued electric car sales for the past 6 years. People don’t want to buy a car that can’t be recharged conveniently and companies don’t want to invest in charging infrastructure if there aren’t enough electric cars in use to justify the cost.

Nissan has applauded the deal, saying the money VW invests could provide “much needed” funding to EV infrastructure. It urges VW and regulators to put a priority on installing DC fast chargers. $1 billion would be enough to pay for the purchase and installation of 10,000 of those, according to the Rocky Mountain Institute. Nissan also said the projects should be coordinated at a national level to avoid a “patchwork” of initiatives steered by individual states or cities.

Last week, the Obama administration announced a plan to expand the EV charging infrastructure in the US that would create charging corridors on 48 interstate highways spanning nearly 25,000 miles in 35 states. At a minimum, there would be one charging station every 50 miles along major routes. The proposal would require an alliance of states, utilities, charging companies, and automakers. General Motors, BMW, and Nissan have agreed to cooperate to bring the plan to fruition.

“This could be a very big moment in time where we see a shift from internal combustion engine vehicles to electric vehicles,” said Roland Hwang, transportation director at the Natural Resources Defense Council (NRDC). “This could actually be a real game changer.”

When there are two billion dollars on the table, everyone will be anxious to grab a piece of the pie for themselves. Volkswagen is not being entirely altruistic by agreeing to do this. Yes, its investment may benefit its competitors but it will also help Volkswagen sell its own electric cars in America. The company is in the midst of a major pivot away from diesel powered cars to electrics. The money it pays out to settle emissions cheating claims could ultimately work to its advantage.

ChargePoint, the largest private charging network in America, is one of those not pleased with the terms of the deal. It says pumping all that money into charging infrastructure  “threatens to destroy the competitive market for ZEV infrastructure” and could create a monopoly for VW. Two Republican lawmakers raised similar concerns in a letter to the EPA last week.

NRDC’s Hwang agrees that the settlement money must be used appropriately. “It’s going to be incumbent upon both the Air Resources Board and the EPA to ensure that VW is investing their money wisely in a way which benefits the entire electric vehicle market and not somehow tuned to assist VW’s business plan.” Expect some wrangling over who gets what to continue.