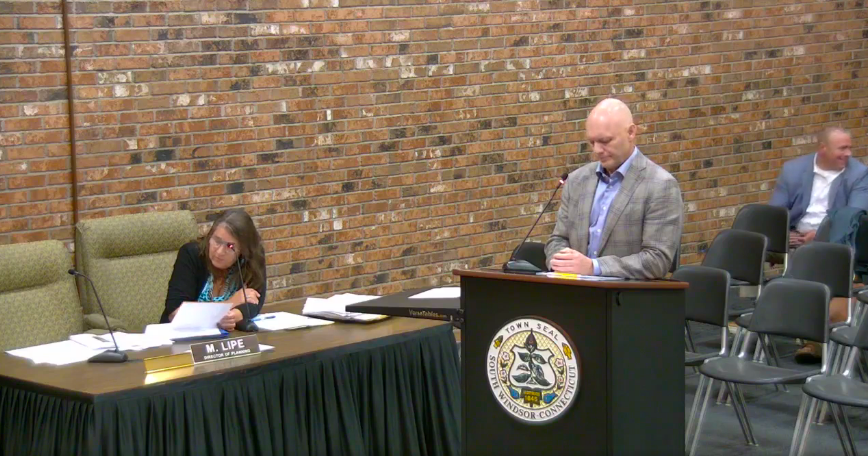 A Connecticut dealership employee  said at a planning and zoning meeting that “direct sales EVs like Tesla are expensive luxury vehicles and they are a very small percentage of the vehicles sold.” The dealership employee who made that claim works for Hoffman Auto Group.

This is a follow-up to our earlier report that Tesla cut ties with South Windsor after siding with the local dealerships.

Tesla was looking to purchase a new location for a new service center and gallery. In this area, Tesla would complement stores such as Apple. All Tesla would need the town to do is adjust the zoning laws to allow car sales and service.

The South Windsor, CT  Facebook page shared a live stream of the meeting and you can watch the replay here.

Tyrrell Dabrowski, sales director at Hoffman Auto Group could be seen laughing at around 1:30:10 which is when the statement about Hoffman suing towns was read aloud.

He also spoke beginning at 1:58 into the meeting. In his speech, he claimed that Tesla owners can’t get good service. I’m not sure if he was boasting or actually taking himself seriously about this since Hoffman Auto Group is blocking Tesla from serving its customers.

“The Hoffman Auto Group, you know, we’re committed to defending the dealer franchise system because it provides the consumers with benefits and protections.”

Dabrowski added that the dealer franchise system “keeps prices low by fostering fair and healthy competition on a level playing field. Direct sales by manufacturers is not necessary for the rapid introduction of EVs in the State of Connecticut. Direct sales EVs like Tesla are expensive luxury vehicles and they are a very small percentage of the vehicles sold.”

Mitchell Sealing Ford testified that Tesla is terrible and illegal. And the Connecticut Automotive Retailers Association claimed that Tesla is trying to sell vehicles in South Windsor which is illegal.

Unfortunately for Tesla, the change was voted down and the location is dead. It’s another win for dealerships–especially those who are spreading misinformation.

The claim that direct sales EVs like Tesla are only luxury cars and make up a small percentage of sales is highly misleading.

Tesla is not only the global EV leader, but during the first half of 2022 alone, Tesla delivered 564,000 vehicles which represented a growth increase of 27% year-over-year.

During Tesla’s Q2 2022 earnings call, Elon Musk said that he is confident that Tesla would be able to get to 5,000 cars a week in Austin and Berlin by the end of this year.

“There’s always a lot of uncertainty like the production looks like S-curve, and that intermediate part of S-curve the difficult to bridge that with high certainty. But the end part of the S-curve, you can say, I think you can have a lot more certainty.”

Statement from Tesla Owners of Connecticut

The Tesla Owners Club of Connecticut shared the following statement with me in an email:

“Unfortunately, once again Tesla was kicked to the curb. Legacy dealerships have an awful reputation. South Windsor didn’t want to open up pandora’s box to any dealership coming into this beautiful part of their town. “

“It was painful to listen to the dealer’s disparaging testimony. Their backward thinking and anti-competitive remarks will lead them to bankruptcy eventually. “

When I wrote for CleanTechnica, I extensively covered the ongoing drama that Hoffman Auto Group caused.