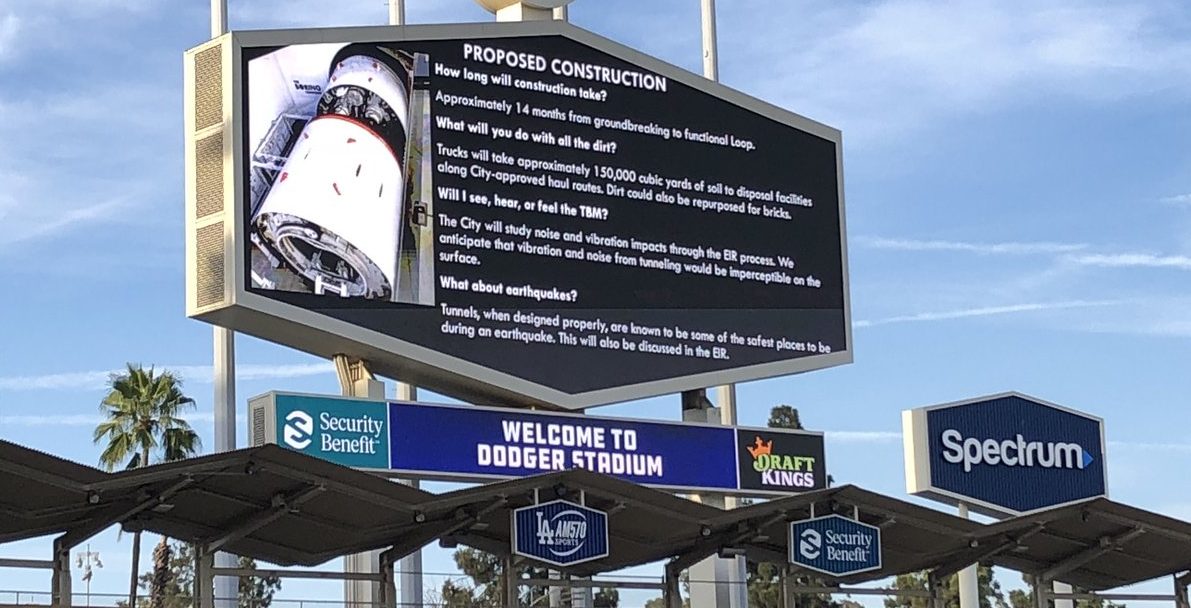 In a rather bizarre turn of events, Elon Musk is now being accused of astroturfing after three SpaceX employees spoke in favor of The Boring Company’s proposed Dugout Loop project for Los Angeles. The Boring Company held its public review at the Dodgers Stadium yesterday, where it presented the concept of its high-speed tunnel system to residents in the area. Only around 50 people attended the event, and a handful opted to express their support for the project.

Independent filmmaker Erin Faulk, who goes by the @erinscafe handle on Twitter, attended The Boring Company’s public hearing. In a series of Twitter posts, Faulk pointed out the public hearing’s weak turnout, while also expressing her doubts about the proposed tunnel system. Faulk summarized her thoughts about the project in a statement to CNET.

“I thought it sounded kind of silly before, but now I’m convinced it’s ridiculous. The desperate attempts to show how it’s going to help people in Los Angeles are kind of transparent. It has such a narrow scope and use,” she said.

The independent filmmaker also discovered that several individuals who spoke in favor of the Boring Company’s proposed Dugout Loop were actually employees of SpaceX. Among these were Hailey Cockrum, a Materials Planner, and Chris Charhut, a Process Development Engineer. This connection with Elon Musk instantly incited controversy among members of the Twitterverse, some of whom accused Musk of astroturfing (compensating a group of individuals to give the impression that a project, idea, or person is enjoying widespread support) the public hearing. Being the controversy magnet that Musk’s name has unfortunately become as of late, it is somewhat unsurprising to see accusations of astroturfing being thrown his way.

There is no way Elon didn’t pay these people wtf is happening. pic.twitter.com/qBB4xJwzCn

IS THIS REAL LIFE pic.twitter.com/TC11INnFEO

While it is true that SpaceX employees did speak on the Boring Company’s public hearing, there is one little problem with the astroturfing accusation. The SpaceX employees who showed up and spoke at the event were LA residents. Thus, they were at Dodgers Stadium as private citizens and had every right to air their support for the Dugout Loop. The Boring Company provided a statement about the event through its official Twitter account, poking a little fun at the astroturfing accusation.

SpaceX employees spoke – not with our knowledge or at our urging – to offer support as private citizens. We‘d have asked them to identify themselves to avoid confusion if we had known. SpaceX has 5k employees in LA – if the goal was to astroturf, we’d have done a much better job!

The Dugout Loop and the Boring company might be getting mocked and bashed on social media after its recent public review, but the proposed project is actually getting some support from LA Mayor Eric Garcetti, who described the project as a “great example of public-private partnership.” Dodgers CFO Tucker Kain also aired his support for the project, stating that the team is entirely behind initiatives that would ultimately make it easier for baseball fans to get to a game.

The proposed Dugout Loop will begin at the Dodger Stadium property and run under Vin Scully Avenue and Sunset Boulevard, with starting points being set up at either Vermont/Sunset, Vermont/Santa Monica or Vermont/Beverly. The Boring Company aims to utilize the Dugout Loop as a support for the city’s Metro Red Line stations.

The tunneling startup would be using its Loop transport concept for the LA tunnel system. The Loop system uses electric pods which are designed to carry up to 16 people at a time. The Boring Company expects to charge $1 per person for every ride in the Loop system. Construction for the Dugout Loop is estimated to take about 14 months to complete. The project is also 100% privately funded, and thus, will be built at no expense to the city’s residents.

The Dugout Loop is, if any, a prototype project that just happens to have public utility as a pleasant side effect. The tunnel, after all, is just one of the Boring Company’s projects across the United States. In Chicago alone, the company is involved in a high-profile project that would see the tunneling startup attempt to develop a high-speed transport system connecting downtown Chicago to O’Hare airport.

The Los Angeles Bureau of Engineering (LABOE) posted a document covering some of the finer details of Boring Company’s proposed Dugout Loop project, which could be accessed here.