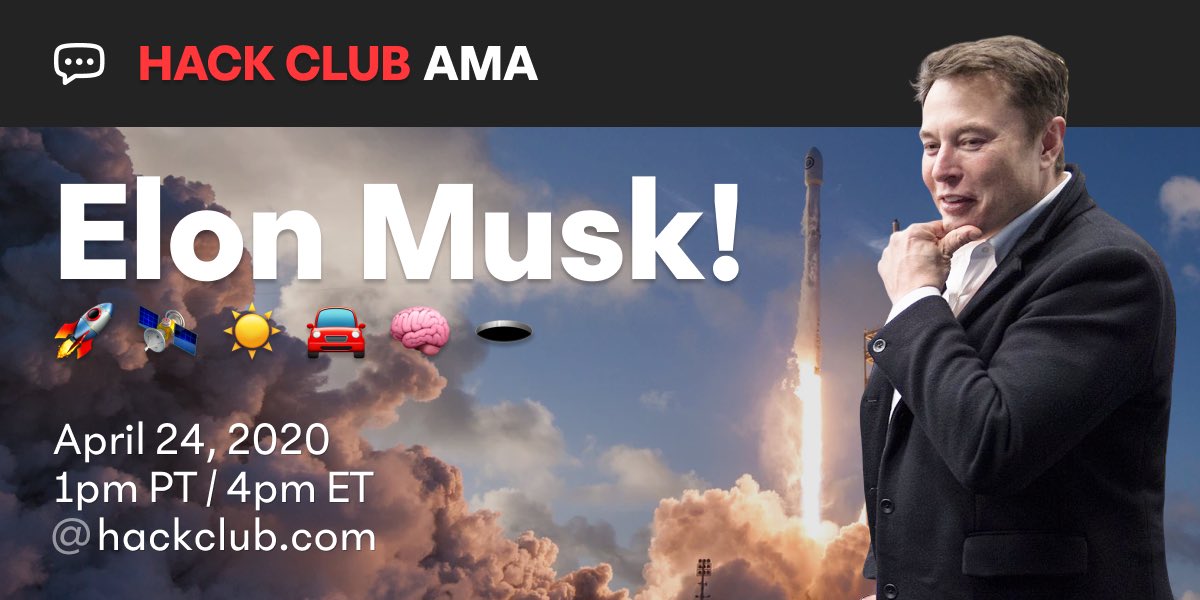 Tesla CEO Elon Musk will join the Hack Club this Friday, April 24 for an “Ask Me Anything” session at 1 PM PT or 4 PM ET.

The Hack Club is a group dedicated to helping high school students learn coding “through tinkering and building projects.” The outlet takes place at high schools across the United States, where students work at their own pace to develop problem-solving skills. Eventually, the students work toward developing applications, websites, and games, according to the club’s website.

The meeting will be available on a live stream twenty minutes before the club’s weekly meeting commences. Musk’s participation in the event is an excellent opportunity for some of today’s brightest minds to collaborate on ideas and broaden educational horizons.

We’re excited to announce that @ElonMusk is doing an AMA this Friday at 1pm PT / 4pm ET with Hack Club students! 🚀🛰☀️🚘🧠🕳

Follow us at @hackclub we'll post a link to the livestream 20 min before the AMA starts so you can tune in! pic.twitter.com/y3CCnDaVsa

However, the meeting is much more than a meet and greet between today’s youth and perhaps the most interesting man in the automotive and aerospace industries today. Musk extended an invitation for students to attempt to hack SpaceX’s Starlink and the Tesla Mothership server. “In advance of this, please try to hack Starlink & Tesla Mothership,” Musk added.

In advance of this, please try to hack Starlink & Tesla Mothership! https://t.co/msdv8Dq2BN

A lofty challenge, Musk offered the hacking opportunities to students just like he has to others in the past. In February 2020, Musk announced an AI Party/hackathon at his house, where Tesla’s artificial intelligence and Autopilot team would be present to learn techniques that would involve zeroing in on flaws in the company’s systems.

That was not the first time Musk offered a hacking opportunity. Just a month earlier in January, Tesla launched the “Pwn2Own” contest that would award a Model 3 and $500,000 anyone who could break their way into a vehicle’s system. This contest was not only beneficial to a potential hacker with the rewards, but Tesla saw this as an opportunity to understand flaws and vulnerabilities within its car’s cybersecurity systems. A pair of hackers eventually exploited a loose end and wound up, leaving with a Model 3.

With COVID-19 spreading throughout the world, typical high school meetings cannot go on as educational facilities remain closed until further notice. However, Tesla CEO Elon Musk will join the students for a meeting on Friday where he will field any question they have to ask.

The students involved in the Hack Club have the opportunity to pick the mind of one of the most revolutionary engineers and people in the automotive business of the modern era. Perhaps if one can manage to impress Elon enough, they could have the first choice at an internship or career within Tesla’s world-renowned Artificial Intelligence team.