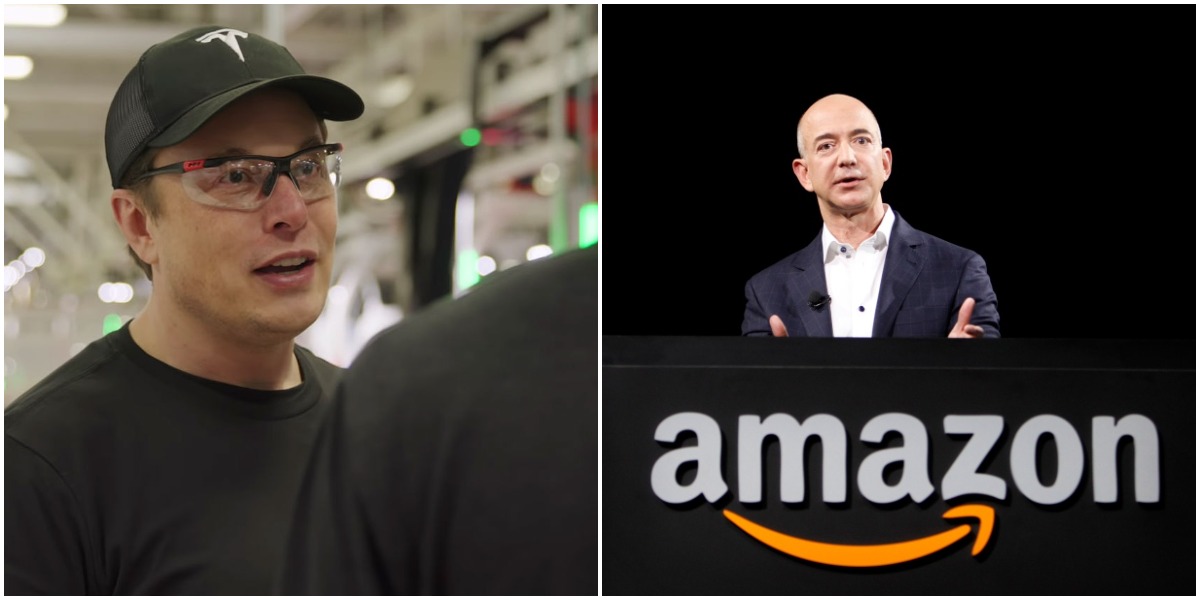 Elon Musk and Jeff Bezos: The Rivalry of the Century (that we are all benefitting from)

Elon Musk and Jeff Bezos have shared an extremely public rivalry throughout the past few years, aiming to one-up each other in space exploration and self-driving cars. The two men, who own the top two positions on Forbes’ Billionaires List, are chomping at the bit to get ahead of one another, and the competition that lies within the Tesla and Amazon CEOs gives the people of Earth all something to benefit from: longevity and innovation.

The two most powerful men in the world in their respective sectors, Bezos being at the helm of the most dominating company in the e-commerce world, and Musk surging forward the acceleration to sustainable energy with Tesla. There is a lot of money, a lot of power, and a lot of reputation at stake, and the rivalry between the two men is mostly comprised of healthy competition to out-do the other. However, the two men share a similarity in their strategy to help humankind move forward, and it lies within their aerospace companies: Musk’s SpaceX and Bezos’ Blue Origin. But it isn’t a competition that has always been healthy and in good spirits. It has often resulted in name-calling and Twitter contradictions, showing that even the two richest men in the world can share a very public rivalry while benefitting the rest of us.

In past years, Musk has been the more successful entrepreneur in the space exploration and self-driving vehicle front, of course. His two companies being Tesla, the largest car company in the world in terms of market cap, and SpaceX, which has been launching satellites for global internet service with Starlink and sending astronauts to the International Space Station on several missions. It is no secret that Musk has an astounding lead over Bezos in those sectors, and he doesn’t have any intention of selling consumer goods, even though he would encourage competition in that market after calling Amazon a monopoly.

Time to break up Amazon. Monopolies are wrong!

But Musk’s lead must leave a small portion of Bezos feeling left out. Musk undoubtedly receives more recognition and more kudos for his work, and he should. He’s made legacy automakers change their strategies moving forward, forcing them to work on all-electric powertrains, and SpaceX has made the possibility of human space travel possible again. Bezos, being the extremely successful person that he is, must thrive off of competition and the work that it takes to make things more efficient and better than anyone else.

In the early 2000s, both Musk and Bezos were struggling entrepreneurs who worked to grow their entities into the world’s biggest and most successful companies. Bezos, who once held an office in a shady part of Seattle above a Chinese food restaurant, had a desk that wasn’t level, and an uneven canvas on the wall that said “amazon.com” in blue spraypaint. He drove a run-of-the-mill sedan and shared an incredible joy for his work, which was then just an online bookstore.

Meanwhile, Musk was fresh out of his sizeable sale of PayPal. He reinvested his money into Tesla, and he was sleeping on the floor of his office building. Showering at the YMCA in Los Angeles, Musk and his brother Kimbal were also subjected to startup life’s genuine struggle: long hours, less-than-luxurious living conditions, and minimal pay.

Fast forward a few years, and the two men are among the most powerful people on Earth thanks to their influence on their respective sectors. But what is really driving things forward between the two men is the competition they share with one another. The constant need to outperform the other person is evident, and the two men’s based opinions constantly encourage the other one to work a little harder.

In the end, the personal rivalry has benefitted us all. SpaceX and Blue Origin are both doing things to accelerate the possibility of normalized space travel. Amazon is making consumer goods easy to obtain, and Tesla is making electric cars fun, fast, and affordable.

Elon Musk and Jeff Bezos: The Rivalry of the Century (that we are all benefitting from)