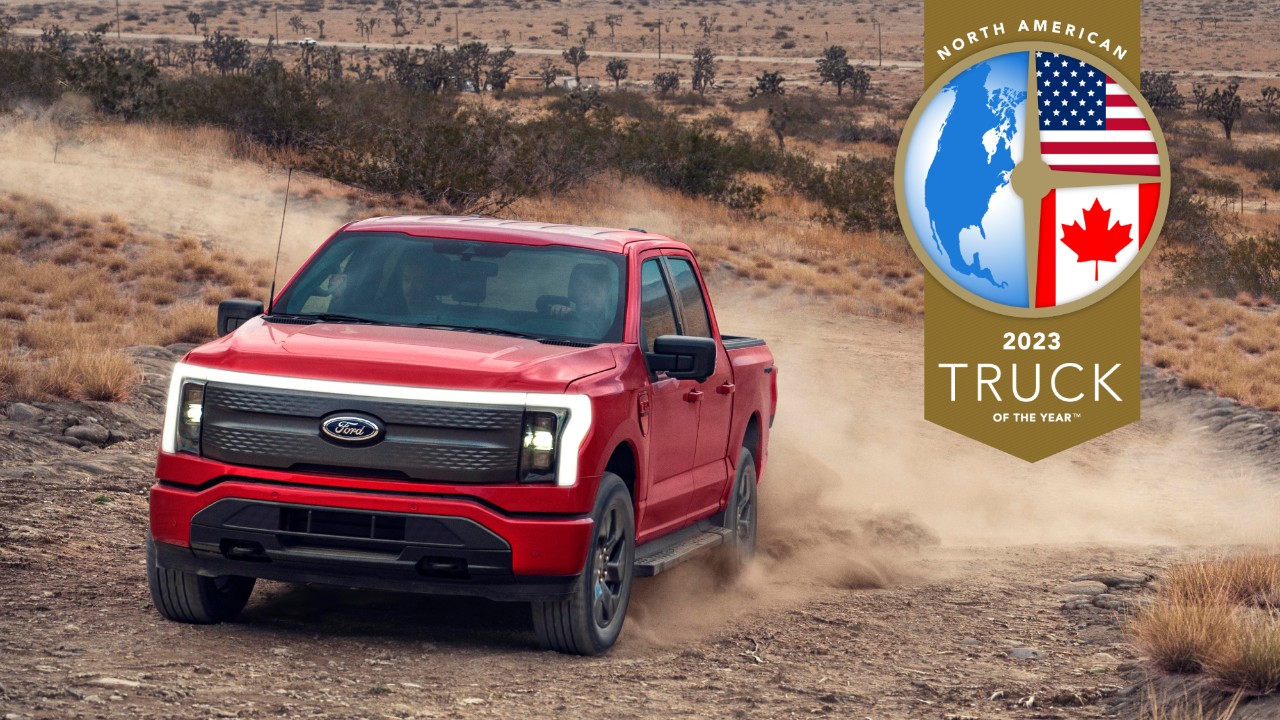 The Ford F150 Lightning has been named the North American Truck of the Year, while traditional competitors Dodge and GM remain absent from the electric truck market.

The completion for North America’s Truck of the Year is always tight, requiring jurors to ask questions like, which truck is the most technically advanced, price competitive, or potentially industry-defining? This year, they decided on the Ford F150 Lightning. And while the Rivian R1T gave the Blue Oval a run for its money this year, Ford’s more price-competitive and higher production volume vehicle was a winner in the eyes of NACTOY, the awarding organization. But more notable than Rivian’s competition was the utter lack of competition from the other big three brands that traditionally compete in the pickup space.

The message from Ford CEO Jim Farley regarding the recent award is clear; more trucks, faster. “Earning North America’s Truck of the Year is huge for the team that has been working so hard to build and deliver as many Lightnings as possible, as quickly as possible,” said Mr. Farley. “We’re moving fast to further ramp production to a 150,000 run rate this fall and pushing to improve every aspect of this truck.”

While production numbers of the recently released Ford F150 Lightning remained significantly lower than customers (and likely executives) would have liked, the vehicle still helped Ford become the #2 EV brand in the U.S. behind Tesla. And with significant investments in upcoming production, the brand is well-positioned to take more market share in the new year.

As for why NACTOY chose the F150 Lighting, Karl Brauer, NACTOY juror and freelance journalist for Forbes, outlined a few specific reasons for his choice. “Ford’s effort to create an all-electric F-150 is remarkable because it combines the standard truck’s dimensions, which means it retains massive aftermarket support, with substantial upgrades to areas like storage and mobile power support. It’s really the best of all worlds…”

As for the traditional competitors, they remain either months or years away. General Motors plans to launch its hotly anticipated GMC Denali EV in early 2024 alongside its other electric truck entry, the Chevy Silverado EV, which will be coming at the end of this year. As for Dodge, while the company’s new RAM Revolution has finally been revealed and looks ready to take on the likes of the other big three, it will also be coming in 2024.

Ford has caught its traditional rivals unprepared, and as long as they have such a wide birth in the market, expect the company to take advantage of it. And while I and many others are excited for the Tesla Cybertruck, Chevy Silverado EV, and many other EVs coming in 2023, this is a well-deserved award for Ford.