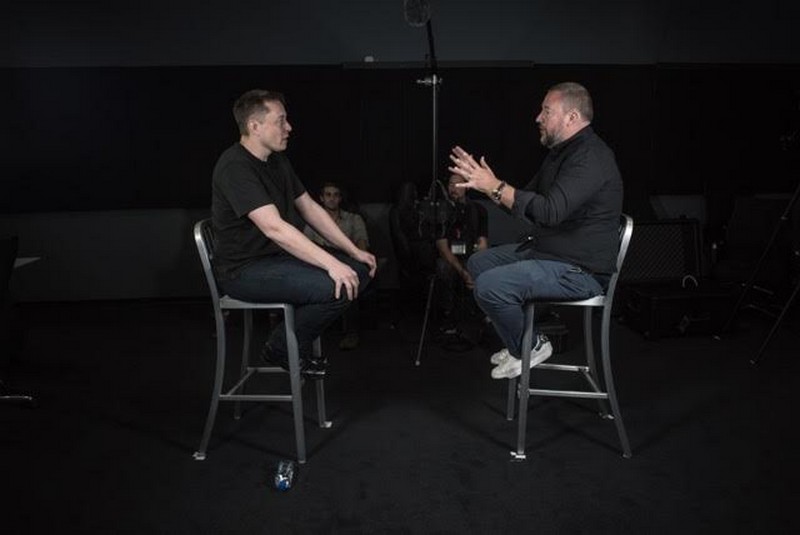 Elon Musk will be featured April 15 on HBO’s weekly program VICE. The topic this week is “The Future of Energy”. VICE founder Shane Smith sits down with Tesla CEO Elon Musk to discuss the future of energy in HBO’s compelling documentary-TV series, VICE. The interview — set to air tomorrow night on HBO at 11 pm eastern time — was filmed in November of last year at Tesla’s Design Center in Hawthorne, CA, recent home to the Model 3 unveiling.

Musk takes Smith for a ride in the Model S before discussing Tesla’s journey to changing the world’s perception on electric vehicles. He tells Smith, “If you had a car that was long range but it didn’t look good and it wasn’t fun and it didn’t handle properly and it didn’t have great electronics and all these important attributes that people value…..we had to change the perception of an electric car. We wanted an electric car to be something that was fun and sexy, not something that was dull and boring like a golf cart.”

Renaissance man that he is, Musk is involved with more than just automobiles. Tesla is also building batteries to store electrical power. Some will be used to balance the electrical grid while others will be used to replace the grid all together. The basic storage unit in the Tesla Powerpack is 100 kWh — slightly larger than the size of the current 90 kWh battery found in the top-of-the-line Model S and Model X. Each Powerpack cabinet contains 5 storage units making for a total capacity of 500 kWh.

Musk tells Smith that it will take about one billion Powerpacks to store all the power the world needs. While that may seem like a staggering number to most people, Elon says it is only equivalent to how many vehicles there are in the world today. Given 15 or 20 years, he thinks Tesla could build enough Powerpacks to meet that need.

Along with his cousins Lyndon and Peter Rive, Musk also found SolarCity in 1993. Today, the company is the largest installer of residential and commercial rooftop solar systems. Just last week, Elon tweeted that the combined output of all SolarCity installations is enough to recharge every Tesla automobile made to date.

Musk summed up his dedication to zero emissions cars and renewable energy by telling Smith the future is his future as well. He has no interest in being the captain of a sinking ship.

Tune in Friday at 11 pm eastern to see the entire “The Future of Energy” episode with Elon Musk on VICE on HBO.