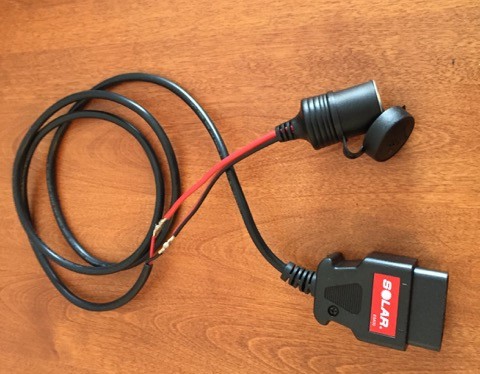 The finished product plugs directly into the OBD-II port of the Model S for a clean and hidden look.

Finding a 12V power supply on the Tesla Model S could be a daunting task considering the variety of methods available for tapping into the vehicle’s wiring system. Some more elegant than others. My most recent Tesla dash cam project had me searching for a constant source of power that’s easy to tap yet removable when needed.

Personal electronic devices and gadgets used within a car usually require a switched power source that powers devices only when the vehicle is on. Case in point is your cell phone (charging while driving) or a radar detector which only requires power when you’re actually in the car and driving.

However there are times when having access to a constant 12V power source, also known as unswitched power, could come in handy. One example is having an always-on dash cam that acts as a security camera when the car is parked and unattended. It’s the perfect gadget to capture hit and runs and in this case you’ll need a constant supply of power for the camera regardless of whether the car is on or off. There are four ways in which you can tap into Tesla Model S 12V battery and power your electronic devices. I wanted access to constant 12 power source for my dash cam but at the same time I wanted to ensure that the implementation was 100% reversible. It had to be a simple enough Tesla DIY project that didn’t involve cutting of existing wires or result in a permanent modification. Enter the OBD-II connector.

Vehicles sold in the US and across much of the world are mandated to have an on-board diagnostics connector (OBD-II). The purpose being it’s a way for service technicians to plug directly into the vehicle’s computer to help diagnose errors and faults within the engine.

Although Tesla has the ability to diagnose the vehicle remotely, they were still required to provide an OBD-II connector on the Model S.

The OBD-II connector on the Model S is located on the drivers side just above the area around the dead pedal. I found this to be the best source for unswitched 12V power.

NOTE: The following steps are to be performed at your own risk. The DIY project is intended to be non-invasive and safe, but it’s also using a component of the Model S for something it was not intended to do. Possibilities of draining your 12V battery, short out your OBD-II connector or cause damage exist if performed incorrectly. If you’re looking for a constant 12V power supply for a USB device, you can purchase a OBD-II to USB adapter.

They’re hard to come by and I couldn’t find anyone in the US that made one. But for about $41 delivered you can use the device to obtain a constant USB power supply.

This solution starts with a $12 part available via Amazon. It’s intended for a very different purpose — feeding power back into the OBD-II connector via a male 12V power supply when you’re changing batteries. They call these “OBD Memory Savers”.

One end plugs directly into the OBD-II connector of the Model S however the other end is a male plug which needs to be converted into a female plug. The best way to approach this is to purchase any random adapter with a 12V female end to use as a replacement.

Cut the ends off each adapter and then solder the 12V female end to the OBD-II connector — red to red and black to black. Seal the connection with electrical tape. Here’s my parts list and cost to build a completely removable, non-permanent constant 12V source for my Tesla Model S:

This nifty little solution helped me tap into a constant 12V power supply for my Tesla dash cam project without having to leave a permanent mark, but also do it in under $20. Simple and completely removable. Just keep in mind the note from above – take caution when plugging anything into a constant source of 12V power since you can drain the 12V battery if left unattended.