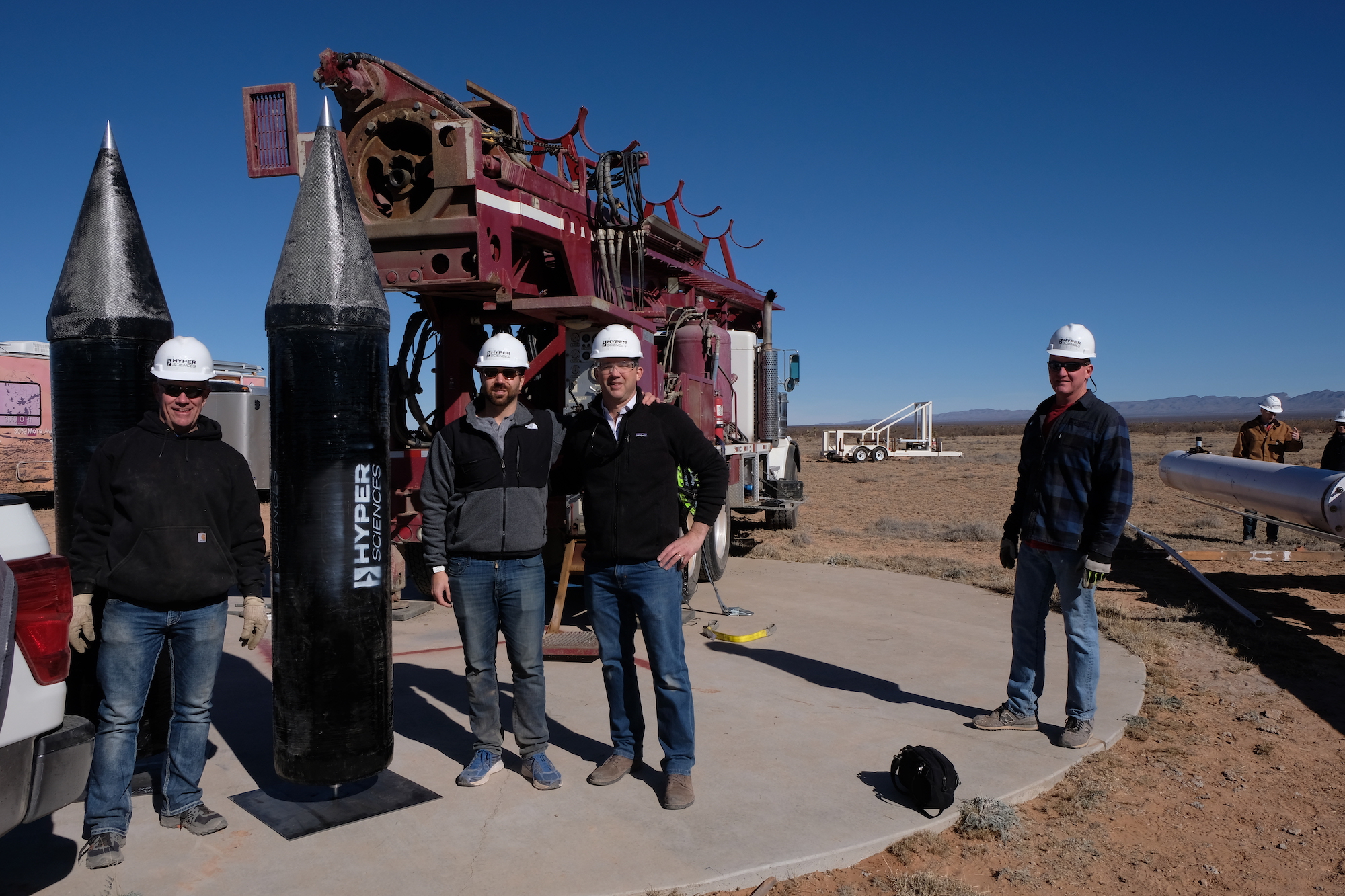 For HyperSciences, geothermal energy builds a path to space

These days, it seems anyone wanting to launch rockets will inevitably be compared to Elon Musk and Jeff Bezos, especially if rocket launching isn’t the only business interest on the agenda. Musk has Tesla plus SpaceX, and Bezos has Amazon plus Blue Origin. Now, meet Mark Russell, a disciple of Bezos and rocket engineer who founded HyperSciences, a drilling company that uses aerospace technology to both quickly extract underground geothermal energy and put payloads into orbit at low cost.

The idea of leveraging Earth’s geothermal energy is not a new concept, but the expense and time required to reach the depth needed have been prohibitively expensive. That’s where HyperSciences comes in.

Russell and his team have developed a low-cost, multi-purpose projectile called the HyperDrone that can accelerate to velocities over five times the speed of sound and pulverize hard rock via their HyperDrill. This will enable tunneling speeds that are 5-10 times quicker than conventional methods, and more importantly, it opens up significant market viability in other industries that could benefit, namely when that acceleration is pointed skyward. NASA has already recognized this potential and is a current investor and major partner of HyperSciences.

Bringing accessible, affordable, and true green energy to the international arena is onely one component in Russell’s overarching goal in life. In a way reminiscent of the founder of another famous digging enterprise, The Boring Company, HyperSciences’ founder has both roots in space exploration and a long-term vision for a paradigm shift in space launch capabilities using the same basic employed in his digging operations. In fact, launching projectiles up was what inspired him to launch them down deep into the ground in the first place.

“I would not have left ‘conventional’ aerospace unless there was a path forward for spaceflight,” Russell told me in a conversation we had about his vision for his company’s inventions beyond Earth’s atmosphere. He was referring to his decision to leave Blue Origin after he’d led their crew capsule and vertical takeoff and landing vehicle development to found HyperSciences. I’d heard that Russell had history with the Bezos-led rocket company, but as a lifelong space nerd, I was very excited to hear the extent of his background in aerospace and how it tied into just about everything about his drilling company.

“I was the black sheep of the family that went into the aerospace arena instead of into mining,” he told me, jokingly, before reminiscing about his amateur astronomy hobby and desire to be an astronaut in his younger days. Russell is the third generation of a family of successful miners from Idaho.

It is Rocket Science

The future HyperSciences founder obtained a master’s degree in Aero Astro Engineering from Stanford University before spending some engineering time at Boeing first, then Kistler Aerospace, where he worked with a man who would eventually become Blue Origin’s first president, Rob Meyerson. Russell made the transition to Jeff Bezos’s space venture himself for a time, but as the company moved more in the direction of becoming a traditional launch provider, he made the decision to circle back around to his family mining days where he’d been considering some underground-type space industry ideas that needed more attention to flesh out.

The result of that return home would eventually lead to the invention of the HyperDrill step-change Russell was looking for to be able to turn his attention skyward again. “My brother and I drilled the deepest holes in America right after I left Blue Origin, and it all seemed like rocket science to me,” he recalled.

So, how does a drill transform into a rocket? While the technology itself is the product of very innovative and intelligent minds, the concept overall is simple. A projectile (or rocket payload, rather) is loaded into a long tube that’s been drilled underground, and then fuel is ignited in the bottom of the tube to propel it at hypersonic speed towards space, a second transfer stage possibly being implemented for orbital entry. The company calls the actual launching device the HyperCore Engine. By essentially separating the fuel and the payload of a rocket, the process of putting things into orbit becomes cheaper, safer, and achievable at a much faster rate of launch than anything even being planned by the likes of SpaceX and Blue Origin.

This kind of technology proposition gained NASA’s interest, and HyperSciences has since won a Phase I innovation award for from the agency, the testing for which was successfully completed at Spaceport America in New Mexico at the end of January this year. With this achievement under their belt, Russell’s long-time spaceflight dreams are really starting to take shape.

Tying the team’s mining and space technology ambitions neatly together, Russell also told me that his time at Blue Origin contributed more than just direct experience with spaceflight development to his hypersonic launch ambitions. Bezos’s “test early, test often” philosophy was directly relevant to a technology involving speeds 3-6 times the speed of sound – frequent flight testing is a must.

“At this point I realized, you really have to change the paradigm, and you need to test an awful lot,” he explained. “I thought to myself, if you want to practice a lot in , what you want to do is find an industry that needs this.” With HyperSciences established and making great progress, Russell’s plan looks to have worked just as he’d imagined. “Every 15 seconds, we’re firing something at hypersonic speeds. Nobody does that. NASA doesn’t do it. Boeing doesn’t do it. But we do it.”

There was yet another aspect to Russell’s plan in developing his technology that I thought was pretty exciting – crowdsourced investment. Unlike SpaceX and Blue Origin where investment isn’t really accessible to day-to-day citizens wanting to be a part of the “next big thing”, HyperSciences’ latest funding round is being hosted by SeedInvest. This approach provides a real ownership opportunity for pretty much anyone excited about things like aerospace and clean energy, and it’s open until March 22, 2019.

As a native space nerd, I also had to prod Russell about taking HyperSciences’ tech to Mars – did he see a place for it there, whether it be for underground geothermal-type energy hunting or habitat digging? Turns out, he was several steps ahead of me. “I think the next bit of space exploration really does need to drill holes,” he said, acknowledging my sentiments about taking the tech off-planet. “In our patents, we have some applications that aren’t terrestrial.” How’s that for forward thinking?

“Hypersonics is not just about space. It’s a brand new way – a brand new engine,” Russell emphasized to me.

The disruptions already caused by Elon Musk in the same arenas HyperSciences is aiming for have made so many inroads where strict boundaries once stood, and it’s very exciting to see another space-driven company come along and want to keep pushing those boundaries into another phase of development all together. Visiting HyperSciences’ SeedInvest page is a great place to learn more details about the company’s plans and the benefits investors can gain by being a part of their future-forward technology.

The video below provides some exciting visuals and information surrounding the aerospace applications for HyperSciences’ technology, as demonstrated for their NASA Phase I funding award.

For HyperSciences, geothermal energy builds a path to space