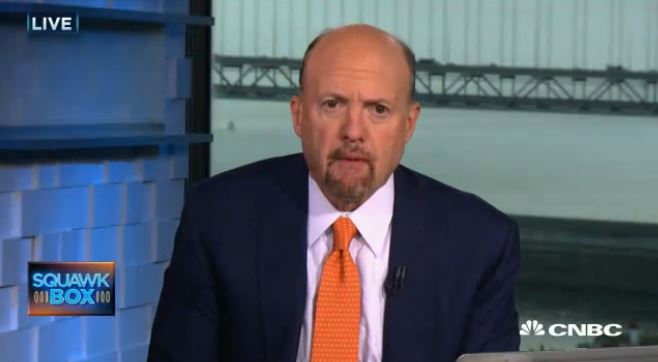 The financial markets reacted with a strong dose of negativity after Tesla announced that it is looking to acquire SolarCity in an all stock deal worth $2.8 billion. Tesla stock was down more than 10% at the end of the trading day on Wednesday. On CNBC’s Squawk Box, analyst Jim Cramer — who is a well known Tesla bear —  said “The Kool-Aid tasted really good in Jonestown before it really hit ya.” He was suggesting that Musk’s gambit should be a wake up call to the Tesla faithful who think Elon walks on water and can do no wrong.

“Tesla was obviously desperate to save SolarCity,” TheStreet’s Jim Cramer said on CNBC’s Squawk on the Street. “SolarCity had an existential crisis, that last quarter was the worst I’ve ever seen,” says Cramer. “The quarter was ‘so bad’ that the analysts themselves were in open rebellion, all I can say is that SolarCity would have gone even lower if he hadn’t made this bid,” Cramer said of Musk.

RBC Capital Markets analyst Joseph Spak did acknowledge that there are a number of synergies that could help both companies, but he thinks  Tesla shareholders are not going to be happy with the arrangement. “We suspect the market will be more skeptical of the strategic rational and the financial/cash flow strain this could add to the TSLA story. By owning the asset, we believe TSLA may be trying the investing partner approach they have taken with shareholders and asking them to stick with them for something they potentially didn’t sign-up for,” Spak said.

Perennial gadfly Bob Lutz was his usual cranky self. On CNBC’s Closing Bell, Lutz riffed further on the Jim Jones theme. “People finally are beginning to figure it out. They’ve drunk the Elon Musk Kool-Aid. They’ve drunk it long enough and nothing’s working,” Lutz saud. “This deal makes zero sense. It’s going to further put a huge amount of financial pressure on Tesla, which is already in financial trouble.”

The unkindest cut of all came from Bill George, a Harvard Business School professor and former chairman of Medtronic. He told Closing Bell, the SolarCity deal was a “bridge too far.” He is doubtful Tesla shareholders will go along with Musk’s plan. “I think he’s going to have a further comeuppance from his shareholders to Tesla in trying to bail out SolarCity. He says he’s an energy company. I mean, being an automobile company is tough enough,” George said.

Musk said in a hastily arranged conference call Wednesday morning that the combination of Tesla Motors and SolarCity would result in a trillion dollar company. “I have no doubt about this – zero. We should have done it sooner.” He said the idea had been discussed with major investors several times over the years. “This idea has been bandied about with some of our largest shareholders, institutional shareholders. Yeah, there have been discussions.”

Musk and his bold financial dealings often polarize investors. Some think Musk can do no wrong. Others think he is a charlatan who bamboozles people with his lofty pronouncements. The proposed purchase of SolarCity is no different. As always in the stock market, “you pays your money and you takes your choice.” No one ever forced anyone to buy shares of Tesla Motors. Most people who have are quite glad they did.