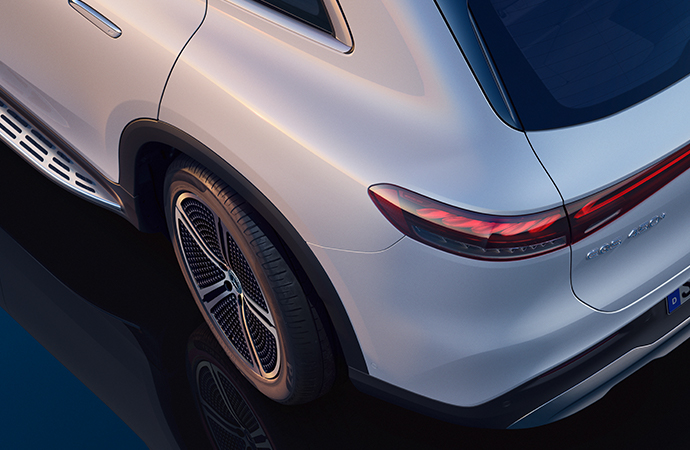 Mercedes Benz’s upcoming EQE SUV has been pictured online ahead of its debut.

Mercedes Benz has been aggressively expanding their electric vehicle offerings. Currently, the German luxury brand offers an extensive list of EVs spread across multiple markets; the Mercedes Benz EQS and EQS SUV, the EQB SUV, the EQA SUV, the EQC SUV, and the EQE Sedan. The brand will introduce the Mercedes EQE SUV to the lineup, and images show the luxury SUV in exquisite detail.

A post from the Spanish Instagram account CocheSpias (Car Spies in English) shows the upcoming SUV’s exterior, a couple of closeups of wheel and tire options, and the famous glowing Mercedes logo.

The post reads, “The wait is over… the first new images of the Mercedes EQE SUV. What do you think?”

Little is currently known about the upcoming SUV; its specifications, availability, or even pricing are yet to be announced. However, these images indicate the brand believes that there is more space in the electric SUV segment. And by looking at Mercedes’ offerings in different markets, it can be hypothesized where the new model will end up.

Currently, the U.S. market lags far behind the European and Chinese markets regarding the number of offerings. China presently sells five different electric Mercedes models, while Europe is treated to six. The U.S., on the other hand, has only three. But with a new Mercedes SUV model, the U.S. could come closer in line to pre-existing lineups in other markets.

Furthermore, despite current inflationary issues, the U.S. is in a far better economic position than other notable economies. Europe has an ever-worsening inflationary issue and mounting energy costs, affecting everyone from manufacturers to consumers. Simultaneously, China is maintaining its zero-COVID policy and battling a collapsing housing market and banking system. This could make the U.S. a very tempting option for an automaker like Mercedes, which already has U.S.-based manufacturing locations.