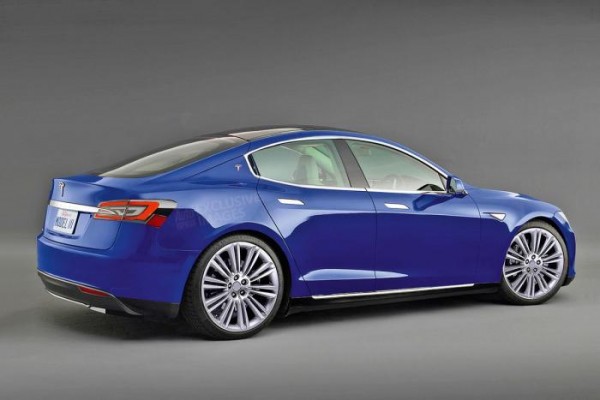 Going on sale as early as 2017, the much awaited “affordable” electric vehicle (EV) from Tesla Motors will be called the Model III. Critics might be tempted to wonder if Tesla ran out of ideas, since after the Roadster, we were introduced to the Model S, then the Model X and now the Model III. We are left to wonder if the next generation will be the one I’ve been personally waiting for, the new Roadster. The question is, what will it be called.

According to Elon Musk, Tesla Motors CEO on AutoExpress:

However, Ford would not let Tesla call the next model, the Model E, and thus killed S E X. Tesla then decided to call it the Model III, “we’ll have three bars to represent it and it’ll be S III X!”.

The Model III will be sexy The Model III will be unveiled sometime in 2016, but would only go on sale by 2017. As we covered in our last Model E / Next-gen article, it will most likely sport an all-new platform, with almost no carry over from the Model S and Model X. The British publication AutoExpress is quick to remind us that the Model III will be the brainchild of Tesla’s new engineering chief Chris Porritt, formerly Aston Martin’s Chief Engineer.

Musk also announced that he planned to set up a research and development center in the United Kingdom.

Model III will compete against BMW and Audi

Musk confirmed that the Model III will sell for around $35,000 and would have a realistic range of over 200 miles. The car will have strong performance which leads us to believe Tesla will not give us a cheap, tuned down version of a Model S. The car should be able to compete with the likes of BMW and Audi, both carmakers eager to jump onto the EV bandwagon.

As much as we love the Model S and the upcoming Model X, little has been said about the Roadster until now. Tesla is planning a battery upgrade that will allow the Roadster to achieve approximately 400 miles in range. According to Musk: “The Roadster had an old generation battery,” he told us. “We’ll upgrade it to a new generation battery pack and it should have a range of about 400 miles, which will allow you to drive from LA to San Francisco non-stop.”

Whether we call it the Next-gen, the Model E or now the tongue-in-cheek Model III, all four cars, the Tesla Roadster, Model S, Model X and now Model III are shaping to have their definitive place in the book of automotive history as game changers.