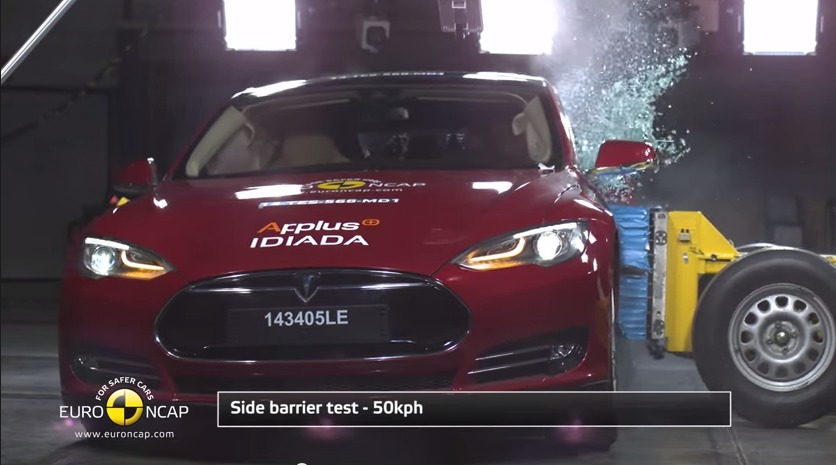 The organization ranked the Model S based on safety for the following categories: adult occupant, child occupant, pedestrian, and safety assist features. Euro NCAP scored the Model S with exceptionally high scores for its side impact protection however frontal impact dummy kinematics indicated that head protection did not fare. Testing indicated that there was insufficient inflation in the airbag to prevent the head from flattening out the airbag and coming in contact with the fascia.

According to Euro NCAP, “Tesla investigated the issue and found an error in the airbag calibration software supplied by the vendor. Euro NCAP has been informed that this error has been corrected in all vehicles supplied to customers.”

See the full results of the Tesla Model S safety and crash testing below.

The passenger compartment remained stable in the frontal impact. Readings from the passenger dummy indicated good protection of all body areas except the head. Analysis of the dummy kinematics showed that the airbag on the passenger side had ‘bottomed out’ i.e. there was insufficient inflation to prevent the head flattening the airbag and coming into contact with the facia, through the airbag material. Although the calculated injury parameters were not hazardous, protection of the passenger head was penalised and rated as adequate. Dummy readings indicated good protection of the knees and femurs of the driver and passenger. Tesla showed that a similar level of protection would be provided to occupants of different sizes and to those sat in different seating positions. In the side barrier test, the Model S scored maximum points with good protection of all body regions. In the more severe side pole test, dummy measurements of rib compressions indicated marginal protection of the chest. Protection against whiplash injury in the event of a rear-end collision was rated as good for the front and rear seats.

The Model S scored maximum points for its protection of the child dummies in the dynamic tests. Both dummies were seated in rearward-facing restraints and showed good protection in the frontal impact. In the side impact, both dummies were properly contained within the protective shells of their restraints, minimising the risk of head contact with parts of the vehicle interior. The front passenger airbag can be disabled through the user menu, allowing a rearward-facing restraint to be used in that seating position. However, the interface is not clear in all languages about the actions being taken to set the airbag status and the system was not rewarded. All of the restraints for which the car is designed could be properly installed and accommodated with the exception of the Group I universal restraint in the rear outboard seats. While the seat could be installed, the seat cushioning made engagement of the ISOFIX probes difficult. Integral child restraints are available as an optional third row in the Model S.

The Tesla is equipped with an ‘active’ bonnet. When the system detects that a pedestrian has been struck, actuators lift the bonnet to provide greater clearance to hard structures underneath. Tesla showed that the system detects all statures robustly over a range of speeds and the car was tested with the bonnet in the deployed position. Protection was adequate or marginal over most of the surface of the bonnet with poor results recorded only at the base of the windscreen and on the stiff screen pillars. The bumper offered predominantly good protection to pedestrians’ legs while the front edge of the bonnet gave good results towards the centre of the car but poor results at the outside edges.

Electronic stability control is standard equipment on the Model S. A seatbelt reminder is standard for the front and rear seats, as is a lane departure warning system that met Euro NCAP’s requirements. The Model S has a speed assistance system that can recognise the local speed limit and issue a warning to the driver when that limit is exceeded. The Model S is not equipped with an autonomous emergency braking system.